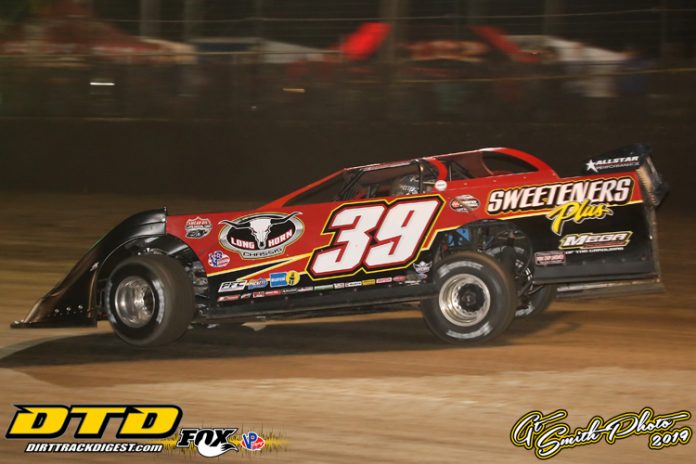 JUNCTION CITY, KY – Tim McCreadie picked up his first Lucas Oil Late Model Dirt Series victory of 2019 on Friday night at Ponderosa Speedway.
A record-setting crowd for the 15th annual John Bradshaw Memorial saw McCreadie become the fifteenth different winner on the tour this season.
McCreadie held off a mid-race charge from Tanner English to take his first-ever win at the d-shaped oval. English’s family owned Rocket Chassis finished in second, followed by current series point leader Jonathan Davenport, Don O’Neal, and Tyler Erb.
Billy Moyer Jr. and McCreadie made up the front row of the starting grid for the 50-lap main event. McCreadie charged to the lead at the drop of the green flag. Moyer Jr. held the second-spot until Kyle Strickler moved by him on lap ten. Strickler then pressured McCreadie for the race lead by closing on his bumper several times as the two entered heavy traffic.
The first caution of the race came on lap thirteen, just as the race for the lead was heating up. When the race resumed, McCreadie and English took the second spot after Strickler got stuck against the wall coming off of turn number two. At the halfway mark, McCreadie still showed the way with English in second and fifteenth starting Don O’Neal in his first race since mid-June.
O’Neal and Davenport went back-and-forth in the race for third and fourth for several laps. Davenport was finally able to clear O’Neal with four laps to go to earn a podium finish. Meanwhile, McCreadie pulled away from English in the waning laps to deny the Kentucky racer his first career Lucas Oil victory.
The New York native did his customary victory lane celebration to a cheering crowd. “It was very aggressive out there tonight. It was more demanding than I wanted it to be. Thanks to Longhorn Chassis, Kevin Rumley, Justin Labonte, Philip Snellen, and everybody else with the team. This car has won a lot of money this year. We keep parking it, so maybe we shouldn’t leave it in the stable anymore. It’s about time we finally won one of the Lucas Oil races.”
“It’s pretty cool to race here,” McCreadie added. “The crowd is right on you here with this d-shaped oval. We don’t normally run tracks like this. You can see when someone is coming behind you because the grandstand comes to its feet. So, I want to thank all the fans for helping me in lapped traffic. We have been working really hard on the shocks the last few weeks. This whole deal is tough, and we are just glad to be back in Victory Lane.”
English, who has been a frequent visitor at Ponderosa Speedway, was pleased with his runner-up finish. “I thought we might have had him [McCreadie] in lap traffic. I also thought I was the only one to make a softer tire work, but I was fading at the end and he [McCreadie] got away from me. I will take second against these guys any night.”
Davenport, who started eighth, charged to a third-place finish. “We have been working on this Longhorn program a lot. McCreadie has been catching up and doing really good. Kevin [Rumley] has been working with him and hopefully we can get him up to second in the points. I took my time at the start and was trying to save my tires until the end.”
The winner’s Longhorn Chassis is powered by a Cornett Racing Engine and sponsored by: Sweeteners Plus, Mega Plumbing of the Carolinas, Bilstein Shocks, D&E Marine, and Popejoy Plumbing.
Completing the top ten were Jimmy Owens, Kyle Bronson, Jared Hawkins, Josh Richards, and Earl Pearson Jr.
Lucas Oil Late Model Dirt Series
Race Summary
Friday, August 30, 2019
15th annual John Bradshaw Memorial
Ponderosa Speedway – Junction City, Ky.