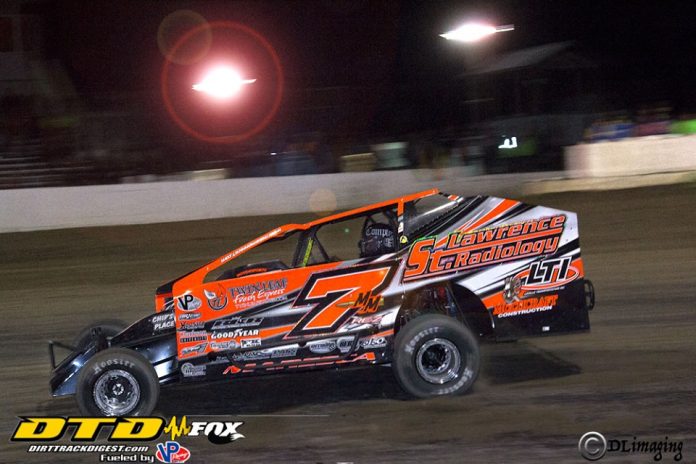 AWKWASANE, NY – It’s the time of year where everyone is excited and sad at the same time as the season long point standing came down to one event last night with Frenchie’s Chevrolet and Frenchie’s Ford on hand for the final regular season event of 2019 at the Mohawk International Raceway. With titles all but locked up in other divisions the Twin Leaf Stores 358 Modifieds saw Chris Raabe come into the evening with a 30-point lead on Michael Maresca, and it was hammer down in the 50-lap contest.

At the drop of green-flag it was Lance Willix taking control of the race over Tim Fuller, Preston Forbes, Louie Jackson Jr and Brianna Ladouceur. Willix was looking to win for the first time in exactly two years at MIR but Fuller was putting the pressure on in the opening laps. On lap 7 Fuller would take control of the field and start to pull away. The yellow flew on lap 7 as Ryan McLean spun his machine in turn two. When the green came back out it was Fuller in control again with Willix in second but Brianna Ladouceur would make a big move through the middle of the track to take over position number three and quickly close in on the top two drivers. By lap 20 Fuller had built up a comfortable advantage over Willix and Ladouceur but Michael MAresca was on the charge and looking to go to the front. He would take third from Ladouceur, then run down Lance Willix for 2nd and eventually get by. On lap 21 the issues continued for Ryan McLean in turn two as he spun once again. On the restart Michael Maresca knew the only chance wit have a shot at the championship was to win the race, and he kicked that off by driving by Tim Fuller on lap 22 and started put on a dominant performance. With Maresca in fron points leader Chris Raabe was fighting to stay inside the top 10 as he battled Carey Terrance and Madison Mulder for position and also fought to stay on the lead lap. With 10 to go Maresca had nearly a straight away lead and was beginning to lap in side the top 10 while Fuller started to chip away at the leader. Without help of a final yellow flag Tim Fuller and Lance Willix had no chance of catching Michael Maresca who soared to his 2nd win of the year and first in the MIR 358 Modified Series. Tim Fuller, Lance Willix, Brian McDonald and Louie Jackson Jr completed the top 5. Chris Raabe’s 7th place run with plenty good to lock up his 2nd Twin Leaf 358 Modified championship and first since his rookie season in 2011. Fuller would claim his third consecutive MIR 358 Series title with his runner up finish.

With title locked up by Shane Pecore one week ago in Crossroads Tobacco Sportsman it was about winning another race and that is what Delbert Legrow Jr wanted to do as he led early in the 25-lap event over RJ Tressider and Ricky Thompson. Legrow has had several good runs in his career but has never been to victory lane. RJ Tressider was also looking for his first win in just his first season in a Sportsman car as he stayed close by in 2nd over Ricky Thompson, Kristian Smoke and Zach Arquiett. On lap 12 persistence paid off as Tressider used the bottom lane to take over the lead and start to open up a comfortable lead. Ricky Thompson was also on the move as he took over the number two position and quickly closed in to put the pressure on Tressider for the lead. Wiyth 10 laps remaining it was RJ Tressider leading the way over Ricky Thompson, Zach Arquiett, Kristian Smoke and Devin Willis the top 5. The top two drivers were clearly the class of the field and were looking to settle it amongst themselves. A pair of cautions with 5 laps remaining were just what Ricky Thompson was looking for as he had one last chance to take the lead. On the final restart Thompson had no choice but to take the high lane and it proved effective as he would drive by on lap 22. With Thompson now in from Zach Arquiett and points leader Shane Pecore were all over Tressider for 2nd. In the end the struggles for Ricky Thompson were all forgotten as he finally scored his first win of the season at MIR. RJ Tressider held on for a career best 2nd place effort with Shane Pecore, Zach Arquiett and Devin Willis completing the top 5.

In Mod Lite action Kevin Foster had the title wrapped up after last week’s great run but really wanted his 4th win of the year. Scott Sharpe wanted to deny that as he charged to the lead over Brad Reif and Steve Comeau. On lap 3 Reif would charge down low to take over the top spot bringing a very fast Steve Comeau with him to 2nd and the battle was on. On lap 3 Comeau wasted no time as he used the top side to take over the lead and looked in great shape for his third win of the year. Harley Brown would have something to say about that as he made his way into the top 3 by the halfway point and was making a bid for his first win of the year. On lap 10 Brown was all over the leader using the bottom side of the track. With five to go Brown would make the pass for the lead and start to pull away. However Kevin Foster was also making a charge as he took over 2nd and closed in on Brown for the top spot. On this night however it was not to be as Harley Brown put all the struggles this season away and recorded his first win of 2019 in Mod Lite. Champion Kevin Foster would take 2nd over Steve Comeau, Nick Mallette and Brendan Villnave.

Jonathan Rush had not won in 364 days in Novice Sportsman at Mohawk and was looking to turn his season around as he took over the lead with Dan Beachard and Cory Castell giving chase. Rush had a great car and was looking to pull away from the field but a caution would fly near the halfway point giving Beachard and Castell one more shot at the leader. On the restart Rush didn’t fire like he wanted allowing Castell and Beachard to go three-wide for the lead but Rush was able to fend off the challenges and start to open up the lead once again. Over the remaining laps Dan Beachard and the rest had no chance of catching Jonathan Rush as he marched on to his first win in nearly one full calendar year at Mohawk. Dan Beachard would cross in 2nd with Dan Reif making a big move to take third at the line over Cory Castell and Michael Delormier.

The 10 lap Bandit feature saw Francis White lead early as points leader and newly crowned track champion Matt Zira would make a charge to the front. With 5 laps complete the shot for Francis White to claim another win all went away has he lost a tire on the front stretch ending his great run. This left Matt Zira in front and with a fast car was able to pull away from Jeff Putnam over the final laps to record his third in a row ad 8th win of the season. Jeff Putnam would score his 2nd straight runner up effort with Nick Perham taking the final podium spot.

With the regular season now complete, the attention shifts to the Mohawk Nationals in two weeks-time. A reminder to all fans that there will be no racing at MIR as we prepare for the biggest even of the season. For more information on ticket prices, camping and schedule of events check out mohawkintlraceway.com and follow us on our Twitter and Facebook pages as well.