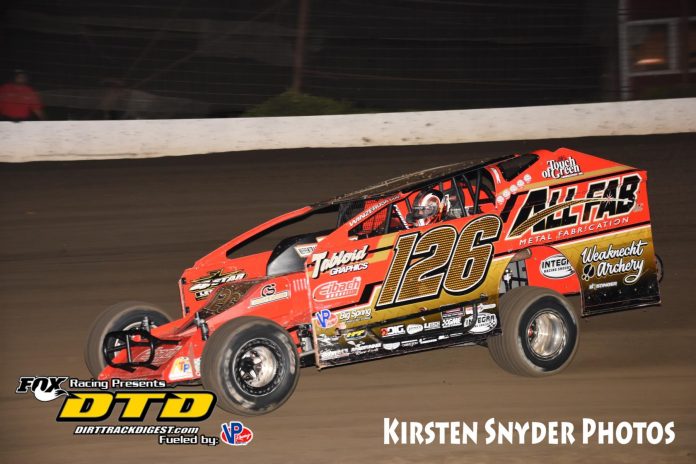 BECHTELSVILLE, PA – Jeff Strunk, ten-time Grandview Speedway Modified point champion, came through the pack from his 11th starting berth in the TP Trailers NASCAR 358 Modified 30-lap feature on Saturday night and was able to catch up to first and second place runners Ron Kline and John Willman, somewhat hindered by lapped traffic, by the 22nd lap to make it a three-way battle for the lead.

Strunk finally cleared Willman with three laps to go. Seeing the white flag in starter Ray Kemp’s hand, Strunk passed Kline and went on to chalk up his fourth win of the season. Strunk was pleased with the track preparation and commented the victory was for No. 126 car owner Glenn Hyneman, who was not in attendance since he was not feeling well.

Brad Arnold overtook rookie leader Scott Kohler on the 15th lap of the 25-lap TP Truck Equipment NASCAR Sportsman feature and went on to become the 13th different winner in the division when he claimed his first win of the season over runner-up Jack Butler in the caution-filled event.

Former late model driver Andy Ressler, now competing in the X-cel 600 Modified class, “finally found a division he could win in at the track.” He passed leader Matt Warner with two laps to go in the 20-lap feature and went on to score the win.

The popular Blast from the Past Vintage racers are part of another tripleheader show on Saturday, September 7 along with the T.P.Trailers NASCAR 358 Modifieds and T.P.Trucks NASCAR Sportsman racers at Grandview Speedway. Racing gets the green at 7:30 p.m. Spectator gates open at 5:30 p.m.

Providing the feature winners met the necessary requirements, they received monetary awards from T.P. Trailers and a certificate from VP Fuels for product awards. The Dan’s Deli ½-way hoagie award recipients were Kline and Kohler. Wyatt Harrar, a rookie who just recently started in the division and placed 12th, received an extra $100 for being the highest finishing crate engine driver.

As usual it was Willman taking the early lead at the start of the Modified feature with pressure from Kline, Jesse Leiby, Mike Lisowski and Briggs Danner.

Kevin Hirthler spun in the second turn to bring out the yellow with four laps completed. A two-car second turn incident voided the restart. On the next attempt Kline charged past Willman to become the new pacesetter.

While Kline showed the way Willman and Ray Swinehart engaged in a side-by-side dual for second occasionally swapping paint.

At the conclusion of the 22nd lap Kline, Willman and Strunk were all vying for the lead with neither one giving in.

Strunk overtook second on the 27th lap and set his sights on Kline, who was in search of his first career win in the division gathering many wins and even a championship in the Late Model division before making the switch to the Modified ranks.

Kline’s hopes of victory were erased by Strunk with one lap remaining. After several tries Strunk finally succeeded to pass him to claim his 73rd Saturday night career win. Posting his best finish was Kline trailed by Willman. Swinehart and Lisowski, fourth and fifth place finishers finally had a changed of luck to have their season best run.

The red was thrown on the fifth lap after Mark Kemmerer was got into the first turn infield track tire which in turn caused him to make contact with the tire sending it onto the track and then he flipped up and over it. He was uninjured. Management deemed Andrew Kreis responsible for the incident and sent him pit side out of competition for the remainder of the race. Kohler resumed the lead on the restart with Beck, Arnold, Jesse Landis and Mike Mammana in pursuit.

Arnold moved into second to challenge Kohler on the seventh lap restart needed when Mohr was spun along the backstretch.

Within a few laps Kohler and Arnold were in a door handle to door handle battle for first and no matter how many bids Arnold made to get by him, they were unsuccessful.

The final caution period, in which there were several, was on the 15th lap when Lex Shive stopped in the fourth turn. At the same time Keith Brightbill, the current point leader went pit side with a flat tire while running fifth and never returned to competition. When action resumed Arnold charged into the lead.

In a few laps Arnold had a comfortable lead built up and was now being chased by Butler, Kohler, Landis and Ryan Beltz.

Arnold never looked back and went on to tally up his fifth career win followed by Butler, Kohler, Landis and Beltz.

Jimmy Leiby, Mammana and Bock were the heat winners.

In the X-cel 600 Modified feature Matt Warner was the early leader at the drop of the green with Ressler righty on his bumper along with Hunter Deihl, Brianna James and Jeff Sechrist.

Ressler led the way for the final laps to claim the win. Finishing second was Warner followed by Korey Inglin, Jeromy Guistwite and Jon Josko.

The final NASCAR point races of the season are set for Saturday, September 14 as WNPV-AM Radio Champion’s Night is presented. The T.P.Trailers NASCAR 358 Modifieds and T.P.Trucks Equipment Sportsman will battle it out for the lucrative championships and top point finishing positions.

Fans will have the opportunity to win pairs of tickets for the NASCAR Monster Energy Cup race, October 6, at Dover International Speedway along with a four pack of “ride all day with coaster” tickets to the popular Knoebel’s Park, America’s largest free admission park which features the #1 Wooden Roller Coaster in the world, the Phoenix, all courtesy of WNPV.

Lap sponsorships and heat race sponsorships for the September 21st Freedom 76 are available $20 for laps and $200 for a heat race. Check in with Tina Rogers or Tommy Kramer at the track. Telephone Ernie Saxton at 267.934.7286 for complete information. Doug Manmiller Electric and Stoudt Auto Sales have signed up to sponsor qualifying heat races along with BFP Specialties and Bashore Trucking while T.P.Trailers and Truck Equipment are sponsoring ten laps.