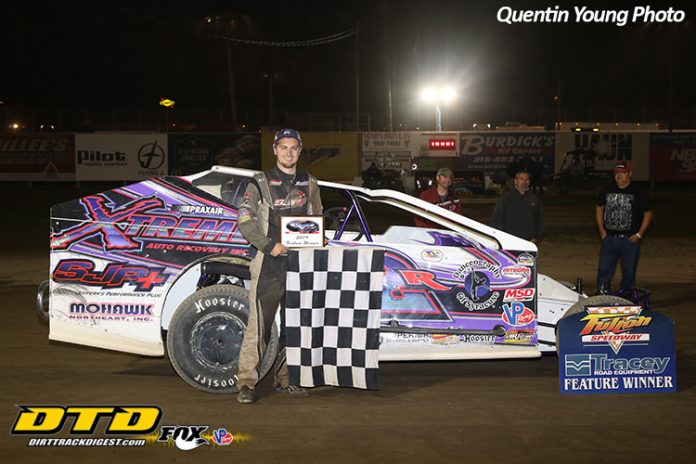 Jeff Sykes and Ronnie Davis III went to battle early in the 35-lap Modified main, with Davis taking the lead from Sykes on lap four. An early yellow on lap seven kept Davis in check, and after the restart was followed by Tom Sears Jr., who worked past Sykes for second. Tim Sears Jr. also cracked the top five from 17th, knowing only a win would get him the track championship.

Tim Sears Jr. was on a rail, driving by Sykes and Pat Ward to grab third by lap 12. He quickly caught and then disposed of Tom, moving to second on lap 16. However, Davis was a ways out, holding a three second lead as the race hit the halfway mark.

Davis’ line was right around the top of the surface, and the cushion was slowly moving up as the race progressed. Sears was making all his speed down low, running right around the tires. By lap 25, Davis’ lead was significantly less than what it was before, as the top two battled through traffic. Through traffic, Sears ended up moving towards the top of the track, but still not as high as Davis.

With five laps left, Davis’ lead was just about gone. Sears was there, and showed his nose low. To counteract, Davis dropped low too, leaving Sears to find another line. Sears still gained some time in the final laps, but catching and passing are two different things. When the checkered flag waived, it was Ronnie Davis III scoring the win by a carlength over Tim Sears Jr., Tom Sears Jr., Rob Bellinger, and Pat Ward.

“We’ve had a pretty tough year this year,” Davis said. “It’s been up and down, we started off with the Big Block win at Brewerton and it’s been a rollercoaster since. Our car tonight was amazing, I saw Timmy underneath me in the last laps so I knew I had to do something. It was tough because I didn’t know where was faster, but I knew he was down there so I figured I’d try it.”

Larry Wight was crowned champion of the division under unusual circumstances. Wight was out of town at the Super DIRTcar Series race at Lebanon Valley, but had a big lead over Tim Sears Jr. in the points. Had Sears got by Davis and won the feature, he would’ve won the title, but because Sears finished second, Wight won the title by a single point, even though he wasn’t in attendance that night.