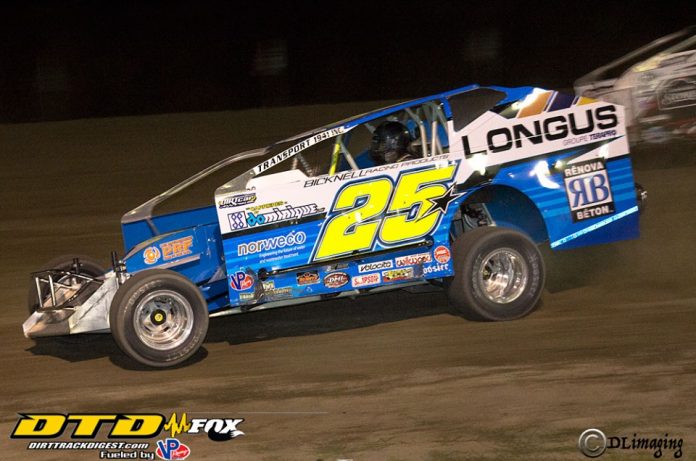 Chris Raabe led the field to the green in the 30 lap feature event, using the top side in the early portion of the feature.

Bernier quickly worked his way to the second spot on the first lap, before passing Raabe on the inside lane toward the midway point of the event.

It was smooth sailing for the driver out of St. Hyacinth, Quebec the rest of the way, picking up the victory, and the 2019 championship.

Connor Cleveland used the inside to his advantage to win his seventh Poirer’s True Value Sportsman feature event of the 2019 season. However, it was not enough to make up a 22 point deficit in the standings.

Adam Pierson drove his way to the second spot, clinching his first track championship at the Plattsburgh Airborne Speedway.

Justin Severance had his best run of the 2019 season to finishing third, fourth was Lonnie Rivers, and finishing fifth was Derrick McGrew Jr.

C.D. Beauchamp, Marc Lalonde, and Jocelyn Roy put on a show at the front of the field in the Hartson Total Opening Pro Stock feature event. Beauchamp came into the event just six points ahead of Lalonde in the championship standings.

Those two along with Roy were battling for the win in the late stages of the race, before the 48 and 8 pulled away.

Beauchamp’s championship aspirations came to an end after contact with Nick Stone on the front stretch with just three laps remaining.

The Ernie’s Discount Tools Superstock’s ran double features, with a make up event from June 29th.

In the first feature, Jim Mckiernan held off Tylor Terry to pick up the victory.

The Chris Frennier Motorsports Strictly Stocks also had two feature events, and it was Nathan Smart sweeping them both, picking up wins nine and ten on the year.