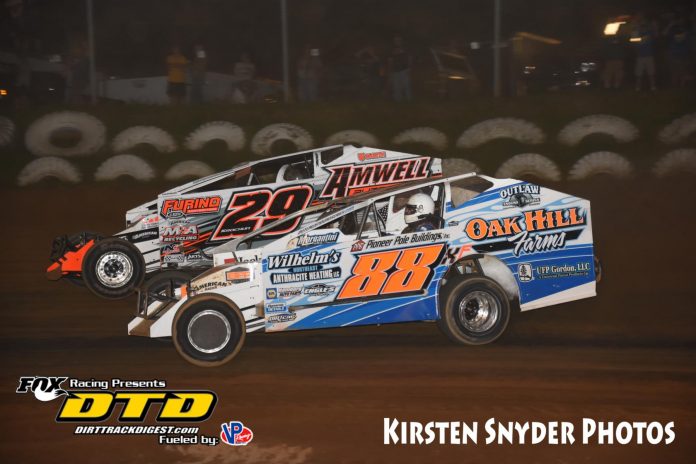 POTTSVILLE, PA – With the richest payday ever offered at the Big Diamond Speedway to the winner of the Jack Rich, Inc. “Coalcracker 72”, you just knew the racing would be top notch and at night’s end the capacity crowd would not be disappointed as Craig Von Dohren fought off the charges of Brett Kressley and Duane Howard to take home the huge win.

“That was a helluva race,” said an excited Von Dohren as he exited his car in victory lane. “I didn’t’ know where to go and I didn’t know what to. When you take the lead early like that it makes it hard because the track changes. I ran the bottom early and saw (Alex) Yankowski was up to second during the yellow and I knew he drew bad so I figured the top was good so I moved out there and then the track started to move to far out so I moved down again and then it’s just a matter of moving around to find the right groove. Brett (Kressley) got me there when I got stuck behind a lapped car but once we were able to clear the lapped car I was able to get my momentum going again on the bottom and work my way back by him to get back in front. “

Kevin Beach and Nick Rochinski would lead the field to green in the richest paying Coalcracker race ever with Beach getting the jump to lead the way. The first caution of the night would come out on lap one when outside pole-sitter Rochinski stopped coming out of turn four ending his hope of a huge payday. Back to green flag racing and Beach remains the leader with fourth place starting Craig Von Dohren making moves to the front. Von Dohren would wrestle second away on lap four and one lap later would drive underneath Beach to take over the top spot.

Once in front, Von Dohren would start to pull away as the action behind him was starting to heat between Danny Bouc, Duane Howard, Ryan Godown, Jeff Strunk and Richie Pratt Jr all battling hard to catch the leader Von Dohren. Lap 13 saw another player enter the fray as modified rookie Alex Yankowski was making his towards the front from his twelfth starting spot. Yankowski was flying on the outside and by lap 19 was the new second place runner and starting to rundown the leader Von Dohren.

Just as Yankowski was starting to pressure Von Dohren for the lead, the caution would come out for a slowing Cale Ross. Von Dohren would once again lead the way on the restart as Brett Kressley was starting to make his presence felt as he entered the top five. Billy Pauch Jr would bring out the yellow on lap 25 with a right rear flat with Von Dohren leading over Yankowski, Godown, Kressley & Howard.

Back to racing and second place running Yankowski gets out of shape going through turns one and two allowing multiple cars to go by dropping him out of the top five. Von Dohren continues to lead the pack with great racing behind him as Godown, Kressley, Howard and Timmy Buckwalter are all going at it within the top five. Consecutive yellows on laps 35 and 37 would stop the race for the mandatory fuel stop with the top five consisting of Von Dohren, Howard, Kressley, Godown and Strunk.

When the field returned to racing it was once again Von Dohren to the point as seventeenth place starter Mike Gular entered the top five looking to throw his hat into the mix. The last yellow of the race would be displayed on lap 40 when the car of Buckwalter slowed to a stop.

The remaining 32 laps would run caution free as the crowd witnessed possibly the best racing ever during the running of the Coalcracker race and maybe ever at the speedway as the track’s two leading feature winners of all-time Von Dohren and Howard along with the young veteran Kressley swapping spots amongst themselves in the one the most cleanest hard-fought battle this writer has ever saw.
Von Dohren running the inside while the young Kressley was giving it everything he had up on the cushion trying to make the pass. Kressley could pull even with Von Dohren through the turns but just couldn’t get the momentum off the corners to complete the pass. Howard lurked right the behind the two leaders in third just waiting to capitalize on a mistake by either of the top two. Howard would get by Kressley for second only to have Kressley power back around a lap later to get back to the runner-up spot.

Von Dohren kept plugging away in the lead as Kressley again went back to the extreme outside with lapped cars now starting to enter the picture. Lap 61 saw Kressley pin Von Dohren down low behind a lapped car as he cruised by on the outside to take over the top spot. However, the veteran Von Dohren was not rattled. One lap later as they cleared the lapped cars Von Dohren would start to work his way back under Kressley to regain the lead.

Lap 62 saw Von Dohren make the low line stick as he was back in front. With ten laps to go it was the same three still going at it hard for the win with Gular a distant fourth. Von Dohren, Kressley and Howard were running under a blanket as the laps wound down with Kressley still trying hard up on the wall with Howard working the bottom both trying to work by the leader Von Dohren. Howard would work his way past Kressley for second and started to work his way by Von Dohren but just couldn’t find that extra gear to do so. The final five laps saw the three leaders race clean and hard as they started to come up on some more lapped cars. Von Dohren was able to hold off the charges of Howard and Kressley to go on and win his fourth career Coalcracker race and take home the big prize of $17,000. Kressley would sneak by Howard at the line for second with Gular and Frank Cozze the top five. Sixth through tenth would be Strunk, Godown, Pratt, Pauch Jr and Rick Laubach.

“I’m kind of speechless right now”, cited Von Dohren. This race was good money and I’m thankful everything stayed together tonight, and I was able to drive my race. We’ve struggled here the past couple of weeks and changed a few things and it all worked out for us. There are a lot of people who help me and my wife to make this all work, Dave Dissinger for providing me these cars along with Bob Greene of Pioneer Pole Buildings, Jason Bashore, Nick Gatto, Doug Rose and all the people that support me. This is great!”