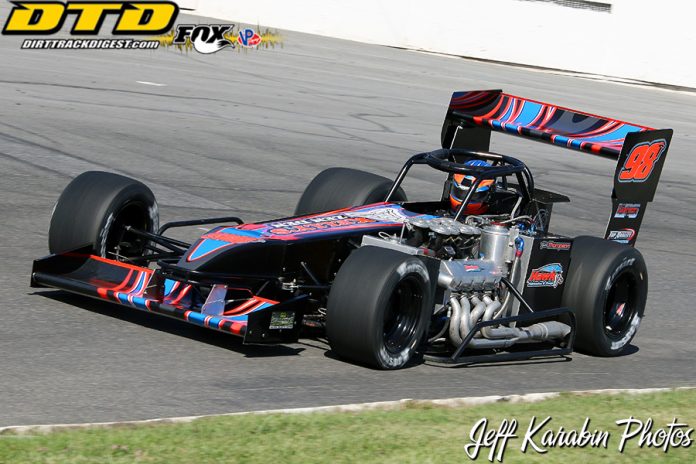 In one of the most dominating performances in recent history, 17-year-old Tyler Thompson captured the International Classic crown on Sunday at the historic Oswego Speedway.

Staring fifth on the grid it took him only about 13 laps to taste the lead, and after swapping the top spot, in the back stretch with Brandon Bellinger, Thompson took over and was never heeded.

There were times early in the event that his advantage would balloon to nearly eight seconds. However, on the 56th lap he slowed from the 16 second bracket to 20 seconds. This allowed the field to close in, but the tease was over as he got back on it and took over.

He never again trailed in the event which was just his second International Classic.

Standing alongside the podium wearing the champions’ wreath and the Budweiser sponsor hat whose product he can’t touch for four years, Thompson was quite composed.

He said, “I’m emotional right now and I am happy for the crew and sponsors that have supported us.”

Reflecting on that loss of a several second lead in the first half of the event, Thompson explained, “Well I slowed down, but I was barely touching the gas. I wanted to save fuel and tires if I could. I didn’t want to screw up the fuel. I did run out of fuel, but it was when I got to victory lane.”

Though he dominated a veteran field of Supermodified drivers, he said, “It had some close calls out there. Passing Rayvals was tough as he was using the bottom and the top. He was running good and he was tough to get past.”

Continuing he explained, “I did have a close call as everything got bottled up there in the third turn and I nearly had contact with Camden (Proud).”

He could see on the scoreboard and the video scream that D.J. Shullick was coming and he said, “I thought he might be right there as I didn’t really know how much of a lead I had.”

Tyler knew that weather could be a problem as rain was in the area throughout the day. However, it held off until well after the checker flag had flown.

He explained, “I was concerned about rain and that’s why I went out so fast. I was hoping for rain any lap after 100.”

In talking about his strategy he said, “I paced myself for the first three laps and wanted to stick in the lead just in case.”

Thompson has come a long way in a very short time as he shattered the track record earlier this season (only to see it broken by Brandon Bellinger on Friday night) and captured his first regular season Supermodified feature.

The Hawk chassis was a former Tim Devendorf owned car who his dad Jason Simmons said, “Tim and his guys helped us all last year when we bought the car. Dave Iosue came over right after we bought it and helped us out and John Colloca has been there for us along with Mike Ceterski. Otto (Sitterly) and Joe Hawksby have been just or call or text away.”

The team adapted to the coil over style and it has worked for Tyler.

Thompson is quite confident and when asked if he thought he’d be standing in victory lane on Classic Sunday he said calmly, “Yeah, I thought I could be here. The win earlier this year really gave me confidence in myself.”

Continuing he said, “Otto (Sitterly) and (Mike) Barnes have really had the most impact on me as a Supermodified driver and really have to thank them for all they have done for me with advice and direction.”

The weekend was rough with motor woes and disappointment of not being able to run the ISMA show.

The season isn’t over as the team will head to Star for the Classic next weekend and then the special event at Lucas Oil Speedway which was formerly Indianapolis Raceway Park.

In October he will take out his dirt 358-Modified to compete in the small-block portion of Super Dirt Week. He also has a big-block at his disposal, but for the time being the focus will be on the small-block.

However, Sunday was a day this team will never forget.

A year ago Tyler explained, “We were 12th or 14th running okay and got in a wreck and did not finish.”

That can all be forgotten now as Tyler Thompson wears a title that few can claim ownership to…the winner of the Oswego International Classic.