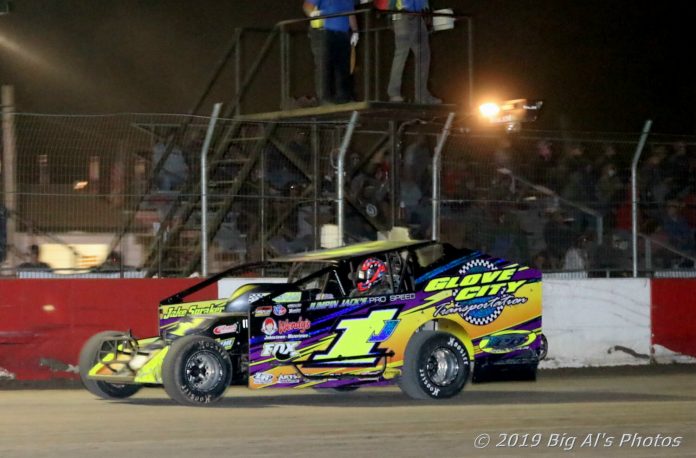 WEST HAVEN, VT – Rocky Warner was the last driver to pull through the entry gate at Devil’s Bowl Speedway on Sunday, September 1, but he was first in line at the payoff window after the Interstate All Battery Center Vermont 200. The Gloversville, N.Y., racer unofficially pocketed $14,490 at the event – the largest winner’s purse in the history of the northeastern crate-engine Sportsman Modified division.

In addition to Warner’s big win, Plainfield, Vt.’s Will Hull turned in a dominating performance in the Sprint Cars of New England race to sew up his second-straight track championship at Devil’s Bowl.

Long-hauling Buffalo, N.Y., runner Inman exited the race while running in third place after a rear end gear failure at lap 77. East Corinth, Vt.’s Adam Pierson – after a dreadful qualifying effort – marched from 27th starting position into the top 10 but ran out of fuel at lap 84 and coasted to a stop, bringing out a caution flag. Warner, meanwhile, had methodically worked his way from the 14th starting position into contention, and tracked down leader Hearn to run in second place at the 15-minute halfway break with 100 laps completed.

Hearn initially ran up front after the halfway restart, but Warner got by him on a lap 109 restart and led the rest of the way. Warner was not unchallenged, though, with 10 more restarts in the second half, but he held off all comers including Hearn, Groff, Bobby Hackel, and a late-charging Kenny Tremont Jr.

Pierson made his way into the top five late in the race and escaped from the final incident with nine laps to go, when third-place driver Hackel swung sideways in Turn 1 and he and Pierson made contact, spinning Hackel around; Marc Johnson, who was running fifth, had nowhere to go and crashed into Hackel, sending both drivers to the back of the lead-lap cars.

At the finish, Warner drove away from Tremont and Pierson to collect the $12,000 top prize and an unofficial take of $2,490 in lap leader bonuses. The victory was Warner’s first-ever at Devil’s Bowl and his 18th overall win in 2019; he clinched the Fonda Speedway Modified championship in August, has dominated both the Modified and Crate Modified divisions at Glen Ridge Motorsports Park, and was a winner at Albany-Saratoga Speedway.

“Don’t tell [car owner] Jake Spraker that we were late getting here, because he won’t be happy about that,” Warner joked in Victory Lane, “but hopefully the money makes up for it. This is probably the biggest win of my career right here. The car was perfect.”

Tremont held Pierson off for the runner-up spot and earned $4,000, with Pierson grabbing $2,500. Hearn finished fourth for $1,700 and added an unofficial total of $3,224 in lap leader money to end up just shy of $5,000. Local racer Tim LaDuc came from 23rd to finish fifth for $1,200. Comes rebounded from a late-race slide off Turn 3 to finish sixth ahead of Robert Bublak, Kevin Chaffee, Vince Quenneville, and Corey Cormier.

The sealed General Motors “602 crate” engines from the Warner, Tremont, and Pierson cars were all impounded following the race and will evaluated during a technical inspection during the week.

Fifty-eight cars attempted to qualify, with heat wins going to Groff, Scarborough, Mike Palmer, Frank Hoard III, and Hector Stratton. Consolation wins went to Darryl Mitchell, Chaffee, and LaDuc, and last-chance B-Feature wins went to Pierson and Wayne Stearns.
Will Hull claimed his second-straight Devil’s Bowl Sprint Car championship with a dominant run in the 25-lap Sprint Cars of New England (SCoNE) feature. Chris Donnelly led the first 13 laps before Hull sailed past and cruised to his second win of the season on the half-mile oval. Hull did so despite breaking a power steering line during the race and was covered in fluid when he exited his car in Victory Lane.

Double-duty driver Pierson – who had an engine fire in his qualifying heat and got soaked in hot oil – made a miraculous comeback for the runner-up finish. Josh Flint ran third in his first appearance at Devil’s Bowl Speedway and picked up a $100 bonus as the top driver with a smaller 305-cubic-inch engine. Jake Williams and Clay Dow completed the top five.
Former SCoNE champion Dan Douville of Bridgewater, N.H., was transported to two hospitals after flipping his car in qualifying. Douville walked to an ambulance under his own power but was taken to nearby Rutland Regional Medical Center and later transferred to Dartmouth-Hitchcock Medical Center in Lebanon, N.H., with a neck injury. He is expected to fully recover.

Devil’s Bowl returns to action on Sunday, September 8 at 6:00 p.m. with a full five-division card of weekly racing and the popular Street-Legal Spectator Races. General admission is $12 for adults, $10 for seniors (62+), and free for kids age 12 and under.