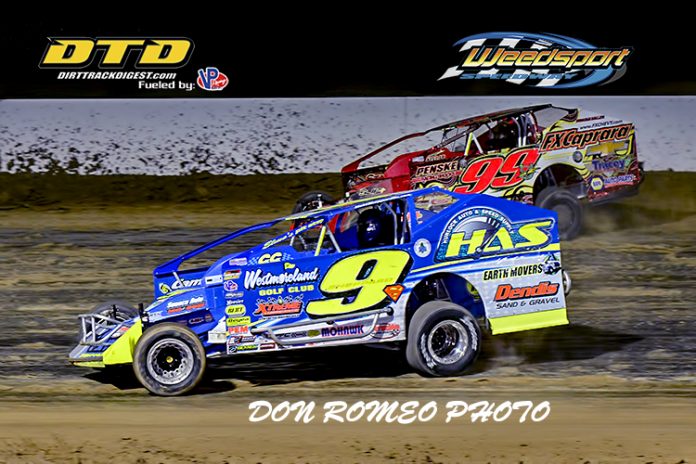 WEEDSPORT, NY – Super Matt Sheppard beat out Series stars Danny Johnson and Larry Wight in a stunning three-car battle for the win. However once the No. 9S got out in front, it was Sheppard’s show at the front of the field. The Doctor Danny Johnson finished second but led much of the first half of the race. Johnson and Wight battled wheel-to-wheel in the waning laps but Johnson edged out the Gypsum Racing No. 99L to put himself on the second step of the podium. Wight flashed across the line in third.

For the eighth time in 2019, Matt Sheppard climbed atop his No. 9S Big Block Modified to celebrate a Super DIRTcar Series victory. Sheppard is now inching away from Erick Rudolph and Mat Williamson in the standings as the season winds down. To be sure, the win was far from easy.

“It got pretty wild there,” Sheppard said. “I got rolling on the bottom and Danny [Johnson] was caught in the middle. I think we were trying to lap Jimmy [Phelps] and he couldn’t get by him and I couldn’t get by Jimmy. We were jammed up for a long time. Then all of a sudden here comes Larry [Wight] around the outside of all of us.”

“We were fortunate to get through that mess of lap cars out in front. Then after the yellow and I figured I better go back to the top because of anybody’s going to drive around me it’s Larry Wight,” noted Sheppard.

A system of soaking rains moved through the area in the morning of the race. That appeared to have created a much different set of track conditions on the historic Weedsport Speedway than the drivers were expecting or used to.

“The top surprised me a little bit. I had thought the top was going away and I was glued to the bottom. Then I found a little something at the top of one and two. Larry showed us the line up there. I was quite surprised had the end of the race to be running the top instead of the bottom,” Sheppard detailed.

Fan-favorite Hall of Famer, The Doctor Danny Johnson was the early leader until Sheppard and Wight pounced.

“Matt [Sheppard] has been good all year. You gotta give credit where credit is due,” Johnson said in Victory Lane.

“We ran a good race and just needed to be a little bit better,” said Johnson with a grin and an emphasis on little. The second-place is one of the best finishes in a while for the No. 27J.

He needed a little more to take the fight to Sheppard.

“I think he [Sheppard] was running the top a bit better and I was stuck in the middle. I thought I was good there but obviously I wasn’t.”

Third place finisher Lightning Larry Wight made an incredible pass for the lead when he used the top side to get by leaders Danny Johnson and Matt Sheppard. But Sheppard and Johnson battled back in the thick of lapped traffic.

Sheppard managed to overtake Wight and then the caution flag came out a few laps later. From there it was difficult to get the jump on Sheppard and Wight was forced to settle with a third.

It was a difficult day for The Baldwinsville Bandit Jimmy Phelps. The No. 98H struggled in Time Trials and then finished his Heat Race on the outside looking in. From there he went to the Last Chance Showdown and still missed a transfer position. However, the HBR machine came to life at the right time and Phelps picked up thirteen positions, which was good enough for twelfth.

The Greek Streak Demetrios Drellos took his second Billy Whittaker Cars Fast-Time Award of 2019. His previous quick time came at Cornwall Motor Speedway. Drellos raced hard in the top ten all race and was rewarded with a solid seventh-place finish.

At every Super DIRTcar Series race, one driver in the Dig Safely NY 811 Redraw has to draw the worst position, twelfth. As a saving grace, that driver is also awarded one free tire from Hoosier Racing Tire.

Next up the Series rides North to Quebec for a stop at Autodrome Granby on Friday, September 6 and then to Le RPM Speedway Saturday, September 7.