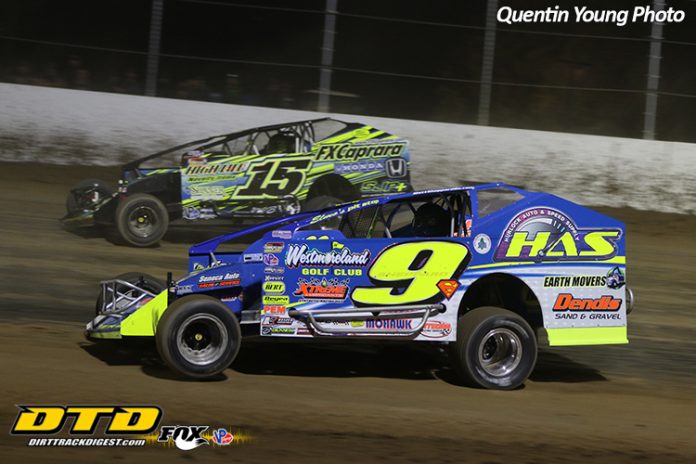 Matt Sheppard has his work cut out for him throughout the first three quarters of the Labor Day 100 Super DIRTcar Series Modified event at Weedsport Speedway, but in typical fashion ran away from the field for his third win of the year at the Taj Mahal of Racing.

The bottom is where Matt has been successful at the ‘Port, and looking back at the race he told Dirt Track Digest, “It’s been a while since I’ve run the top that good here. You could grip the bottom, but you just could not carry any speed.”

There were some moments during the event that slowed the 9s down a bit as he explained, “Danny (Johnson) wasn’t the problem trying to get by him. It was Jimmy Phelps (a lapped car) as he was fast and we were both working the bottom. Once I got past Jimmy I think it was sort of a turning point. Traffic was tough tonight and everyone was fast. It was easy to catch someone out there, but it was another thing to pass them.”

Sheppard lived on the top side throughout the late stages of the race and “Larry showed me a line and I moved to the top. It surprised me that we were able to find something on the top between one and two.”

Just past the halfway point there was one of those “wow” moments as Matt, the Doctor and Larry Wight were in heavy traffic.

Matt was chasing the 27j on the lower side of the track. He said, “Things got really jammed up with traffic and all of a sudden there goes Larry around us to the lead. The yellow came out shortly after and I had a clear track.”

The Doctor and Wight finished second and third, but that wasn’t decided until the 98th lap.

On Victory Hill, the Doctor was asked about the difference between Matt Sheppard and himself and in typical Danny Johnson style he said, “One position.”

Danny said, “We’ve had a good race car all year and ran a good race tonight, but we needed to be a bit better. Matt just ran the top better than me tonight.”

Third place Wight had what could have been a frustrating night as the motor on his primary car shut off on the first lap of hot laps. The crew swapped cars, changed tires, gears and shocks while also making other adjustments and he qualified for the draw with a third place heat finish.

As far as the race went, Wight noted, “I really needed the green to stay out. I really think we were better in lapped traffic and Matt was better in open air. We started seventh, which is really the perfect spot, because if you start fifth through eighth you can see the lines and where people are running.”

Billy Decker ran in the top three throughout the second half of the race and was top five all night long. He settled for fourth after some wild action in the late going. The heated battle between Danny, Mat Williamson and the 91 was classic as they diced for third.

In the closing laps he was chasing down Johnson and teammate Wight was right with them.

In the end Decker settled for fourth and said, “We struggled a bit.”

Continuing he said, “Not a bad night, but just not good enough to pass cars when we needed to.”

Williamson started 14th and fought his way up for a fifth place finish.

Mat said, “We had a good car tonight.  We were probably better than where we finished. It was tough to pass, but overall I’m happy with it. The guys worked hard and I was not good early, but they trusted me and made adjustments.”