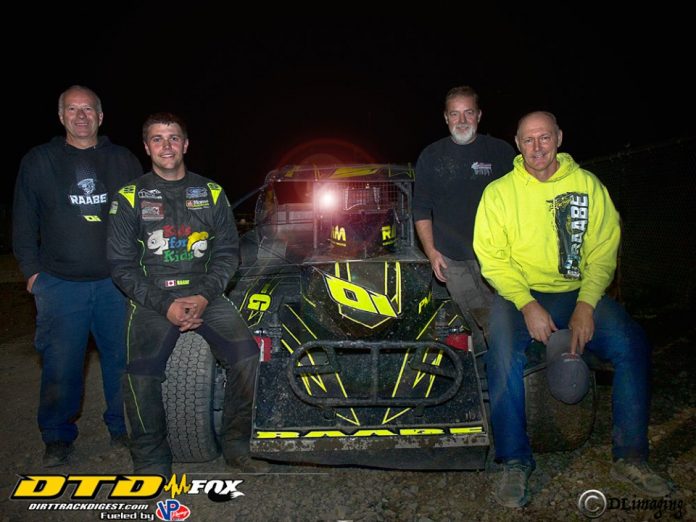 Team Raabe came into the final points race of the season at Mohawk International Raceway with a 28-point lead over Mike Maresca. The week prior, Chris only had a 16 point advantage over Maresca and knew he had to finish well, even though the team was concerned about the cars durability. In the end, Chris won the race stretching his lead in points setting the stage for the final race of the season at MIR.

Going into the final race Marasca knew he had to bring his A-game to the track that night while Chris just had to finish 12th or better.

Marasca started a row ahead of Chris in the Feature and the only chance he had at the title was to win the race and hope Raabe would finish well back in the field.

Marasca pulled out all the stops in the feature driving through the field to take the lead on lap 22.

Yes, Marasca was on a tear and was lapping the field, but Chris, a well-groomed driver knew if he stuck to the plan the title was his. Chris explains: “We came into the final race knowing all we had to do was finish 12th or better to take home the championship. I knew going up against Mike Maresca was going to be a tough race, especially after drawing the 11th starting position. The plan was to move up as far as I could during the race, but at the same time staying out of trouble on the track along with preserving the car. In the end, we accomplished both, which secured the championship. This championship for me is especially sweet as the team has been struggling since mid-season but through it, all the team came through. I would like to thank Marc Legault, Stephane Gauthier, Emelie and of course, my Dad for all there support.”

This being his second track championship, the first coming in 2011, but this one was bittersweet. This small team from Alexandria, Ont., worked hard for this championship overcoming numerous obstacles along with a limited budget.

All in all the team managed three wins at Mohawk along with a couple of podium finishes and nine top-five finishes this season. It’s clear that the consistency really payed off.