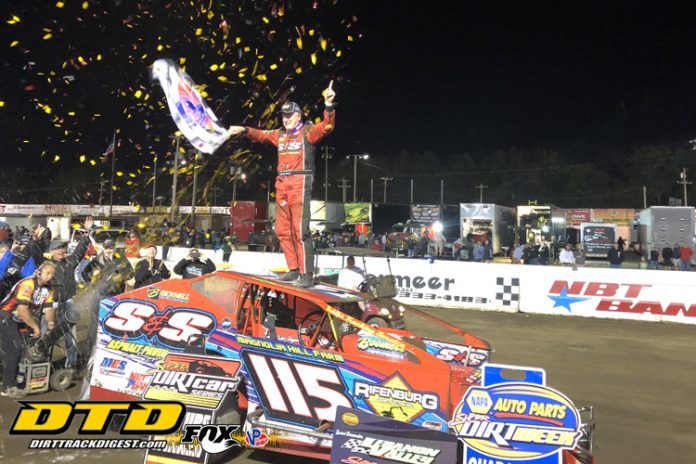 Friday found us at our normal race place, Albany Saratoga.  Walking into the speedway we saw a familiar face wearing a driver suit, Allana Jordan, who drives the No. 24 in the Four Cylinder single cam division.  Allana quickly shared that she is the current point leader in her division.  With one win and several great top five finishes she is hoping to win the title at the Malta oval.  It would be her first title ever.  With Allana on Friday was her mom, Valene.  We asked Allana if she would like to move up to another division and she quickly responded that she would like to drive in the rookie sportsman class.  Allana didn’t race last season but in 2017 was third in Four Cylinder points at the track. As we walked through the fan side we spotted a couple we were used to seeing for many years at Lebanon Valley and Fonda,  Leonard and Tina Sutton worked for the Grady’s at the photo booth over the years.  Tina is currently confined to a wheelchair because of major health issues but as diehard race fans they still want to be at the races.  Our thoughts and prayers are with them both.

A post on Facebook told us that Jimmy Nagle was running his final event behind the wheel of his No. 10J.  We spoke with Jimmy and he said, “I do this 100% and not having the money or time to do that I decided to hang it up.” He plans to still be at the tracks helping others.  He is selling all his equipment if anyone is interested.  We are sorry to see him go and we wish him well. We try to write about all racers, especially those who may not get much time in the limelight.  After this past weekend we felt compelled to write about multi-time winner at tracks from Canada to Florida, Kenny Tremont, Jr.  Why?  Because he had one heck of a weekend and because Ed has known Kenny since he was five years old; Kenny’s grandmother was Ed’s godmother.  We were at Lebanon Valley when Kenny recorded his first ever Modified win, May 29, 1982.  He didn’t wait long before getting his second win, the following night he went to Devil’s Bowl Speedway in Vermont and won there also.  On Friday night at Malta Kenny started 15th in a 32-car field and showed he has not lost any of his driving ability.  At the end of 35 laps, Tremont found himself in a familiar spot, victory lane at the “Great Race Place.”  It was his 77th win at the track.

The following night he moved on to his longtime home, Howie Commander’s high banks for the 101-lap Mr. Dirt Track USA, Super DIRTcar Series event, a race he had won five previous times.  Using all his years of experience in the closing laps he took the lead from Ronnie Johnson and went on to victory lane to claim his sixth Mr. Dirt Track USA title and $25,500.  It was his 137th win at Lebanon Valley and his 382nd career win. Ed and his brother, Rich took the opportunity for a photo opt with Kenny after Mr. Dirt.  It was one great Mr. Dirt Track event and we remember the first ever when lovable Les Alberti found victory. At the start of the night, Ed met with DIRTcar Series announcer, Shane Andrews and presented him with a gift that he knew he would cherish and he did. This painting of Jumpin Jack has the home it should have.  Enjoy Shane.

Prior to the race we spoke with Brett Hearn about his 2019 season and he mentioned that it appeared he made a great choice to return to his long time home, Orange County Fair Speedway because he is now looking at a $40,000 point fund as champion at the Middletown, NY track. We snapped this photo of Nikki Ouellette in her No. 16 Sportsman mount.  Nikki is racing with a major loss as one important member of her crew recently passed.  Nikki’s mom, Margaret, went home to the Lord on August 24.  Nikki says she knows her mom is looking down and cheering her on.