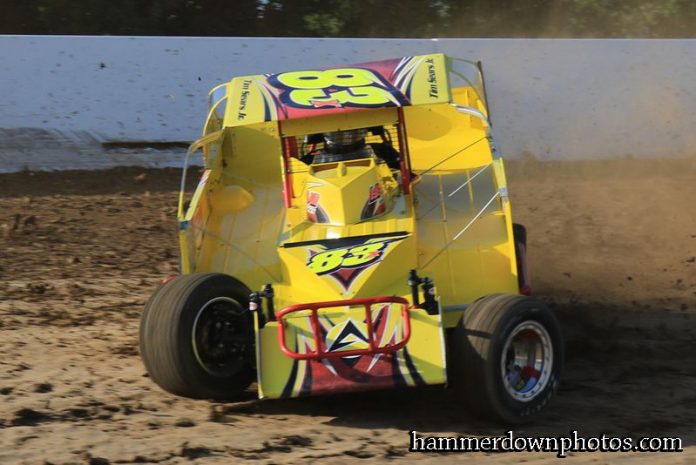 Tim Sears entered the final points weekend of the year with the opportunity to capture not one, but two Central New York Modified track titles and then he headed to Weedsport on Labor Day to try to earn a solid finish in the annual Super DIRTcar Series event.

The end results from all three ventures certainly weren’t what he had hoped for and the race team, headed by his dad Tim Sears, deserved much much better than they got.

Such is the nature of the sport.

On Sunday night he unloaded the 83x and came out for second quick in his group behind Billy Decker. The heat resulted in a runner-up finish, so off to the draw he went. The weekend luck continued as he started 12th on the grid.

By the 50th lap he was fourth and running toward the top trio of Matt Sheppard, Danny Johnson and Larry Wight, but on lap 66 a left front flat sent him to the pits.

The Sears race team had salvaged a top 10.

However, at Brewerton on Friday and at Fulton on Saturday he was in pursuit of track crowns. Both were different scenarios.

At Brewerton he went into the big-block feature with a narrow point lead over Larry Wight, Billy Decker and Tom Sears while in the small-block at Fulton he was second to Larry Wight and the only way he could win the title was to win the race.

On Friday in the very early going he was forced to drop out and Wight went on for the track title.

The next night at Fulton he started 17th and with Wight at the SDS show at Lebanon Valley it was an all or none situation for the 83x.

He had to win to get the track title.

Tim said, “I started deep in the field and I was moving well. I got up to seventh quickly, but then got behind a slower car and it took me too long to pass him. I don’t know who it was as I was just trying to pass every car in front of me. We were fast.  We were close at the end. I just couldn’t pass him. I needed more laps.”

Sears lost the race by just a little over three-tenth’s of a second to Ronnie Davis and was just one point shy of the track title.

Standing in the pits at Weedsport on Sunday, reflecting back on the weekend, Tim said, “How can you not be disappointed with all the time and money we put into this. It is heartbreaking to put in all that time and not get the results you thought you could get.”

He continued to smile and said, “Racing has its ups and downs. I can’t hang my head as we’ve been fast and had a great season.”

Sears and his team have a limited number of shows left this year with the Brewerton Super DIRTcar Show, The Outlaw weekend at Fulton and of course Super Dirt Week.

Maybe he will eventually get something that he deserves during the closing weeks of the 2019 season.