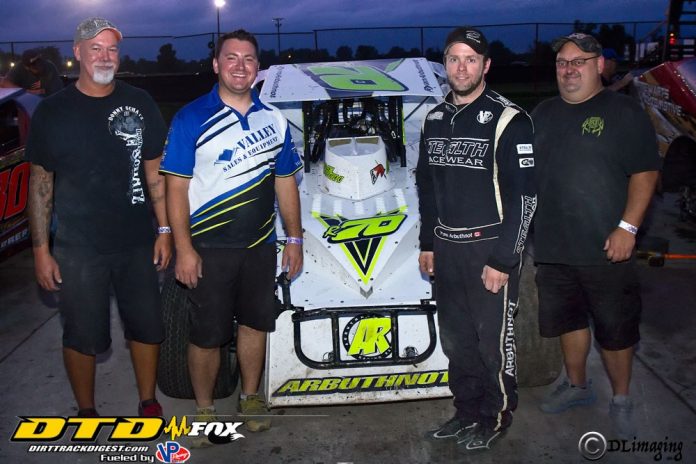 The 33-year-old had a banner year this season, capturing 11 Feature wins alone, with 31 top-five finishes, the 2019 Can-Am Speedway championship and now the Brockville Speedway title.

Ryan, a third-generation racer, grew up around the sport as his father, Steve Arbuthnot, raced for several years at Edelweiss, Cornwall Speedway, and Allumette Island Speedway.

Ryan’s grandfather Ron was a car builder/owner in which the legendary Dave Heaslip drove for him along with Denzil Billings Sr. in the later years.

Ryan’s grandfather on his mother’s side, Norm Ilan, was an engine builder who supplied all the engines for the family racing enterprise.

For Ryan, the migration towards racing was a natural one given all the racing background in the family.

Once he graduated from university with a degree in mechanical engineering, Ryan set his eyes on the racing world, cutting his teeth in 2010 at the Brockville Speedway’s Fall Nationals, racing in the vintage class.

The following year he raced the full season alongside his dad in the vintage class.

In 2012 Ryan moved up into the Sportsman class, coming home that year with three victories.

Keeping the natural progression, Ryan moved up into the 358 Modified class in 2013, but it was the 2016 year that molded the future of racing for the young Canadian. That year, Ryan and his crewman, Tyler Lambert, campaigned the Dean Billings big-block No. 33 at the Canandaigua Speedway.

“Not only was it a long road to travel each week to race, but we also had race against the likes of Matt Sheppard, Alan Johnson, Jimmy Phelps, Danny Johnson along with a handful more top big-block drivers,” explained Ryan.

From that season on, Ryan’s race stats continued to improve each year. The 2019 season was by far an outstanding year for the now well-honed driver. To come home with the 50th Anniversary year of racing championship at the Brockville Ontario Speedway was the icing on the cake as Ryan, the previous night, also walked away with the track championship at Can-Am Speedway.

For Ryan, the Brockville Speedway is where it all began back in 2010 and it is only fighting that he has now the track champion.

Ryan explained, “We had an excellent season that surpassed all of our expectations when we started in April. We hope to carry this momentum into the Fall and look to have some success at some of the bigger distance races.”

He added, “I would like to thank my crew along with all the people who have been pitched in to make this season happen! A big thanks goes to Tyler Lambert. He has been a huge part of this team for many years and puts a ton of hours and work into this program.

“I would also like to thank my family for all the support, including a very understanding wife, Krystyn. Finally a big thanks to all my sponsors who have been pitching in to help, over the years — Valley Sales and Equipment; Payload Transportation; Ottawa Valley Oxygen; Pirie Insulation; McCreas Climate Care; Finnigans Roadhouse; Engine Research; and, Bicknell Racing Products.”