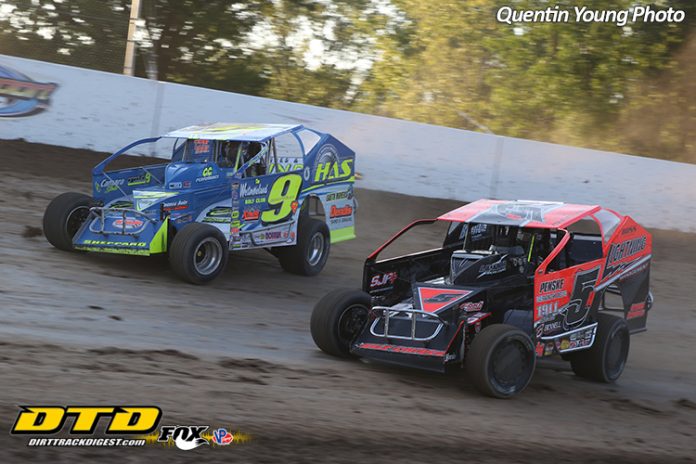 Matt Sheppard, Danny Varin and Josh Coonradt will have their names in the Weedsport Speedway history books after the triple header on the Labor Day Double.

Sheppard has three straight wins at ‘The Port’ this year with three different cars. He overcame “fast” traffic, used the top of the speedway throughout and remained consistent as always in winning his sixth Super DIRTcar Series event of the season.

Danny Varin, who had a podium finish at Brewerton on Friday in an ill-handling car, ran away with the Empire Super Sprint portion of the show.

And as always one of the best races of the night was put on by the Pro Stocks as 20 were pit-side and Josh Coonrandt edged out Pete Stefanski by eight-tenth’s of a second while Nick Stone was just a second back.

Despite rain earlier in the day, the track crew had things pretty much in order and the 6:15 p.m. starting time was just minutes behind schedule.

There were 41 Mods, 24 Sprints and 20 Pro Stocks in the pits which allowed for an efficient show that was run in an orderly and efficient manner.

SDS point runner-up Erick Rudolph was off in time trials and was fifth in his group. He finished in fifth place in his heat race to gain a qualifying spot, but was well out of the draw. His crew swarmed the engine compartment and spent a long time trying to get him ready for the main event. Erick said, “We had fuel problems and discovered the fuel pump was bad.”

Larry Wight got off in an inauspicious start. On the first lap of the hot lap session the motor shut down. He coasted in and while the motor was being checked the back up car which was “new at Lebanon Valley” was unloaded. It was organized chaos as tires where changed, gears changed and shocks removed from one car and put on the other. Wight had to get out for the time trial and made it. He started fifth and finished third to make the draw. Later Larry said, “Stuff like that happens you just have to roll with it.”

After the 91 of Billy Decker hit the wall at Lebanon Valley on Saturday night there was a need for a new chassis. So when Larry’s car went down there wasn’t a back up for either one of them if the need arose. The only other extra car in the pits might have been Pat Ward’s small-block.

Fast timer was Demetrios Drellos with a 15.516. He finished the night with a respectable seventh in the main.

Group three for the Mods was simply a major league group with Peter Britten, Billy Dunn, Justin Haers, Larry Wight, Mike Mahaney, Pat Ward and Jimmy Phelps and toss in Gary Tomkins and Dave Marcuccilli. You really had to feel for the other guy in the group, Ben Bushaw, who probably wishes he had a different draw. Going to the consi were Haers, Marcuccilli, Phelps, Dunn and Bushaw.

Marcuccilli had a heartbreaking run in the heat as he went from fourth to sixth on the final lap. He salvaged the night with a fourth in the consi.

Tyler Trump has been running his 358 everywhere this season, but on Friday night had a Donath MotorWorx big-block in the 9x. He brought it to Weedsport and qualified fourth in his heat. However, problems arose and the team went in search of a problem. Crew members noted that there was extremely low fuel pressure and they put on a new fuel pump, but in the end they couldn’t solve the issues. Disappointed car owner Tom Trump said, “We are going to install a belt driven fuel system this week.”

The Ted Barcomb 11 run by Robbie Bellinger pitted early to put more stagger in it. He came back and was quick. However, just before the three-quarter mark the yoke in the tranny broke taking away what could have possibly been a top 10 run.

Chris Hile came home sixth in another steady performance. In his heat he passed and finished ahead of Matt Sheppard. Chris said, “It sure was nice to pass Matt for once.”

He drew 10 to start and fell back to 12th at the halfway point, but was up to seventh with 25 to go.

Tim Sears Jr. was quick all night as he finished second to Decker in his heat, drew 12 and mounted an attention grabbing attack which put him in fourth on the 50th lap. He was closing on the leaders, but a left front flat sent him pit-side. He rallied for an eighth place finish.

Alan Johnson was in the top 10 solidly, but dropped out with just four laps to go.

The battle between The Doctor, Wight and Decker over the last three laps was nothing short of sensational.

Sprint cars closed out Speedweek 2.0 with races at Brewerton, Fulton and Weedsport. Utica-Rome was rained out.

Danny Varin was far from happy with the way his car handled at Brewerton in a podium finish on Friday night, but he was by far the class of the field.

Jonathan Preston was pretty darn fast. In fact he escaped a potentially race ending situation to end up second. Late in the race Ryan Coniam, Larry Wight and Preston were in a heated battle. Coming down the front stretch Wight and Preston touched. The 22 skated through the grass.  Preston kept control and merged with the field between turns one and two after weaving past Jersey barriers.

Wight settled for a top five and noted, “We are still trying to figure out the new car we have.”

Scott Holcomb reportedly had a drive line problem, but DTD was unable to get any information about any injury. The ambulance followed the car to the pits.

On the last lap United Kingdom resident Ryan Harrison hit the second turn wall and Chuck Hebing’s 45 took a tumble just past the point of impact. Everyone appeared okay.

As pits were emptying after a long night the respect racers have for one another was on display.

Tyler Thompson, who has raced dirt Modifieds the past couple of years, had captured the Oswego International Classic for Supermodifieds. He was being congratulated by folks in the pits. He was talking to members of the Buzz Chew team and driver Mat Williamson was talking to me.

Tyler was walking away and Mat said, “Bill excuse me I’ll be right back.”

He chased down Tyler and shook his hand congratulating him on the win. Mat came back and said, “He just won a big race.”