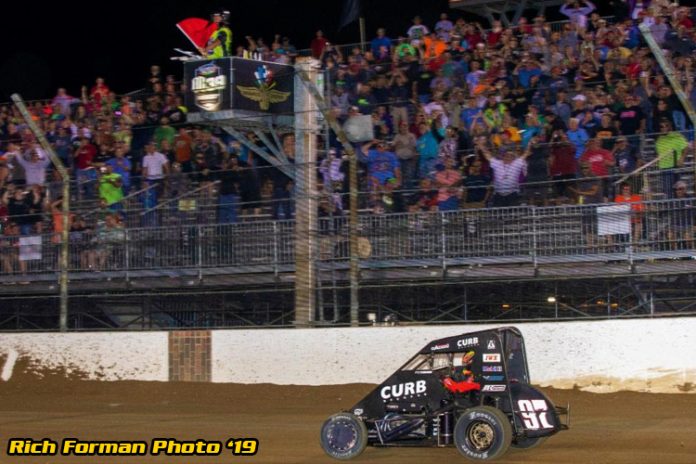 SPEEDWAY, IN – Kyle Larson literally became the last man standing on the final lap of the Stoops Pursuit during Wednesday’s opening night of the Driven2SaveLives BC39 powered by NOS Energy Drink at The Dirt Track at IMS.

On the last lap of the fifth and final segment of the 25-lap event, three drivers remained on track and were in contention for the victory after 22 of the 25 starters had been eliminated from competition in the unique format that sent drivers to the infield if they were passed or were involved in an accident.

Michael Pickens (Auckland, N.Z.), Kyle Larson (Elk Grove, Calif.) and Justin Grant (Ione, Calif.) entered the back straightaway off turn two under a proverbial blanket on the last lap. Pickens dove underneath Larson entering turn three on the final lap. As both went for the same piece of real estate at the entrance of turn three, Pickens’ right rear tire climbed Larson’s left front, sending Pickens flipping wildly and Larson into a 360 spin at the edge of the infield.

Moments later, Grant seemed to have a clear path to victory on the top side, but instead, banged his right rear tire off the turn three wall, sending himself into a series of barrel rolls against the concrete.

Remember Larson? With a cloud of dust kicked up from the infield and his camber askew, he pointed his Keith Kunz-Curb-Agajanian/Curb Records/Bullet by Spike/Speedway Toyota in the right direction, tip-toed around the bottom of the fourth turn and gassed his way back to the finish line as the winner.

The unpredictable turn of events was reminiscent of a combination of both the 1976 Daytona 500 finish between Richard Petty/David Pearson as well as Danny Sullivan’s spin-and-win on the same property at IMS back in 1985, earning Larson $2,100 for his efforts and being a part of one of the wildest moments in the century-plus history of racing on the IMS grounds.

“That was wild,” Larson exclaimed. “I didn’t know it was going to be that crazy of a race. On the second to last stage, Justin (Grant) got by and then (Jason) McDougal got by, and I knew I needed to get back to second to be able to run that last round.”

“I was really good up top,” Larson continued. “I knew if I got a good restart, I could get by Pickens. But this track was so racy that sliders were easy to throw. Michael (Pickens) was throwing everything he had at me. We made contact there on the back stretch. He was trying to park it on the bottom, and I was trying to do what I did the lap before, two laps before.”

Wednesday marked the first night Larson had been on track in competition at The Dirt Track at IMS after not competing in last year’s inaugural BC39 event.

“I was bummed I couldn’t make it last year,” Larson admitted. “I saw how exciting it was and said, ‘screw it, I’m going to try to make it.’ I made it to the Indy airport at 4:45 just in time for hot laps. It was worth it, though. I hope we can be up here again tomorrow.”

The BC39 continues Thursday, Sept. 5, with the finale. The event will have the public gates opening at 3pm and cars on track for practice at 4:30pm, with qualifying races to follow at 5:30pm. Opening ceremonies are slated for 7pm and immediately followed by the main feature events, starting with multiple D-Mains, C-Main, the semi-feature and the 39-lap main event.