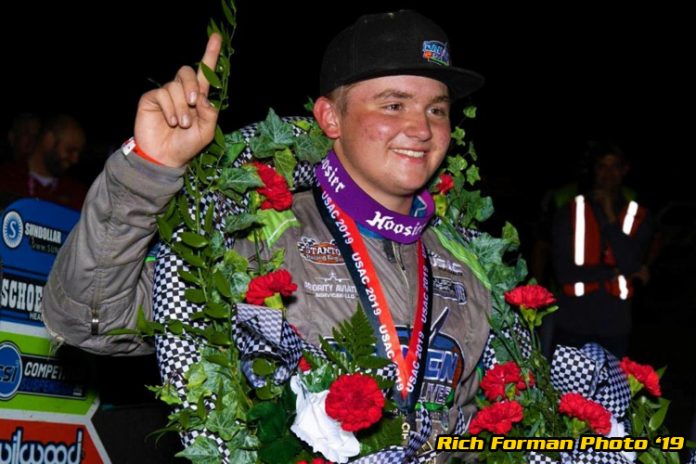 SPEEDWAY, IN – Before he had even laid eyes on The Dirt Track at IMS, the Indianapolis Motor Speedway had already occupied a special place within the heart of Zeb Wise.

He’d been triumphant in a quarter midget at the Battle at the Brickyard and also became the first ever winner on The Dirt Track at IMS in 2018, snagging the Stoops Pursuit.

After Thursday night’s victory in the Driven2SaveLives BC39 powered by NOS Energy Drink, the track became the showcase for a defining moment in the 16-year-old racer’s burgeoning career where he led the final seven laps to score the biggest victory, and the richest payday ($15,000), of his young career.

One of the main influences on The Dirt Track at IMS becoming a reality was Bryan Clauson, the namesake of the BC39. Angola, Indiana’s Wise has carried BC’s spirit onward, driving for Bryan’s father’s Clauson/Marshall Racing team and piloting the No. 39BC on the USAC NOS Energy Drink Midget National Championship trail which he put into victory lane in front of a large throng of spectators on this memorable late summer night.

Wise’s IMS story began earlier this decade when competing at The Battle at the Brickyard. It was there where Tim and Bryan Clauson, already a racing star in his own right, noticed Wise. When the time came, he was hand-picked by the Clausons to become a part of the team, leading him on the path to the biggest win of his career thus far.

“A lot of people don’t know this, but Bryan and Tim, the first time they noticed me was at the quarter midget track that they run called Little Brickyard,” Wise recalled. “That was the first time they ever got in contact with me. To carry over from the first time they saw me here, and now we’re out there winning big races, it’s very special not only to me, but probably even more special to the team.”

Wise was in a hurry to get things done from his fifth starting spot at the drop of the green for the 39-lap main event. He whittled his way to second past Kevin Thomas, Jr. after the two clipped bumper to bumper off turn four when Thomas snagged the curb. Wise set up shop, went to the bottom and slid up in front of Thomas to pocket the runner-up spot.

Pole sitter Thomas Meseraull remained in control up front, keeping Wise in check a handful of car lengths back until the 18th lap. That’s when a four-car quagmire ensued with Tucker Klaasmeyer first getting upside down, followed by Jerry Coons, Jr. plowing into Klaasmeyer and getting on his lid as well while Gio Scelzi and Cannon McIntosh also became entangled in the fray.

That’s where it nearly came to a premature end for Meseraull, who made a hard left to avoid clipping the stopped car of McIntosh. Wise, just behind Meseraull, took evasive action as well, narrowly missing misfortune.

On the ensuing restart, Wise gained a full head of steam coming downhill off the top of turn two to zip by Meseraull for the race lead as Jason McDougal and Kyle Larson came in tandem to go to second and third as Meseraull slipped to fourth. A three-car chase at the front saw Larson go topside around McDougal for second and pounce when Wise bobbled atop the fourth turn cushion.

Larson instantaneously pointed his nose to the bottom and used a major run to slide across the nose of Wise into turn one, securing the lead off turn two. Moments later, however, Michael Pickens’ car came to a stop in turn four, sending Larson back to second and returned Wise to the head of the field for the restart.

As he had done all throughout the night, Wise was a force on restarts, and was able to stretch it out to a half-straight lead by the back stretch on the lap 21 resumption. Nonetheless, Larson leashed Wise back in in no time and was clamped down on the shadow of Wise with less than 15 laps remaining.

On lap 28, Wise biked in turn three atop the cushion, which was basically be an extension of the outside concrete wall at that point. It was seemingly no harm, no foul, as Larson got on the binders to avoid contact with Wise. Both kept their foot in it and put their wills on the razor’s edge in turn one as Larson attempted to slide Wise in turn one. With just enough room to fit the width of a midget and the thickness of two dimes between them, Wise never wavered from the top, kept his right foot on the hammer and escaped through the other side of the needle to hang onto the spot just before early race leader Meseraull flipped in turns three and four, concluding a promising run for the high-point man who led a race-high 18 laps.

On the following restart, all broke loose again, with Larson taking his run at Wise with a slider into turn three. By the time the two arrived at the exit of turn four, nowhere was there room to spare. Larson and Wise made contact, sending Wise ramping up the wall and landing on all fours while defending BC39 winner Brady Bacon snuck by on the bottom from fourth to first past McDougal, Larson and Wise to rip the lead away on lap 29.

Larson then slowed with a flat left rear tire to force a yellow flag, putting Wednesday’s Stoops Pursuit winner/survivor out of contention for the win, although he did race back to a ninth-place finish. Meanwhile, Wise’s mind was racing with concern over whether his race was in jeopardy, admitting he thought his race was over after the contact.

Following a lap 31 red flag for a McIntosh flip between turns three and four, Wise’s curiosity grew stronger as he pondered what could be wrong at the moment with his Clauson-Marshall Racing/Driven2SaveLives – Sundollar Restoration/Spike/Stanton SR-11x.

“I knew something was wrong,” Wise admitted. “Heck, I couldn’t even hold it straight down the straightaways. I knew something was going on. We had a red flag there and the push truck driver came to me and I said, ‘Dude, what is wrong with the front end?’ He looked it over and said, ‘Looks like you have a bent steering arm.’ At that point, I knew it wasn’t something serious, and that I didn’t need to pull off the track because it was going to be a hazard or anything.”

Experiencing a handful with his steering wheel in addition to the flurry of action surrounding him, Wise overcame and persevered, utilizing a lap 33 slide job to overtake Bacon for the lead and bring CMR teammate Chris Windom along with him on the bottom, who cranked down the shocks and lay in wait to capitalize on any mistake by Wise down the stretch.

In a race that changed its complexion frequently and without hesitation, FMR Racing teammates Bacon and McDougal had drifted back to fifth and sixth where they tangled on the front straightaway on lap 35, ending the team’s bid for a repeat BC39 victory.

Racing resumed with Wise and Windom continuing their side-by-side joust as Christopher Bell entered the ring and was challenging both for the lead as he followed Wise on the high side of three where he bounced and buoyed his way atop turn three with three laps to go, bouncing the left side of his roll cage off the track surface before springing back up and landing on all fours, putting a premature end to his bid for a win with front end damage.

Wise used another strong restart to gain separation on the lap 37 restart ahead of CMR teammates Windom and Courtney (who started 20th). Windom on the low line and Courtney up top dug in during their proverbial fist fight for the runner-up spot. Windom began a slow fade as the bottom began to slicken and Courtney found the traction up top to pull ahead coming to the white flag.

Wise put an end to the dramatics, stamping his name in Indianapolis Motor Speedway lore on the final lap as he nailed the entry and exit to each end of the racetrack on the 39th circuit to win by 0.372 sec. over Courtney, Windom, Chad Boat and Logan Seavey.

After a beginning to the season that saw mixed results, Wise has won three of the last five in USAC NOS Energy Drink National Midget competition, but none bigger than the one he earned Thursday night at IMS.

“We’ve been on such a hot streak lately,” Wise said. “It doesn’t matter where we go, you know we’re a factor. When we came off that hot streak in Pennsylvania, I knew this was going to be the one that would really show what we’ve got, and we got it done.”