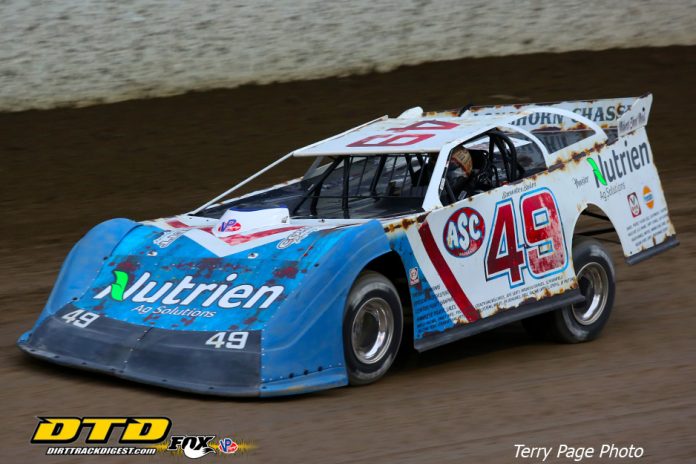 ROSSBURG, OH – While the age gap might have been a big highlight of Thursday night’s World 100 preliminary Feature winners, veteran experience was certainly the theme of Friday night’s twin-25 main events. 2016 Dirt Late Model Dream victor Dennis Erb Jr. and two-time World 100 champion Jonathan Davenport each found their way back to Eldora Speedway’s Victory Lane in convincing fashion, showing exactly how valuable the number of laps they’ve each had around “The Big E” can be against a full field of the best Dirt Late Model drivers in the world.

Thursday night’s Group B Feature winner, Hudson O’Neal, jumped to the early lead in the opening two laps before the race’s first caution was displayed just a few corners later. On the restart, Ada, Ohio’s Jonathan Henry lit a fire under his Heckenast Racing #33 and shot out of a cannon to the lead with a slidejob underneath O’Neal coming out of turn four. Henry kept the lead all the way through lap 11, until making a costly mistake going into turn three on lap 12.

Henry was reeling in the lapped car of Kody Evans down the backstretch when he decided to take it to the bottom to get around Evans’ #4G. Unfortunately for Henry, Evans decided the bottom lane was the place to be as well. The two made contact on the low side of turn three, sending them both into the outside wall. O’Neal, trailing not far behind the leader with limited time to react, steered his #71 Longhorn Chassis hard to the left to try and avoid the wreck, but got a piece of Evans’ sideways-sitting ride in turn three. The incident left three cars with significant damage – Evans and Henry took it pitside and did not return while O’Neal nursed it across the finish line as the final car on the lead lap in 20th position.

This opened the door for Erb, who used his know-how of Eldora Speedway to drive it back home to the promise land, leading each circuit from there on out to collect his first crown jewel event preliminary Feature win since the 2016 Dream finale.


Two restart attempts after the Henry-Evans incident saw Erb lined up on the top side of Michael Norris, where he powered around the outside of “The Crusher Kid” to swipe the lead away permanently.

“I knew starting on the outside meant I had to have a good start. I was able to get a good run getting into turn one and carried some speed through there. It made the difference in getting that pass,” Erb said.

The current World 100 format includes an invert for the qualifying Heat races on each night, and Erb’s 24th-best time trial lap put him right on the pole of Group A’s final Heat race. He held that spot through the checkered flag, placing him on the pole for the Feature. Veterans of the sport like himself know just how important it is in marquee events like the World 100 to start up front as often as possible, and it paid off quite well for him on Friday night.

“These cars are just so equal, so be able to get up there and not have to battle with people going up to the front, it makes a big difference,” Erb said.

One honorable mention goes out to Chris Madden, who just recently got back behind the wheel of his Scott Bloomquist Racing ride this weekend after recovering from an eye injury sustained a few weeks ago in Mansfield, Ohio. Coming from his 14th-place starting spot, “Smokey” broke into the podium by lap 12 and held position inside the top-five for the rest of the race, getting around Shannon Buckingham for the runner-up spot with just two laps remaining to claim a second-place finish.

He’s won this race two times before. He also won a prelim Feature in the Dream earlier this year. On Friday night, Jonathan Davenport was simply not going to be denied of his semi-annual trip back to Eldora Victory Lane.

Coming from his fifth-place starting spot, “Superman,” much like Erb did in the Feature prior, remembered a tiny bit of patience en route to the lead. Four-time World 100 winner Scott Bloomquist lay ahead of him as the field approached half-way, and soon, it was time to make the move for the runner-up spot.

“I got to third on the start and was just kind of rolling around on the bottom, seeing how the race was going to play out,” Davenport said. “I was pretty good through the middle, and then I was catching Scott and got in his air wake and got really loose, so I had to move around some.”

Donning a sharp Brewster Baker-themed throwback graphics scheme as a tribute to the 1982 film “Six Pack” for the weekend, Davenport threw a big slidejob on Bloomquist in turns three and four and began his charge for the rear bumper of then-leader Josh Rice.

It only took two more circuits around the half-mile for Davenport to catch and pass Rice, diving deep into turn one on the bottom as Rice followed the path of a lapped car up high.

“Those lapped cars were slowing him up and I was maneuverable enough to where I could roll right around him on the bottom,” Davenport said. “We ran a couple of laps in lapped traffic, and I was lucky the caution came out with me in the lead.”

From that point on, it was all “JD.” Not even a late-race challenge from “Killer” Kyle Bronson on a restart with six laps remaining could slow the Blairsville, Georgia-native’s efforts to get to the stripe first.

As another veteran of Eldora’s crown jewel events, Davenport has the know-how to pace himself in the longer distance races and intensify it for the shorter ones. He said he doesn’t treat them any differently, but starting up front always helps.

“It all depends on where you start,” Davenport said. “We all know how critical clean air is here, so you try and put yourself in the best situation possible there. If you’re starting in the back, you just go where they’re not.”

The Nutrien Ag Solutions #49 has shown his prowess at Eldora several times already this season, more specifically in the 25th Dirt Late Model Dream back in June. Davenport said he felt that was his race to lose, and he ended up doing just that. Contact with Kyle Strickler early on in the race bent up his front-end, dashing his chances for $125,000 and his second event title. But now, it’s time for redemption.

“I think I was the best car here at the Dream. I had it in the back of my mind that I was going to win that race, and I just messed up… so I’ve had a little chip on my shoulder all year since then,” Davenport said with a chuckle.

The final night of World 100 action from Eldora Speedway continues on Saturday night, Sept. 7 with the 100-lap, $52,000-to-win finale capping off a night of qualifying events to decide this year’s field. Hot Laps go live on DirtonDirt.com and Eldora.tv at 7 p.m. ET!