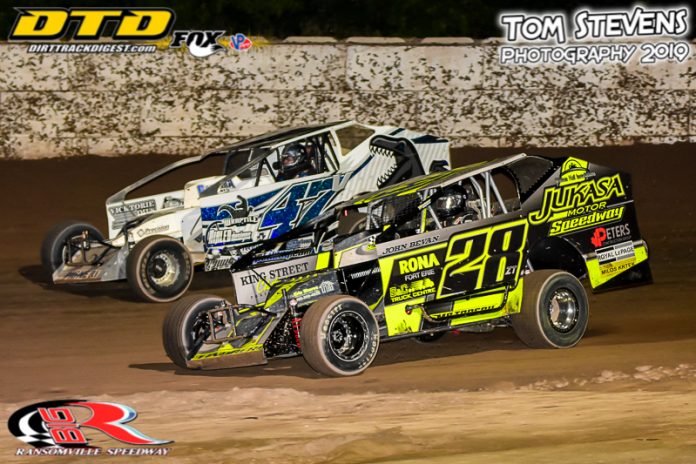 The DIRTcar Sportsman Series Western Region started its 2019 season schedule at Ransomville as part of its traditional post-Labor Day swing through the Niagara Region. A total of 27 Sportsman were on hand for the 50-lap feature.

Scott Kerwin and Chad Chevalier had the luck of the draw to start on the front row for the main event. Kerwin, driving Bubby Pawlak’s Hy-Tech Concrete #1 Sportsman, grabbed the lead on the start followed by Andrew Smith, who moved up from the fourth starting spot, followed by Chevalier, Jonathan Reid and Derek Wagner.

The first 22 laps of the race ran off without a caution flag, which led Kerwin to drive head first into lapped traffic just past lap 10 followed by Smith and Chevalier.

Reid spun out while riding in the fifth position to bring out the caution for the first time. David Fingerlow collided with Reid after he spun to add insult to injury. The race restarted with Wagner quickly taking third place from Chevalier. He and Smith then traded the runner-up position back and forth.

The caution came out for a second time on lap 31 when Noah Walker and Robbie Johnston collided in turn four. Wagner was once again quick on the restart as he reclaimed second from Smith. Smith lost several positions shortly after that when he hopped the caution in turn three.

Kerwin continued to hold a slight advantage over Wagner and Chevalier as the race moved into its final stages. He had to survive two final restarts in the final five laps to secure the victory. Kerwin helped his chances by choosing the outside line for those final restarts, which forced Wagner to line up on the inside line.

Once the green flag appeared for the final time, Kerwin drove off to collect his second checkered flag of the season at Ransomville as he won the only two races he started this season. The car Kerwin drove won seven races in 2019 with five wins for Pawlak and two for Kerwin.

Wagner settled for a runner-up finish. Brad Rouse got by Chevalier on the final restart to round the podium. Fellow Canadians Chevalier and Greg Panunte rounded out the top five. Garrison Krentz, Cody MacPherson, Justin Sharp, Dylan Davidson and Cody Wolfe completed the top ten finishers.

The 358 Modified Tour from Pennsylvania made its first visit to Ransomville on Friday as well with 25 cars on hand. The field was a good mix of Ransomville regulars and series drivers from outside the area.

Ryan Susice and Cody Smoker lined up on the front row for the 30 lap feature. Susice took off at the drop of the green flag. Phil Vigneri III started third and moved up one position on the opening lap to run second.

Susice quickly caught lapped traffic by lap 10 of the race, but he caught a break two laps later when the yellow flag was displayed after Allan Wills stopped on the track. The race restarted with Susice venturing off into clean air followed by Vigneri, Gary Lindberg, Greg Martin and Shannon Whaley.

It looked like Susice was on his way to victory until he slowed on the track on lap 19 with a flat right rear tire. This handed the lead to Vigneri who had been having a good run in second until this point.

Vigneri and Lindberg got a little physical when the race restarted, but Vigneri fended off the challenge from the Canadian driver. He continued to pull away from Lindberg on subsequent restarts as there were three more caution periods inside the final 10 laps of the race.

The yellow flag flew for the final time on the final lap when Andy Jankowiak stopped on the track. This set up a green-white-checkered finish. Vigneri drove away from Lindberg one last time to secure his first ever Modified win at Ransomville.

Vigneri and Lindberg were followed across the finish line by Chad Brachmann, Todd Gordon and Greg Martin.

The Ki-Po Chevrolet Street Stocks ran their next-to-last points race of the season. Pete Stefanski scored his division-best fifth feature win of the season to close the gap on points leader Cory Sawyer. Stefanski passed Pat Dell for the lead following a lap 7 restart, and then drove away from the field.

While Stefanski pulled away the rest of the top five spots were up for grabs between Dell, Sawyer, Jaren Israel, Billy Bleich, and Anthony Guthrie. The action bubbled over on a couple occasions as Israel and Bleich made contact on lap 16, and Guthrie and Chris Dziomba tangled with two laps to go.

Stefanski took off for the laps to score the win. Sawyer made a late run into the second position to minimize the amount of points Stefanski gained on him. Sawyer and Stefanski are separated by 24 points heading into the championship race next Friday.

Cole Susice passed Mike Kramarz for the lead with two laps to go to earn his third win of the season in the Gippster’s Collision Mini Stocks. Kramarz started on the outside pole and led the first 13 laps with Susice right behind him. Susice got a run on Kramarz just as the pair got the two laps to go sign from the starter, and he cleared him for good on turn one.

The win allowed Susice to extend his points lead over Kramarz for the track championship to 22 points. Matt Hornquist finished third after chasing down Susice and Kramarz in the closing laps. Steve Matson and Chris Leone rounded out the top five.

Ransomville Speedway closes out the 2019 season next week with the annual King of the Hill Weekend on September 13-14. Friday night’s action features the BEI Lightning Sportsman Series and RUSH Wingless Sprints. The BRP Modified Tour visits Ransomville for the first time on Saturday plus the Street Stocks run their 75-lap King of the Hill feature.