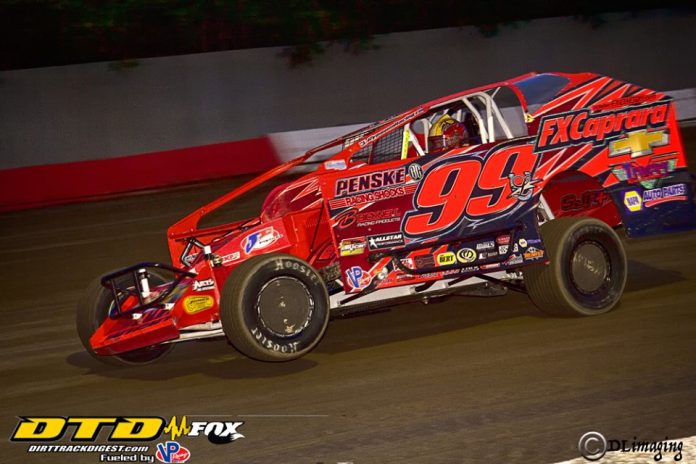 GRANBY, QUE – In what will go down as one of the greatest races in Super DIRTcar Series history, Lightning Larry Wight faced down defending Series Champion and points leader Matt Sheppard as well as his own Gypsum Racing teammate Billy Decker to claim $7,500 and Autodrome Granby glory. The trio of top Series drivers raced wheel-to-wheel for 100 laps, battling for the lead almost non-stop. In the end, Wight won on the topside while Sheppard took the bottom and due to a flat left front tire lost second to Mat Williamson in his fast family-owned No. 6.

Larry Wight visited Victory Lane in Series competition for the first time since his win at Plattsburgh Airborne Speedway and did it in style. Wight started on the outside pole and battled with Ryan Godown, Billy Decker, and in the end Matt Sheppard to secure his $7,500 win.

The No. 99L was fast off the trailer, “We had a really good car all night,” said Wight. “I thought maybe about halfway through the race we hadn’t tightened up enough or the track was going away faster than we thought. But the right rear Hoosier finally started working a little bit. It paid off to ride around on the bottom for the first half of the race and try and save that thing a little bit.”

Speaking of tires, rival Matt Sheppard finished the final fifteen to twenty laps with a flat left front tire. Despite the flat, Sheppard still put up a titanic fight for the lead.

“Matt [Sheppard] could have four tires or three tires, he’s still the car to beat. It doesn’t matter. We caught a break there. He clipped the wall and I clipped the wall around lap 20 but mine stayed up thankfully. It was a great race. Our car was free enough to run that top and keep it straight so we were able to get by him,” Wight noted.


Crossing the line in second place was St. Catherines, Ontario native Mat Williamson in his black and red No. 6 Big Block Modified. Williamson prowled around the top of the field but took care of his race car in order to be there at the end.

“Hats off to Larry [Wight]. He ran a great race,” Williamson congratulated. “I don’t know if we were a second-place car. Matt [Sheppard] got a flat and we were able to get by him. But we were trying to save our stuff for the end. I was wicked tight and throwing the car getting into the corner. I’m surprised we have as much tire left as we do.

Williamson fearlessly drove the No. 6 to the top where only Wight, Decker, and a few others would dare put their cars on the monstrous five-eighths of a mile speedway. That would prove to be the difference for Williamson as he used the top line to get around the three-wheeling-but-fast Matt Sheppard for second.

Thanks to the heroic efforts of Matt Sheppard behind the wheel of the No. 9S, the MSM machine came home on the podium. In the final frame of the race, Sheppard and Wight were racing side-by-side, lap after lap.

But he didn’t need it.

“I think we had the best car here tonight. We just didn’t have the best driver,” said Sheppard. “I clipped the wall a little bit in turns three and four and it was enough to flatten it. At one point I actually got the lead back with it flat and I just couldn’t hold on long enough. Every time we put a run on Larry [Wight] I thought we might get him but the car would do something kind of funky on me getting into the corner. I just didn’t know what it was going to do anymore. I’m thankful it happened as close to the end as it did and I’m thankful we could hold on for third.”

While the finish was impressive by all who witnessed it, Sheppard couldn’t hide his disappointment after leading so much of the middle part of the race.

“The bottom got really, really low and if you weren’t just about scraping your left front on the wall, you weren’t going very fast. We were pretty fast for most of the race. We turned the corners 160 times and all it took was one to end our night.”

Peter Britten from Queensland, Australia, was another fast car off the trailer. He did well in Hot Laps, Time Trials, and won his Heat Race. Unfortunately, that’s when his good luck ended. In the Top 12 redraw out in front of the massive Granby grandstand, Britten picked the twelfth starting position. Although he had to start twelfth, Britten received a free tire certificate from Hoosier Racing Tire.

Britten was very fast in the opening stages and had moved up six spots to sixth when something broke on the No. 21A and his night was done.

Next up on Saturday, September 7, the Series travels an hour north of Granby to the bullring of Le RPM Speedway.