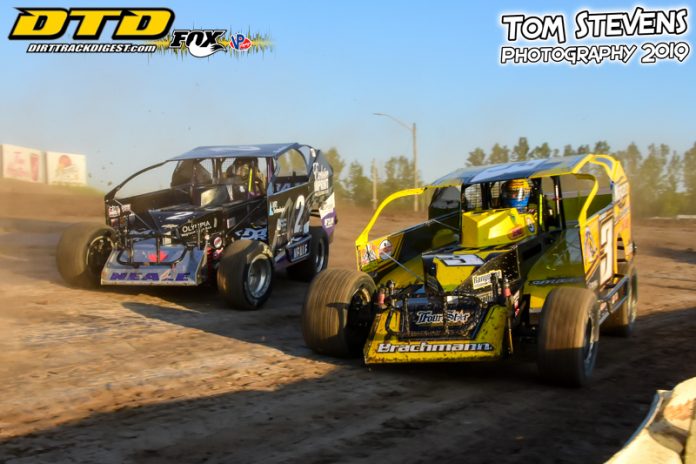 DELEVAN, NY – With Friday’s remainder of the first day of Fall Classic weekend run Saturday afternoon due to an area power outage the night before, racers and fans had a sort of ‘day/night doubleheader’ at Freedom Motorsports Park, as the evening show featured a return of the Zimmers  Serivce Center United Late Model Series (ULMS) for the running of the Mike ‘Duke’ Duclon Memorial.  The Big Block/Small Block Modifieds had an Outlaw 200 Qualifier event, and the Street Stocks, Pure Stocks, Mini Stocks, and Bandits were also a part of the evening card, presented by Upstate Auto Group, Murphy Logging, and Previty Auto Wrecking.

The Zimmers Service Center ULMS ‘Duke’ Duclon Memorial started with Chub Frank grabbing the lead from Mike Maresca.  Max Blair took second from Maresca on a lap 2 restart, then ran down Frank and passed him at the one third mark of the 30-lap distance to take the lead.  Blair pulled away from Frank as Maresca fell into a battle with Boom Briggs and Greg Oakes.  Blair was able to keep his advantage through lapped traffic over the final laps to take the win, his third Duclon Memorial title.  Frank, Maresca, Briggs, and Oakes rounded out the top five.

Brachman ran the outside while Maresca took the bottom as they battled for the top spot.  On lap 24, Maresca’s car started to slip off the bottom, allowing Brachman the chance to dive under him and take the lead.  Brachman would pull away to take the win and the guaranteed starting spot for the Outlaw 200, with Maresca second and Alan Johnson third.  Gary Lindberg and Rich Rickner rounded out the top five.

The MHL Performance Stree Stock feature saw Bill Taylor and Tom Kemp battle for the lead, with Taylor grabbing the advantage.   Dennis Cummings started to challenge Kemp for second as Taylor pulled away at the front of the field.  Cummings took second from Kemp and put pressure on the leader in the second half of the feature, finally taking the lead on lap 23 and getting the win.  Bill Taylor was second, followed by Kemp, Levi Watson, and Randy Taylor.

MHL Performance Street Stock heats were won by Bill Taylor and Dennis Cummings.
In the Pure Stock division, MIke Parmenter, winner of the Friday portion of the weekend, battled hard with Josh Wilcox for the race lead, but the red flew after a three car crash between Addison Scott, Lee Bailey II, and Larry Mitchell.  On the restart, Josh Wilcox was able to run down leader Parmenter to take the lead and the victory, followed at the line by Parmenter, Victor Earl, Daniel Giboo, and Andy Michael.

The Pure Stock heat was won by Josh WIlcox.

The Mini Stocks were going for a $400 to win payday courtesy of the Mancuso Brothers, Mancuso Limo, and Caesar’s Auto.  Dante Mancuso took the lead but broke while leading on lap 6, handing the lead to Don Newton Jr.  A lap 14 caution bunched the field back together for a restart with one lap to go, Newton held off Andrew Gayton to take the win, followed by William Weller Jr, Brad Whiteside, and Travis Babcock.

Mini Stock heats were won by Mike Brown, Don Newton Jr, and Dante Mancuso.
In the Bandit division feature,  Chance Palmer got past Raven Burkett on lap 2 and pulled away to take the win, followed by Cody Atwater and Burkett, who dropped out around the halfway point.  Chance Palmer won the Bandit heat.

The final on-track event at Freedom Motorsports Park in 2019 will be the final Enduro of the season, scheduled for Sunday, September 29th at 1:00 p.m.  For more information, visit www.freedommotorsportspark.com.