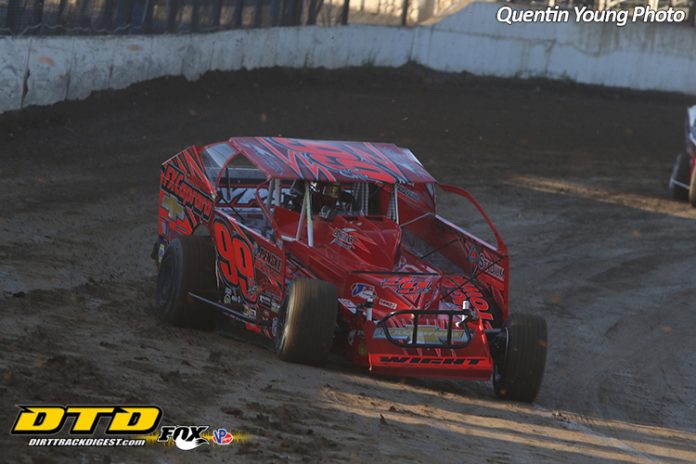 BREWERTON, NY – On Friday the Thirteenth in September, race fans are in for a devilishly good time at Brewerton Speedway when the warriors of the Super DIRTcar Series unsheathe their swords for the Duel at the Demon 100. The high-banked, premier Central New York dirt oval hosts the best of the best in Big Block Modified racing in a $7,500-to-win, $500-to-start, 100-lap Feature.

With the season winding up to the endgame, Series drivers are keen to pick up every point they can. A number of full-time Series drivers race in the Hoosier Racing Tire Weekly Championship at Brewerton Speedway.

The blood-red Gypsum Racing team will be dueling with the demon in full-force. Larry Wight, Pat Ward and Billy Decker have all picked up wins at Brewerton in weekly competition. With the speed they showed last weekend at Granby, they could be the team to beat on their home turf.

HBR’s Baldwinsville Bandit Jimmy Phelps also has a win this year at Brewerton. Phelps is finished fifth in Brewerton points and rides sixth in Series points. Phelps and his capable team know they need to take advantage of their home track to move up in the points.

The top three in Series points are in a tight battle. Matt Sheppard is the current leader with Mat Williamson and Erick Rudolph hot on his tail. Sheppard and Rudolph have traded wins all season long while Mat Williamson has been Mr. Consistent.

This year’s crop of rookies is the best in a long time. Ryan Godown leads the way but Demetrios Drellos and Jack Lehner are making names for themselves on the tour, picking up fans at every stop.

Mike Mahaney needs a strong finish going into the season’s homestretch. He’s running eleventh in points but that does not reflect the strong runs the Huttig machine has had. Unfortunately, motor problems have hindered them in the second half of the year.

The Sears family came in second and fourth in Brewerton’s points. Tim Sears and Tim Sears Jr. will surely be a powerful duo for Series regulars to contend with. Sears Jr. looked very strong at the last Series race held at Weedsport Speedway.

Other Brewerton regulars will give Series drivers a run for their money like The Hile-driver Chris Hile, Chad Phelps, Ronnie David III, Tyler Trump, Andrew Ferguson, and more.

If you can’t make it to the race track there are a few great ways to follow along with the action. Second to being there, FloRacing provides live HD streaming of the race. Also follow us on social media on Twitter, Facebook, and Instagram.