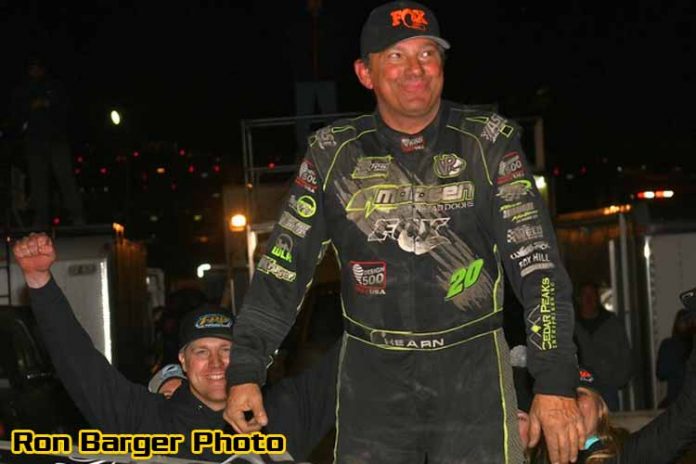 FONDA, NY – Some of the sport’s most iconic names have put their name in the record books since the very first Fonda 200 was contested as a NASCAR Grand National event in 1955.

Only one driver has won it four times: Brett Hearn.

‘The Corporate Jet’ hopes to add a fifth ‘200’ victory to his resume at Fonda Speedway in 2019. The Fonda 200 returns to the Track of Champions Thursday-Saturday Sept. 26-28 with the largest purse structure ever offered at the half-mile track located just off New York State Thruway Exit 28.

The most recent 200 took place 17 years ago in 2002. That marked Hearn’s fourth triumph in the prestigious event.

The Madsen Motorsports No. 20 operation has filed its entry for the revival of the 200 at the end of September.

Rules and Race Procedures for the 200 have been posted at the following link: http://www.thefondaspeedway.com/wp-content/uploads/2019/08/Fonda200RulesandProcedures.pdf

The Registration Form for Modifieds can be found here. Teams can save $50 on registration if entered by Sept. 7: http://www.thefondaspeedway.com/wp-content/uploads/2019/08/Fonda200ModifiedEntryForm.pdf

Complete Fonda 200 payout information is on the following link: http://www.thefondaspeedway.com/wp-content/uploads/2019/08/Fonda200Payout.pdf

Thursday (Sept. 26) is reserved for camper and trailer parking in addition to open practice for those seeking lap time on the famed Track of Champions layout.

Friday (Sept. 27) will include 15-lap qualifying races for the Sunoco Modifieds, the Patriot Sprint Tour with a full program plus a make-up feature event postponed by rain on May 25, Pro Stocks competing for $1,000 to win, Trackside Body Works Street Stocks in a $500-to-win event and Four Cylinder Cruisers.

Reserved grandstand tickets are available now and can be obtained by calling the speedway office at 518.915.4395 and leaving a message for Angela Hanson. Office hours for walk-up sales are posted on the speedway Facebook page as well.

A Fonda 200 information page can be found on the speedway website: http://www.thefondaspeedway.com/fonda-200/

The event will be broadcast on www.dirttrackdigest.tv for those that can’t make it to the speedway.  It is an DTD Tv Xtra event featuring multiple camera angles and live scoring.

Since 1953, the ‘Track of Champions’ Fonda Speedway has hosted the best in stock car racing. Now under the management of BD Motorsports Media LLC, the speedway will operate weekly on Saturday nights from April through August plus several special events.