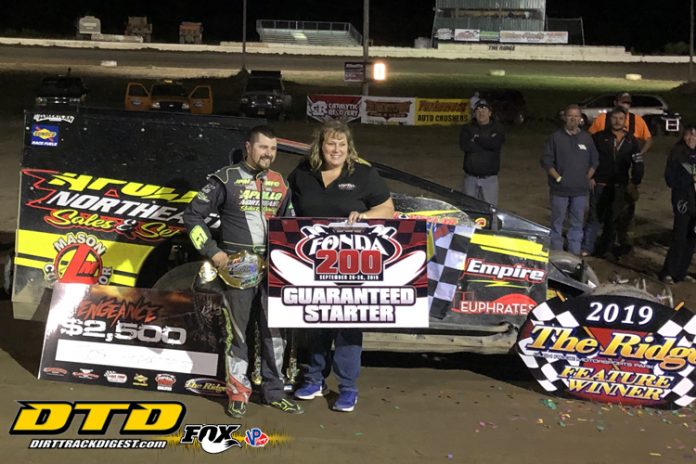 Within a few weeks the local racing scene will come to a close.  Both Albany Saratoga and Fonda are looking at some huge events to close out the season.  Albany Saratoga will hold a three-day event starting with the multi-time rain delayed season opener from April which will be run on Thursday, September 19, followed by two big shows on Friday, September 20 and Saturday, September 21.

Fonda has two events coming up, the first this Saturday, September 14 with Modifieds, 602 Sportsman, King of Dirt Series event, Pro Stocks, Street Stocks, Four Cylinders and CRSA Sprints.  Also on the card is the very popular MVVDM (Mohawk Valley Vintage Dirt Modifieds).  Then Fonda’s historic comeback season will end with the return of the Fonda 200 Weekend Racing Festival with a payday of $53,000 for the winner of the Fonda 200 on Saturday.  Starting Thursday, September 26 with open practice and camper and trailer parking, gates open at 2 p.m. Free grandstand admission.  Friday, September 27, the Patriot Sprint Tour comes to the track along with the Modified qualifying races, Pro Stocks, $1000 to win, Street Stocks, $500 to win and Four Cylinder Cruisers.  Racing starts at 7 p.m.  Saturday, September 28, includes the last chance races for Modifieds plus Crate 602 Sportsman paying $1500 to win and culminates with the Fonda 200 paying $53,000 to the winner and a total pay structure of $125,675 for the Sunoco Modifieds. Walking the pit areas at local tracks we have learned that you never know who you may run across.  On Friday night at Albany Saratoga we spotted a familiar face from the past, Jim Burton.  The past few years we have watched his son, Aaron take on the driving duties for the family but on Friday his dad Jim was wearing a driver’s suit.  We spoke with him about a few things, one being what he was doing there.  Jim explained, “I haven’t raced for some 13 years, but when asked by Ivan Joslin to fill in while he recovered from leg surgery, I said yes.”  Jim may have picked the hardest night to return to racing, a 50-lap Pro Stock feature paying $5000 to win.  It wasn’t the best night for Jim but he has a few more opportunities to get back into the groove.  We wish him well and Ivan a speedy recovery. On the way into the track on Friday we saw and huge American flag flying high atop the aerial ladder of the Round Lake fire truck.  It was Fire and Rescue Night and as we continued we noticed a young man being lifted into the seat of the truck; six-year-old Collin couldn’t have been happier especially when he was allowed to sound the siren, his smile got even bigger.  We look for Collin to be a fireman somewhere down the road.  Hats off to the speedway for this great night honoring our emergency services and first responders.

We stopped by the Tremont pit area and spoke with Kenny who was there to help his son, rookie Sportsman driver, Montgomery.  We complemented Montgomery on how well he’s been doing in his rookie season but as with most drivers, he wants to do better and find victory lane.  Kenny mentioned that he was happy to see the Pro Stocks getting a large $5,000 to win show. We sat on the bottom row of the grandstands to watch the features and spotted two young ladies sitting near us.  They were having a conversation with a gentleman who was seated near them.  After the racing finished we asked if they knew one another before the night and they said no.  They had struck up a conversation with Greg, who is normally in the pits at area tracks helping racers.  On Friday he was a fan and had been a wealth of information for Stephanie and Hailey, they got to hear about car chassis’ and activities of racing.  We believe this might be just one of the friendly conversations going on at area race tracks all over the country each race night. Sunday brought the season to a close at Glen Ridge, a special night, the final point night and a 50-lap Modified show sponsored by Palmer’s Service Center and Alton and Carole were in the house.  The winner of the special race was given a starting spot in the season finale, Fonda 200 paying $53,000 to win.  Josh Hohenforst, driving his DKM chassis, took home the $2500 winner share and the spot in the Fonda 200.

Walking along the stands on the fan side we found three-year-old Carsen of Gloversville who had a small racer in his hand and was sitting next to a small race track he had carved into the dirt.  Who knows, years from now we may run across him on a local track somewhere. It was a proud night for the Spraker race team and the Warner family.  Rocky and Jake took home two championship at The Ridge, Modified and 602 Crate Modified.  And to top off the night Rocky’s son, Tanner won his first career feature in the Limited Sportsman division. throughout, even into his time with the MVVDM where he currently races his familiar No. 124.