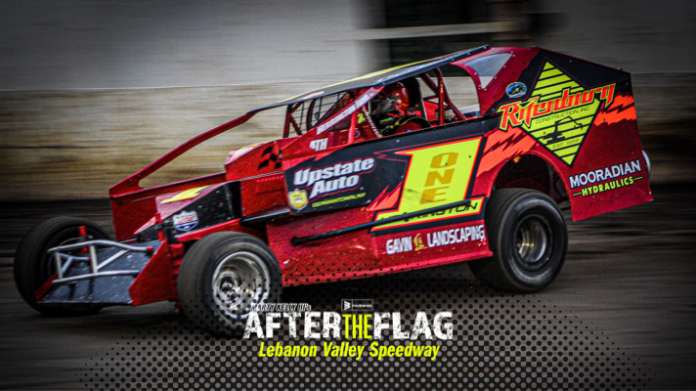 MARTY KELLY III / FOURWIDE – Jason Herrington of Brunswick, NY dominated the Douglas Industrial Cathy Plotz Memorial 24 lap small block modified event last Saturday night at Lebanon Valley Speedway, scoring his 2nd victory of the 2019 campaign.  Herrington won his qualifier race and took the race lead on the 11th circuit from Chris Curtis. While Herrington was sailing away, Andy Bachetti of Sheffield, Massachusetts was making his way through the field, passing Curtis with five laps to go and set his sights on Herrington who began dealing with lapped traffic. Bachetti closed the gap before it was over, but it was the one they call the “Flyin’ Farmer” picking up the victory with Bachetti second and Curtis third. Brett Haas and Alan Houghtaling rounded out the top five.
“Believe it or not this is a 2008 PMC that Steve Hough gave me. It’s on coils,” Herrington said of the combination that has proved to be stout for him.
“We wrecked the black car earlier in the year,” he continued, in reference to an accident in which he lost his brakes in turn three many weeks ago.  He plans to put a new car together for 2020.
Ed Bishop piloted a familiar #311 car owned by Brian Keough to a 15 lap pro stock victory, surviving a restart at halfway, fending off Nick Arnold, Steve Larochelle and Chad Jeseo. Gary Silkey was fifth.
John Virgillio passed Gary O’brien on lap 26 for the sportsman victory in the VP Summer Shootout Series victory. Kevin Ward was third with Whitey Slavin and Rob Maxon rounded out the top five.
Jesse Murphy and Ed Hatch won pure stock features with James Street and Jon Sheppard winning the dual and single cam four-cylinder features, respectively.
This Saturday, September 14th is the final night of racing for the 2019 season at the valley of speed, Champions will be crowned in the Small block, sportsman, pure stock and four cylinder divisions.