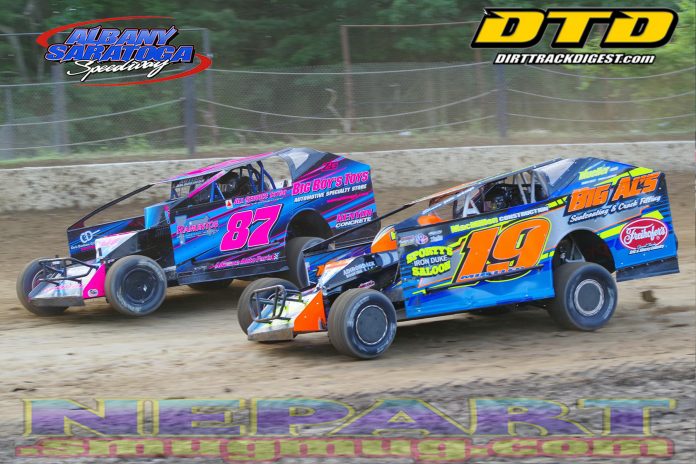 MALTA – Not even a full moon and Friday the 13th could jinx Jessey Mueller this time.
Mueller, who endured a miserable summer at Albany-Saratoga Speedway, finally had everything fall into place as he led flag-to-flag to win Friday night’s 35-lap small block modified shootout, which paid $3.000 to win.

The win was Mueller’s second of the year at Albany-Saratoga, but he went a long time between victories; his other win came on May 17, in the second race of the season.

“We really needed this one,” he said after the win.

His best move of the night came in the pre-feature draw, when he pulled No. 1. He led all 35 laps, but that doesn’t mean he didn’t have some nerve-wracking moments.

Most of that anxiety was created by Brett Hearn, who started fourth. Just three laps into the race, Hearn went to the top and took the long way around Mueller. But before the lap was completed, Accord invader Richard Smith spun in the second turn, bringing out a caution and keeping Mueller in the lead.

For 22 straight green flag laps, Hearn continued to dog Mueller, trying both the high and low grooves to get the lead. With 15 to go, Mueller was in heavy traffic, and it almost cost him the lead when he made hard contact with the lapped car of Dillon Steuer between the third and fourth turn. That allowed Hearn to close to within two cars lengths.

Elmo Reckner brought out a final caution on lap 32, and that was all Mueller needed, As he rocketed away on the restart, Perrego elbowed his way under Hearn in the second turn, and as the two Orange County Speedway rivals battled for second, Mueller pulled away for the victory.

“I hate starting on the pole, but you’ve got to take them anyway you can,” said Mueller of the win. “It’s not like I had easy guys behind me. I knew with Brett right there, it I made a mistake, I was done.”