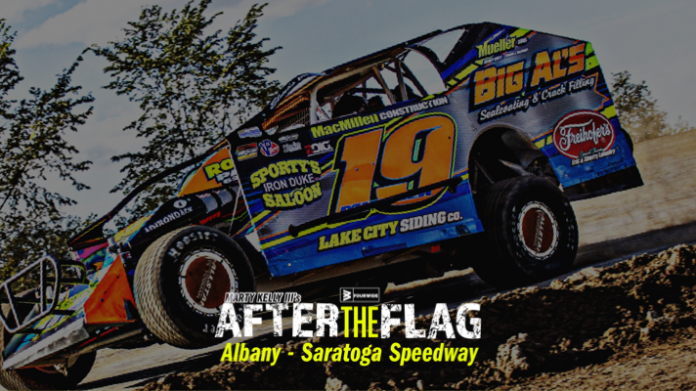 Mueller and Hearn sat on the front row for the 35-lap, $3,000 to win main event. Mueller ran the bottom and jumped out to the early lead while Hearn set his No. 20 up on the cushion and set his sights on the top spot.

Hearn, on the second circuit, launched off the top of turn two and edged out in front, but Richard Simmons spun out on the inside of turn two, bringing out a yellow and negating the led change.

On the restart, Don Mattison hit the implement tire at the exit of turn four and brought out yellow once more. Two laps later, Jimmy Cottrell spun out in turn three.

With the field bunched up for another restart with 30 laps remaining, it was evident that Ken Tremont from eighth, David Schilling from seventh and Marc Johnson from ninth were all on the move coming up to spots four, five and six.
Mueller and Hearn had a long green run to wage war once more with both drivers shredding the top, navigating lapped traffic as early as lap 15.
They chased each other past lapped cars without issue, until lap 30 when Mueller almost lost the whole deal up in turn three. Mueller went in deep and nearly contacted Dillon Steuer, allowing Hearn to close the gap.
Two laps later, the yellow flew again for Elmo Reckner, who slowed on the backstretch.
On the lap 32 restart, Mueller headed off to the front again, third place driver Anthony Perrego pulled a slidejob on Hearn for second.
Mueller led the final laps and had the DKM Cyclone Chassis digging and brought home the victory.
“What a great racetrack, hats off to Lyle and the crew,” Mueller told Mike Warren in victory lane. “I thought I was gonna be screwed down there but squared up with him on the door and we made it through.”
Mueller thanked all the fans for the support and his sponsors for helping him through a rough summer and a lot of bad nights.
Perrego was second, Marc Johnson was third with Hearn fourth and Rocky Warner rounding out the top five.