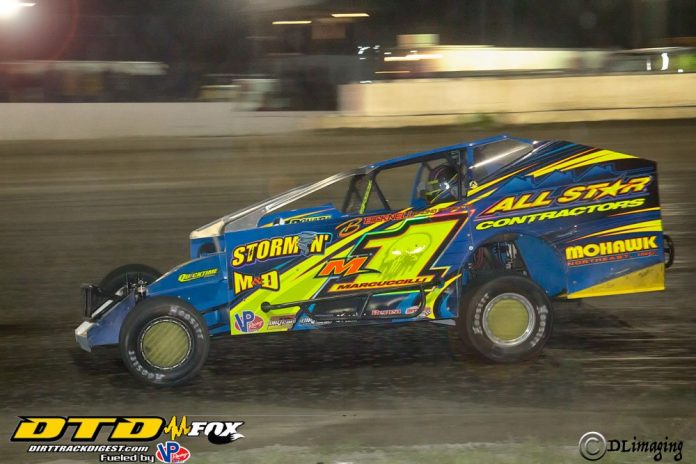 HOGANSBURG, NY – The Mohawk Nationals was in full swing on night number one brought to you by 97.3 FM CKON Radio. With four divisions in the pits there was not much space as nearly 150 cars packed the grounds of the Mohawk International Raceway as the DIRTcar 358 Modified Series, DIRTcar Pro Stock Series, Crossroads Tobacco Sportsman and Can Am Mod Lite Series drivers were ready for action.

The DIRTcar 358 Modified Series was ready for 75 laps of action and Dave Marcuccilli wasted no time going to the race lead over Billy Dunn, Ryan Arbuthnot, Louie Jackson Jr. and Michael Maresca. The track became very tricky for many drivers as one fast lane developed around the bottom which was making it very easy for Marcuccilli as he led the field going away by nearly a straight away by lap 6. On lap 7 Madison Mulder clipped an infield tire which brought out the yellow. On the restart it was again Dave Marcuccilli leading the way with Dunn, Arbuthnot, Michael Maresca and defending race winner Tim Fuller cracking the top five. On lap 32 a 4 car pile up took place in between turns one and two involving series regulars Mike Mahaney and Lance Willix. All drivers were ok. When the green returned not much changed as Marcuccilli continued to lead the way and despite the conditions making it tough to pass the former DIRTcar Sportsman champion was bad fast as he pulled away from a stout field but lapped traffic came into play with 20 laps to go which brought Dunn and Arbuthnot within striking distance. Still with no outside line the only way to get by was to wait for a mistake. On lap 71 the final yellow flew as Joey Ladouceur spun to the infield. On the final restart Dave Marcuccilli tried to pull away but Billy Dunn stayed right there to challenge. After a big paying Sportsman race got away from him a year ago the current 358 Modified rookie was able to hold on and notch his first ever DIRTcar 358 Modified Series win. Billy Dunn had an eventful night, upside down in time trials, flat tire in his heat and managed a runner up finish, Ryan Arbuthnot, Michael Maresca and Tim Fuller completed the top 5.

The 50 laps Mir Sportsman Series finale saw Brianna Ladouceur come into the night 10 points ahead of rival Shane Pecore and track position was going to be the key to this event. Shane Pecore drew the pole and would charge to the lead over Cedric Gauvreau, Devin Willis, Johnathon Ferguson and Thomas Cook. With one good grove on the track Pecore was able to dictate his own pace and maintain a comfortable advantage until lap 21 when the yellow flew for Chris Frennier, who spun in turns on and two. When the green returned it was once again Pecore in command with Gauvreau, Willis, Cook and Zach Arquiett making his way into the top five for the first time. On lap 24 the yellow would quickly come back out for Greg Snyder who slipped an infield tire in turn 4 ending his night. When the green flew again Pecore still was in charge while MIR Series Point leader Brianna Ladouceur was having problems making her way to the front after starting deep in the pack. Ladouceur would battle her way the number 10 position but had work to do to catch the leaders. As the laps clicked off lapped cars started to become a factor which tightened the lead battle up but with no outside lane Gauvreau and the rest of the top five were waiting for a mistake to try and capitalize. On lap 35 RJ Tressider and Ricky Thompson came together in turn one and the yellow flew. On the final restart Shane Pecore was able to drive away but Devin Willis would take advantage of a mistake from Cedirc Gauvreau groove into 2nd with Thomas Cook charging to third. In the end Shane Pecore was the dominant force collecting his third straight series win, 5th of the season and his third career Mir Sportsman Series title. Devin Willis would cross in 2nd over Thomas Cook, Cedric Gauvreau and Zach Arquiett.

Sid Harmer Jr. would take advantage of the inside lane at the start of the 35 lap DIRTcar Pro Stock Series event as he would lead the opening 7 laps over Nick Stone, Stephane Lebrun, Jay Corbin and CD Beauchamp. Track conditions made it difficult to pass but Harmer had a dominant race car as he pulled away and was looking to hide from a strong field. At the half way point Harmer was in full control and continued to lap cars with no issue as behind him Nick Stone held 2nd and Lebanon Valley regular Jay Corbin would make a big move taking the number three position as 2019 Cornwall champion Stephane Lebrun would make a costly error slipping up allowing Corbin to get by. As the laps clicked off Sid Harmer Jr. proved to be too much for the field and would go unchallenged throughout the entire event to record his 2nd career DIRTcar Pro Stock series win and 2nd in a row at Mohawk. Nick Stone would claim 2nd over Jay Corbin, Stephane Lebrun and points leader CD Beauchamp.


The Can Am Mod Lite Series set a record for a starting field at Mohawk as 36 drivers took the green flag at the start of the 20-lap feature event. Justin Williams would lead early on with Eric Caron and Michael Forcier giving chase. On lap 8 Eric Caron would take over command of the field bringing Forcier to 2nd over Williams, Tucker Halliday and Jeff May. On lap 9 Keven Boucher Carrier would break in turns three and four bringing out the yellow. On the restart it was Michael Forcier taking command over Caron, Halliday, Williams and Jeff May. As the laps wound down Michael Forcier was in control but Tucker Halliday was making a big move on the outside lane and tried to grab the lead. On the final lap the red would fly as 2019 track champion Kevin Foster slowed in turn three and Tristan Dibble spun to avoid sending him into the infield and flipping several times. Dibble was unhurt as he climbed from the car right away under his own power. On the final restart Forcier went to the bottom but Tucker Halliday kept his car up on the top side. A drag race to the line saw Michael Forcier hold on by a half car length for the win. Halliday would grab 2nd over Eric Caron, Jeff May and Justin Williams.

Night number one is complete at the Mohawk Nationals and the Big Block Modified Super DIRTcar Series along with the DIRTcar Sportsman North Regional series and the STARS Mod Lite Nationals. Pit gates open at 3pm with spectator gates at 4pm. Hot laps and time trials are slated for 6:15pm Stay tuned to our website at mohawkintlraceway.com and our Facebook and Twitter pages for more details.