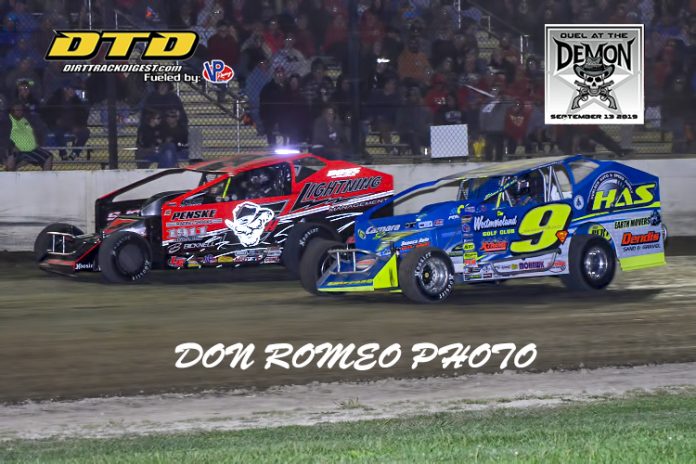 Chris Hile did everything right in Friday night’s Super DIRTcar Series Duel at the Demon 100 at the Brewerton Speedway. The weekly regular conserved his race car throughout the first half of the 100-lap affair giving him a shot at a victory at the end. Unfortunately, he came up one spot short in his chase for gold finishing second to good friend Mat Williamson.

“Second is great,” said Hile afterwards. “It is good momentum for us coming into these big shows at the end of the year. We’ll just build on it and it go from here. Congrats to Mat. He’s one of my best friends. It’s fun to be pitted next to him and finish one two. I’m sure we’ll have a couple beers and celebrate later.”

Hile made the redraw going off from the seventh starting position. Early on his kept his No. 5H Bicknell planted on the bottom of the speedway. His goal was to keep the tires underneath him for a charge late in the race.

There was one consistent to Hile’s race.  As he worked the inside lane he had Ryan Godown beating the cushion on the top next to him. The pair were seemingly together for the whole race until Godown faded after the final restart.

“We were really good,” cited Hile. “I just kind of hung out the first 50-laps or so. I just started picking them off from there. It was a good run between myself and Godown for about it 80 laps it seemed like. Finally, I got around him and we tried to set sail on Mat. I think if we caught lapped traffic a little sooner we would have got him.”

Hile knew he had to stay on the bottom to conserve the tires. Brewerton has a history of beating up your tires if you bounce off the cushion for 100 laps. He was conservative, maybe even too conservative with it as he had some tire left over after the race.

“This is place is odd, it’s a smaller track, but if you get up on the top and search for momentum it definitely does hurt the tires,” commented Hile. “There is a cat and mouse game. You can go up there a couple laps and gain some ground. The biggest thing is you need to hold your car straight. The more you hold it straight the less you scrub on that right rear tire.

“We had a lot of tire left. I’m kicking myself in the butt a little bit. I guess I should have used it up a little sooner. With all the yellows we were having it played into our hands. I just needed to get up to second sooner and I could have challenged Mat a little more.

Hile eventually moved around Godown into second on a lap 82 restart. He chased Williamson from that point forward. Williamson caught traffic with less than 10 to go allowing Hile to close right in. He got to the bumper on the final lap only to have Williamson hold him off.

“The last lap I was driving off of Mat,” mentioned Hile. “I was going to do the opposite of whatever he did. He committed late into one and it screwed me up. He did a great job. He said he was hanging on at the end. He did a fantastic job of making it wide and keeping his lane. There was definitely something left down on the bottom of one and two if you really whoaed it up. We just weren’t close enough to kind of throw that and get a shot at it.”

Like Hile, Larry Wight was conserving his tires for a late race charge. He had a lot left to give at the end of the 100-laps as he too stayed on the bottom for much of the first half of the race. He cited the lack of long green flag runs as the reason tires weren’t as much of a factor as they traditionally are in the event.

“I don’t know how those guys were able to stay up there running the top like they were,” stated Wight. “I just kept running the bottom and saving my tires hoping we’d get a long green flag to let theirs get good and hot. Then they’d seal them up and we could have drove right underneath them. There were too many cautions. We couldn’t get a lot of green flag laps, but we’ll take it. We rallied back to third. I think at the end it definitely showed that we had a better tire, but too little, too late.”

Billy Decker was in the fourth and final group of time trials. He ended up scoring the extra $100 for the fast time award with a lap of 14.548…

Speaking of Sheppard, a multi-time series winner at Brewerton, he never really got things going in the main-event. He redrew the 11th starting spot for the feature. He advanced quickly to the top five before leveling off. He ran as high as third, but could never get over the hump to offer a challenge for the win…

Western Pennsylvania pilots Brian Swartzlander and Rex King Jr., made the trek east. Swartzlander qualified through his heat race and finished 22nd in the main. King’s draw put him in one of the hardest heat races of the night. It included Wight, Decker, Jimmy Phelps as well as Williamson and Alan Johnson. He missed out by a couple of positions before doing the same in the consolation event…

Peter Britten used a provisional to make the main-event before coming from deep to finish in the top 10 in seventh.