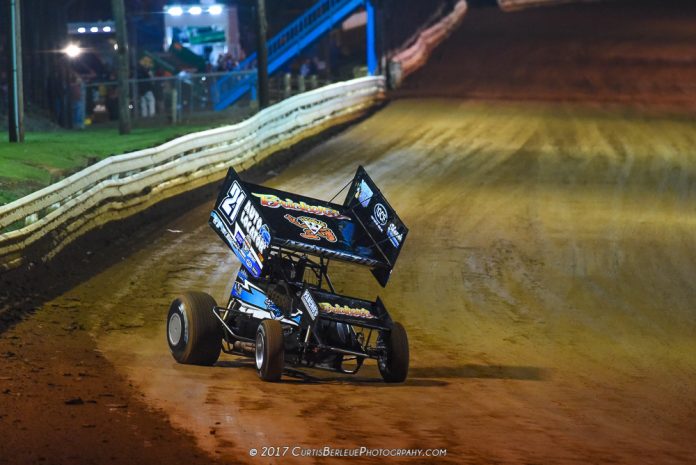 MECHANICSBURG, PA – Brian Montieth fought the battle with Freddie Rahmer and won the war at Williams Grove Speedway on Friday night by taking the win in the 25-lap Dirt Classic Qualifier for 410 sprint cars.

For Montieth, the victory broke a 17-month win drought at the oval after last scoring a win in April 2018.

The win means that the Phoenixville flyer has earned a guaranteed starting spot in next Saturday’s prestigious Dirt Classic at nearby Lincoln Speedway.

In the 305 sprint main on Friday night, Dave Grube picked up the win from the second starting spot.

The initial start of the 410 sprint car feature saw a yellow flag unfurl when the rear of the field bunched up in the fourth turn as it came to the green flag.

Montieth started fourth in the main event when action got underway and he was able to muscle by Ryan Smith for second on the opening lap, behind polesitter and leader Freddie Rahmer.

Montieth got a clear shot at Rahmer on a lap two restart but Smith returned the favor and reclaimed second with a turn three dive.

Smith ended up losing second on the seventh tour when a lapped car pushed him high as he entered the first turn, allowing Montieth to bolt by on the low side of the first and second turns.

By the halfway point, Montieth had run down Rahmer’s advantage and the pair was nose to tail across the line as they worked the backmarkers.

Setting a hectic pace on a quick racing surface, Rahmer did his best to dart through traffic and preserve his lead but a miscue as he worked through turns three and four with 10 laps to go allowed Montieth to buzz the top and snare control at the line.

Rahmer remained hot on Montieth’s heels however and with 19 laps complete he got back to the leader’s inside as they raced through the first corner.

Montieth then drag raced Rahmer onto the backchute before edging ahead on the cushion into the third turn and when he had to check up for a slower car just in front, Rahmer was that close to his tail tank that he had nowhere to go and ended up smashing into the outside fence, causing a yellow flag.

Smith then inherited second spot for the restart but failed to challenge.

Another restart with four laps to go after Trey Starks dropped ouf of fifth spot again found Smith failing to produce a challenge as Montieth sped to the win, worth $5,000.

Heats for the 34-car field went to Garret Bard, Proctor, Drew Ritchey and Duke with the consoaltion going to Keith Prutzman.