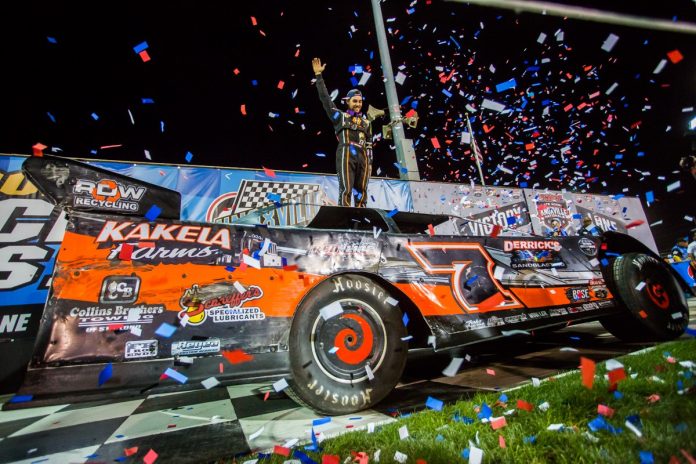 Weiss started on the pole but fell to second behind Madden on the opening lap – trailing the South Carolina racer for the first fifteen laps of the 25-lap main event. Madden got bogged down in heavy traffic and that allowed Weiss to slip by for the lead.

Madden rallied to make a final attempt to overtake Weiss on the final lap but came up short of his fifth Lucas Oil win of the season. Josh Richards brought the Clint Bowyer Racing, Rocket home in third after starting in eleventh. Iowa native Tyler Bruening recorded his best career finish at Knoxville by taking fourth and Don O’Neal completed the top five.

“It’s awesome to be in Victory Lane here at Knoxville,” said Weiss. “We haven’t been able to capture the big one here yet, but this is our chance. After last night, we were happy with that. We were locked into the show for Saturday and we debated switching cars tonight and trying something. Shawn [Gage] didn’t want to, because he knew this car is good and he has the confidence in me to keep it in one piece.”

Weiss added: “Everytime we touch the track; it gets better and better. I didn’t mind that Chris [Madden] set the pace at the start. We don’t seem to fire like those guys at the start of a race, but we are there at the end. It was good to learn off of him [Madden] to know where we can get better. I used to play this track on a video game and now we are here in Victory Lane.”

Madden came up just short of his first-career win at Knoxville, crossing the line a close second. “We had a good car for the first half of the race, but I got extremely tight and I couldn’t turn across the middle of the corners. I was just trying to bide my time and I was hoping not to get into traffic, that opened the door for Ricky. To have the night we had last night and to bounce back and have the night we had tonight is great. We can tune on it now and be ready for tomorrow night.”

Richards’ stirring run was without the benefit of a single caution flag during the race. “We absolutely needed a caution. I feel like I was running those top two down. We had a fast car. I was relying on the cushion get up there. That was more of an old-school Knoxville with a ledge up there by the wall. It was slick all the way across the track and we could carry speed wherever we wanted to go. I had a lot of fun out there.”