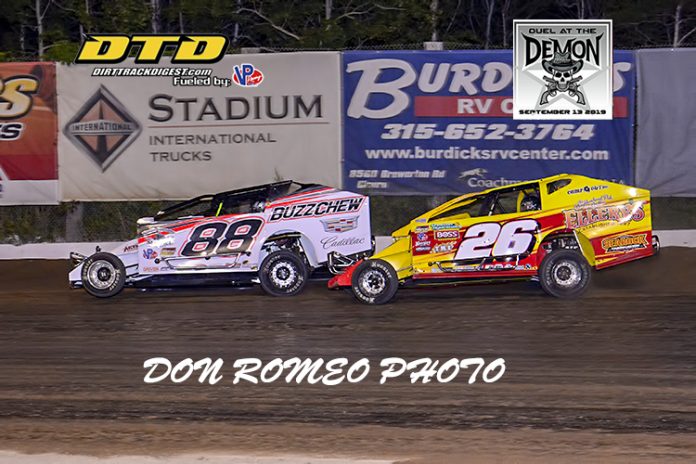 Mat Williamson has been the model of consistency with the Super DIRTcar Series in 2019. Coming into Friday night’s Duel at the Demon 100 the St. Catharines, Ont., driver had finished in the top five 10 times and in the top 10 13 times in 15 races. It was good enough to put him second in the points behind perennial champion Matt Sheppard.

The one thing missing on the Super DIRTcar Series resume was a win. Well, after Friday night at Brewerton Speedway, that is no longer the case. Williamson got his first series victory since 2017 at The Dirt Track at Charlotte while also giving Buzz Chew Racing their first ever series triumph. It is something they’ve been chasing since February of 2016. “They mentioned we were second in points and called us consistent. Consistency is cool, but winning races is what this deal is all about. If we would have went a whole year without a win, I wouldn’t have known what to tell Buzz at the end of the year. I’m happy to get one done for him. He deserves it more than anybody.”

Williamson was blessed to have a large crew pit-side once again. Nearly everyone involved in his $100,000 triumph at the Orange County Fair Speedway a month ago was in the pits helping out. Albeit, in a less stressful environment.

“We had the whole team that was at Orange County here tonight,” said Williamson. “There wasn’t as much work to do, it wasn’t like Orange County where everyone was working. The moral support was good and I can’t thank everyone enough.

“It’s been a long, win-less deal on the tour for me, but these guys work so hard that they deserve it more than I do really. It’s awesome to win for these guys and to win for myself.”

Williamson took the lead early after starting in the fourth position. He went by Larry Wight on the outside of the speedway. It was a lane he never really left during the race. He used that line to check out on the field on multiple occasions.

“When I drove by Larry at the beginning I was pretty excited,” said Williamson. “Every restart we would check out and (Dave) Farney would give me the signs. You get excited when you got a big lead like that, but you start to worry and start to think about when they are going to run you down.”

Williamson was never really challenged in the 100. Each time he got to traffic the caution would come keeping clear track in front of him. That was key. His only experience with the back of the field came late. At that point he did all he could just to make the car wide while doing his best to navigate his Bicknell around the slower cars.

“I wasn’t good with lapped cars,” mentioned Williamson. “It seemed like when I caught the lapped cars at the end I was struggling. I’d used my tires up and what not. To get them cautions was a sigh of relief. We just needed to hit our marks. I probably used up everything I needed to use up. Fortunately, the guys gave me such a hot rod that it was easy for me to drive.”

The struggle was real in the final handful of laps. Chris Hile made it almost to his back bumper on the final circuit. Williamson just focused and did what he had to do in order to get the No. 88 to victory lane. Which he did, earning himself and the team a much needed Super DIRTcar Series win a nice $7,500 to go along with the trophy.