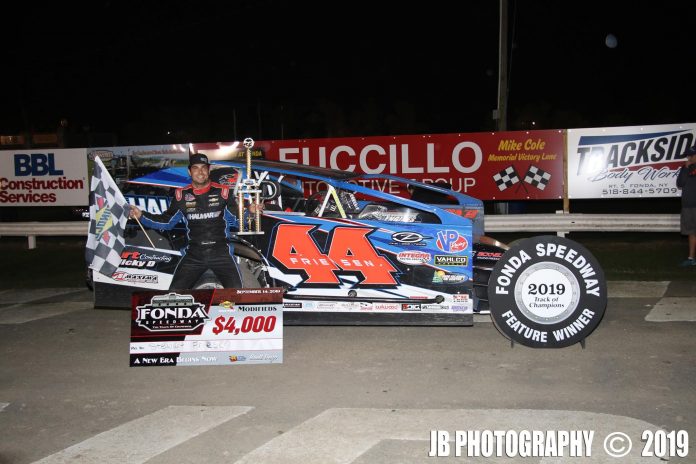 FONDA, NY – After the annual break for the Fonda Fair, the “Track of Champions” Fonda Speedway was back in action on Saturday evening with a seven division racing program presented by Dodson Construction. A late rain shower tried to spoil the party but the track crews and all of the drivers in the Swagger Factory Apparel Crate 602 Sportsman did a great job getting the track back so that the racing program could be completed.

Winners on Saturday evening at Fonda included Stewart Friesen who drove a brand new Bicknell car to victory in its maiden voyage in the Sunoco Racing Modified feature, Tim Hartman Jr. who was the winner of the KOD Northeast Nationals in the Swagger Factory Apparel Crate 602 Sportsman feature, Kenny Gates in the Algonkin Motel Pro Stock feature, Ed Hatch in the Trackside Body Works Street Stock feature, Jeff Trombley in the CRSA Sprint feature, and Ken Hollenbeck in the Four Cylinder Cruiser feature.

Fonda Speedway Hall of fame driver CD Coville was on hand during pre-race ceremonies to present the MVVDMS Rocking Chair to its new owner after a season long raffle event. On victory lane along with CD and the MVVDMS officials and drivers was the beautiful #61 race car owned by Brian Gray which was a replica of the one CD once raced. John Wentworth was the winner of the rocking chair which was donated by Al Kugler and custom painted by the one and only “Custom” Bob Niemietz.

When interviewed by Mimi Lazzaro Coville said “I really wanted to do some hot laps tonight but I don’t think my doctor would like it very much. Maybe 20 weekend.”

On victory lane Mimi Lazzaro also shared some memories by saying “I have some cool memories of growing up here in the infield pit area with my father Lou Lazzaro who used to pit down in turn four. This year it has been 50 years since my father won the Fonda 200 back in 1969.”
Fonda Speedway flagger Joe Kriss performed a great rendition of the National Anthem and then it was a solid six hours of great racing in all divisions after pre-race ceremonies were completed.

The 30-lap Sunoco Racing Modified feature began with Brian Gleason and invader Anthony Perrego on the front row with Perrego out to the early lead. Stewart Friesen started fifth in the event and by completion of lap one he was in the third position in his brand new Bicknell car. By lap six the top three of Gleason, Perrego, and Friesen pulled away from the rest of the field with the first caution of the event out on lap six for the fifth place car of Danny Varin who was stopped in turn four. Varin would continue on at the rear of the field.

On the restart, Perrego was the new race leader with Friesen also getting by Gleason for the second position. Just after the green flag flew again the caution was out for Ancel Collins and Bobby Varin who were involved in a wreck between turns one and two. Collins was okay but done for the night while Varin continued on at the rear of the field.

Perrego chose the outside on the restart and continued to lead while Friesen and the new third place car of 2019 Fonda Speedway Modified Track Champion Rocky Warner followed trying to figure out a way to get past the high flying Teo car of Perrego. Dave Constantino was another car that was on the move after starting 11th, getting into the top five just before the halfway point in his DKM Cyclone car.

Friesen figured out a way to challenge Perrego over the next few laps and took over the lead with a pass on the inside at the finish line to complete lap 18 just before the red flag came out for a wreck in between turns one and two involving the fourth place car of David Schilling and Josh Hohenforst.

Schilling’s car flipped over and came to rest against the wall while Hohenforst who was running the extreme outside on the track as many other drivers were had nowhere to go and made contact with Schilling. Both drivers were okay at the track and after checking on Schilling early Sunday morning New York State Stock Car Association Fonda Speedway representative Bonnie Mortensen said that Schilling was doing okay.

Friesen chose the outside for the restart and at the drop of the green flag pulled away making it a race for the second position between several cars. When the checkered flag was thrown Friesen was the winner of his fifth event of the season at Fonda and the 59th of his career at the “Track of Champions” in the Halmar #44 Bicknell car. Perrego, Constantino, Warner, and 10th place starter Matt DeLorenzo completed the top five.

“I love this place,” Friesen said in the Fuccillo Automotive Mike Cole Memorial Victory Lane as his son Parker did his famous roof dance. “The 18 (Perrego) was fast and they have a lot of good stuff in that program so honestly I didn’t know if I was going to be able to pass him or not but he was starting to get free off of turn four and I was able to get by. The track was super smooth and awesome tonight so thanks to the Fonda track crew and thanks to my guys who prepared two new race cars this week for Jessica and I to race tonight.”
After a rain delay the 50-lap KOD Northeast Nationals took to the track for the Swagger Factory Apparel Crate 602 Sportsman feature with outside front row position starter and 2019 Fonda Speedway Track Champion Tim Hartman Jr. the early race leader. Two consecutive cautions before a second lap was completed forced a single file restart with Hartman again leading the event at the drop of the green flag.

Hartman was out to a straightaway advantage by lap 10 with sixth place starter Brian Borst the new second place car while JaMike Sowle was right behind in the third spot. Borst and Sowle swapped the second position several times with the top five at the halfway point consisting of Hartman, Borst, Sowle, 11th place starter Brian Calabrese, and 16th place starter Bobby Hackel IV.

Hartman was in heavy lap traffic from the halfway point forward and had a close call on lap 32 when Tim Falter spun right in front of him in turn one to bring out the caution. Hartman chose the outside on the restart and again pulled away at the drop of the green flag while Borst and Sowle continued their battle for the second position.

The yellow was out one last time with three laps to go for Joe Williams who slowed coming out of turn four setting up a three lap battle for the win. Sowle took the second position on the restart and got close to Hartman on the final lap but it was Hartman who took home his sixth victory of the season at Fonda and the 10th of his career in the division in the Parillo Services #22 Troyer car.

“It’s great to come back after a break for the fair and get another win,” Hartman said in victory lane. “I was worried about the rain but we made as many adjustments as we could after the rain delay and it got us another win.”

Kenny Gates started the Algonkin Motel Pro Stock feature on the outside of the front row and took the lead at the drop of Joe Kriss’ green flag with Jason Morrison in tow. Sixth place starter Josh Coonradt was the new third place car on lap two with Gates out to a straightaway advantage on lap five. Fifth place starter Luke Horning got by Nick Stone for the fourth position while Coonradt took over the second position from Morrison on lap eight.

Horning also got by the slowing car of Morrison for the third position and at the halfway point Horning was second after getting by Coonradt. The battle for second continued to the checkered flag between Horning and Coonradt while Gates was in lap traffic on lap 13. Nothing would slow Gates down on this night however as he negotiated lap traffic and went on to his third victory of the season and the 83rd of his career in the division which is on top of the All Time Pro Stock Win List at Fonda.

Coonradt, Horning, Stone, and Shane Henderson completed the top five in the event.

“We’ve been working on this car, traveling and experimenting with it,” Gates said in victory lane. “Now we have a setup that I’m not real comfortable with but I just have to get in it and drive it. Thanks to my crew for their long nights working on this car and to Pete Stefanski and the Beldon’s who have helped us with the setup. The track was fast tonight and couldn’t have been any better.”

Zach Sorrentino led at the start of the Trackside Body Works Street Stock feature but when he did a 360 degree spin in turn two it was Ed Hatch who took over the race lead while Sorrentino continued on back in the fifth spot. Hatch led the remaining laps for his second career win at Fonda followed by Michael Arnold, Sorrentino, Al Relyea, and Stephen Young.

Ken Hollenbeck led every lap of the Four Cylinder Cruiser feature for his seventh win of the season and the 49th of his career in the division at Fonda over Dale VanAllen, Wayne Russell, Jeffrey Tubbs, and Katrina Bean.

Jeff Trombley started the CRSA Sprint feature on the pole and led at the drop of the green flag to start the 20-lap event with Darryl Ruggles second. After starting sixth, Mike Kiser was the new third place car on lap five while Trombley was out to a straightaway advantage. Kiser took the second spot away from Ruggles on lap eight and was challenging Trombley for the lead on lap 12.
On the inside of turns one and two on lap 17, Kiser got by Trombley for the lead but by the time the lap was completed Trombley retook the lead at the line to complete the lap. Trombley went three wide at times around lap traffic to maintain the lead and get the win, his second career CRSA victory at the “Track of Champions”.

“He got close,” Trombley said of Kiser in victory lane. “He certainly gave me a run for it.”

Next up at the “Track of Champions” is the Fonda 200 weekend on Thursday September 26 through Saturday September 28 so please connect with the Fonda Speedway website and Facebook pages during the next couple weeks for details on the $53,000 to win event!