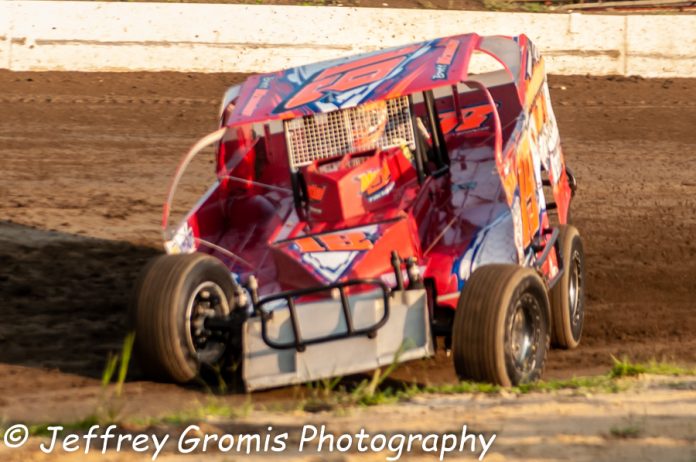 BECHTELSVILLE, PA – Brett “The Threat” Kressley avoided being involved in two red flagged incidents that blocked the track during the running of the T.P. Trailers NASCAR 358 Modified 30-lap feature on Saturday night at Grandview Speedway in the action sponsored by WNPV 1440 AM Radio, Lansdale. The Orefield leadfoot went on to chalk up his third win of the season.

Ryan Beltz overtook Tom Miller to become the new leader on the sixth lap of the TP Truck Equipment NASCAR Sportsman 25-lap feature to claim his first win of the season and become the 15th different winner in the series. The last time Beltz stood in victory lane was June 30, 2018.

Providing the feature winners met the necessary requirements, they received monetary awards from T.P. Trailers and a certificate from VP Fuels for product awards. The Dan’s Deli ½-way hoagie award recipients were Jesse Leiby and Beltz. Wyatt Harrar, who finished 10th in the Sportsman feature received an extra $100 for being the highest finishing crate engine driver.

Kressley and Beltz may have won the battle by winning their respective features, but it was Duane Howard and Brad Brightbill that won the war claiming the 2019 point championship title in their divisions.

Howard, involved in some early mishaps finished seventh, but had enough points to actually clinch the crown last week; earned his sixth Modified point title at the 1/3-mile oval behind the wheel of the Norm’s Save Station/Norm Hansell-owned No. 357. Howard, who praised Norm and the crew for providing him with a great car powered by a Carroll Hine engine every week, said it takes a team effort to win a championship.

Sportsman point champion Brightbill, who missed a feature earlier in the year on the night they ran a make-up feature in which he had engine problems and didn’t participate in the regular show feature, still had enough points to earn his first title ever in his self-owned No. 19. He became the fifth different driver to earn the title since 2015.

Kicking off the weekend will be the Freedom 38 Sportsman action on Friday night at 7:30 p.m. The event pays $2,000 to win and is sure to attract a stellar field of Sportsman racing talent.

The Delaware Auto Exchange Mid-Atlantic Sprints will also be part of the doubleheader show. Featured with the Sprints will be standout racers such as Eddie Wagner, Tom Carberry, Tim Tanner, Jr., and others.

Jesse Leiby, a rookie that started competing midway through the season, took the early lead in the Modified feature trailed by the son and father duo of Steve and Ray Swinehart; Brett Gilmore and Craig Whitmoyer.

With five laps completed, Ray Swinehart took over second and set his sights on Leiby.

The first yellow was thrown on the 17th lap when Louden Reimert slowed between the third and fourth turn, but then pulled away. R. Swinehart, winless since the Forrest Rogers Memorial on September 1, 2018, became the new leader when action resumed.

The red had to be thrown on the 19th lap for a multi-car accident that blocked the track that eliminated defending point champion Mike Gular and Frank Cozze. Eight cars were out of contention on the restart red in turn one. It was Swinehart in front when racing went green again followed by Doug Manmiller, Leiby, Kressley and Whitmoyer.

Kressley was slicing through the pack advancing a position almost every lap and by the 22nd lap he was challenging Swinehart for the lead.

A new leader emerged on the 24th lap when Kressley stormed past Swinehart for the number one position to become the third different front runner.

Once Kressley took command he never looked back and pulled the family-owned No. 19K into the winner’s circle to post his 12th career Modified feature victory. Claiming his season best finish in second was Swinehart followed by Manmiller, who despite a damaged race car in third; early leader Leiby in fourth and Whitmoyer fifth who had his best run since May 4, 2019.

Sportsman action saw Tom Miller take the early lead to set the pace for three laps before the red was thrown when one of the back runners was pinched into the third turn guard rail which triggered a chain reaction that eliminated ten cars. Jack Butler, who was also involved, was shaken up a bit. Miller resumed the lead on the restart with Scott Kohler, Beltz, Dean Bachman and Wyatt Harrar in pursuit.

Beltz moved into second on the fifth lap and one lap later he put the Just Cruisin’ No. 221 at the head of the pack.

Within no time Beltz had a straightaway lead built up leaving Kohler, Bachman, Brandon Edgar, a feature winner earlier in the year and Brian Hirthler dicing for the remaining positions.

Positions behind Beltz were constantly changing, but he never faltered and went on to garner his third career win. Having his best finish of the year was runner-up Bachman, followed by Hirthler, newly crowned point champion Brightbill, who managed to come home in fourth after being involved in the third lap incident and having to go pit side before rejoining the race in time and Brad Arnold, who was also a feature winner this year.

Fans attending Friday’s doubleheader featuring the Freedom 38 for Sportsman and Mid-Atlantic Sprints will also have this as the final opportunity to purchase their Freedom 76 tickets for just $35 rather than the race day price of $40.

Admission for the Friday night show is $12 for adults, $5 for youngsters 6 through 11 and admission is free for kids under 6. Starting time is 7:30 p.m. There is no rain date for this event.

Then on Saturday the $25,000 to win dirt track racing classic, the 49th Annual Freedom 76, is expected to attract many of the top names. Gates for advance ticket holders open at 3 p.m. while admission gates will open at 3:30 p.m.

The first qualifying event will get the green at 7 p.m.

Adult tickets are priced at $40, youngsters 6 through 11 pay 10 and kids under 6 are admitted free.