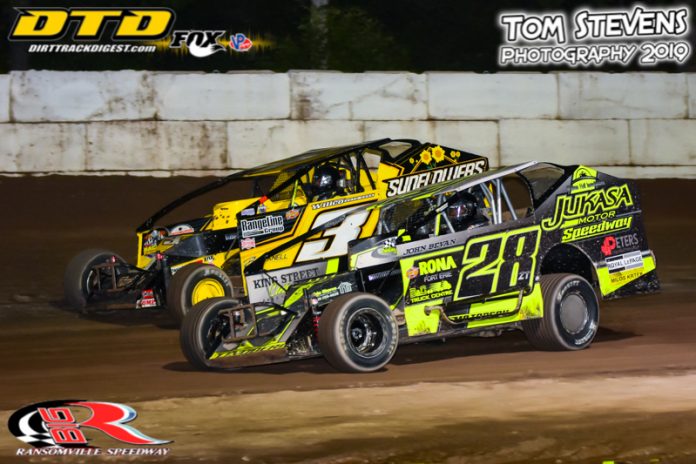 Multi-time series champion Rex King Sr and Jim Rasey were on the front row for the BRP Modified Tour’s inaugural visit to the Big R for their 35-lap event with King Sr showing the way early. Steve Barr slowed on the front straightaway to bring out the races’ first caution with three laps complete. The restart would see Sr continue to show the way as Rex Jr would take third place away. Racey would take the lead on lap six and Alan Johnson would move into second as King Sr got loose off turn two. Johnson would real in leader Rasey while working lap traffic. Rex King Jr brought out the caution on lap 15 after spinning in turn three. On the restart, Gary Lindberg would move into third and battling with Johnson for second. AJ Slideways would pass Racey for the lead with 15 to go. Lindberg would reel in Johnson for the lead with 10 laps remaining. Lindberg would complete the pass while working the outside of the racetrack to take the lead away with nine laps remaining. Justin Hears would move into second after a lap 27 restart. Lindberg would pull away late in the event and would go on to score the win. Hears, Brachmann, Johnson, and James Sweeting would complete the top five.

Chris Dziomba and Pete Stefanski would bring KiPo Chevrolet Street Stocks to the green flag for the King of the Hill 75 with Stefanski showing the way. Anthony Guthrie would move into second with Dave Bailey moving into third. Bailey would move into second on lap seven, just as Stefanski was about to put a lap on backmarkers. Bailey would be able to reel in Stefanski while in lap traffic but Stefanski would be able to hold the lead. Ryan Beagle spun on the back straightaway to bring out the races first caution on lap 24, erasing a near second lead for Stefanski. On the restart, Bailey and Stefanski would battle and exchange the lead several times with Stefanski edging out Bailey to lead at the lap 35 break. The second segment would start with Stefanski continuing to show the way as Jaren Israel passed Christopher Hale to move into position number six. Casey Jonathan slowed to bring out the caution on lap 40. The restart saw Israel move up into fourth place as Stefanski, Bailey, and Billy Bleich continued to be in the top three positions. Israel would challenge Bleich for third on lap 55 but Bleich would be able to keep the position. Bailey would close in on Stefanski in the late going and would challenge for the lead. Stefanski would hold off Bailey for the win.

Matt Hornquist and Chris Leone were on the front row for the Gippsters Collision Mini Stocks main event with Leone showing the way. Leone and Hornquist would pull away from the rest of the field as Cole Susice moved up through the field from his eleventh starting spot and would battle with Steve Matson for third place at the races’ halfway mark. Susice would complete the pass while working lap traffic with less than five laps remaining. Leone would hold off Hornquist to score the feature win.

Alex Payne and Darrell Borkenhagen were on the front row for the Sportsman/Novice Shootout with Payne showing the way as Derek Wagner and Andrew Smith moved into second and third. Off a lap five restart, Wagner would take the lead away as Garrison Krentz passed Andrew Smith to take over third place. Krentz would then pass Payne to take over second and would go after Wagner for the lead. Brian Harris would bring out the caution after coming to a stop in turn three after being several laps down with 11 laps remaining. On the restart, Andrew Smith would capitalize on a mistake to take over second as Wagner continued to lead. Wagner would hold off Smith to score the win.
Plans are being finalized for the annual Awards Banquet. Follow along on Ransomville’s social media pages for more information.