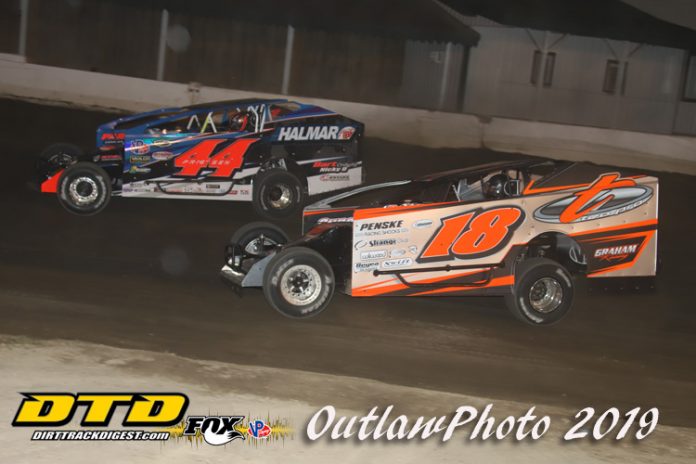 Stewart Friesen did not have a traditional Stewart Friesen type season at the Fonda Speedway this year.  He is usually the leading winner at the facility during a given season even though he misses a handful of events due to his NASCAR Truck Series responsibilities.  That just wasn’t the case in 2019.

Friesen watched as Rocky Warner went on a tear winning the title and leading the field in wins.  On Saturday night, Friesen got one of those wins back as he dominated the final 30-lap feature while earning $4,000 in the final event before Fonda 200 weekend.

The win came with a twist as Friesen drove to victory aboard a new Bicknell mount rather than the DKM Chassis’ that he’s run the last three years while also dominating the fields at Fonda.  Afterwards Friesen spoke about the change with DirtTrackDigest.com and why he felt it was necessary to make.

“Nothing in particular, it was time to try something with our 44 team,” he said when asked about the switch.  “Eric Mack and Dave (Constantino) and Kyle (Hoffman) at DKM have been good friends and were good to me.  We put in three solid years together and won some big races.  We still have two of them together.  It’s not like this is the end of the deal, but it was time, I felt like, that the 44 team to try something.

“Chris Larsen supported the decision just to try.  It turned out we might be on to something.  We’ll see.  Like I said, there is still one above us here that we were going to roll out just in case.  I still respect those guys.  They got a couple of wins last weekend and last night with Jessey (Mueller) and Josh (Hohenforst).  That’s good.  It was something, like I said, it was something we needed to do for our race time.”

A full interview with Friesen from the night can be watched by clicking here.

Anthony Perrego had nothing to hang his head about on Saturday night.  In only his second career Fonda Speedway start the Montgomery, N.Y., driver finished second behind Friesen.  He led a portion of the race before Friesen finally made his way by.

“It is pretty important coming up here to run good,” commented Perrego.  “We had a good car at the Deyo race and that was with sail panels.  Tonight we were back to the traditional windows and I felt like we had a good car all night.  We were just as fast as Stewy there in the heat race.  We made a little bit of an adjustment for the feature and the car wasn’t bad at all.  His car was just a little bit straighter than mine is all.”

Perrego used Saturday night as a test session for the upcoming Fonda 200.  He’ll also look to come back on Thursday, September 26 to get some laps as well as he hopes to dial in his Ray Graham racing No. 18.

“This is my second time ever being here,” cited Perrego.  “We are picking it up pretty quick.  We got a data test a couple Thursday’s from now and we’ll throw some more things at it.  Hopefully we’ll get through the heat races and in 200 laps anything can happen.  I’m looking forward to it.  We got a good piece here with Ray Graham.”

Constantino On the Move

Dave Constantino was on the move throughout the 30-lap feature.  Off all the podium finishers, Constantino started the deepest after redrawing the 11th starting spot.  He was a force coming forward and ended his night up in third with his No. 34 DKM Chassis.

“I was just trying to take my time, not beat the car up and drive into the walls,” said Constantino with a laugh.  “The last time we were here I ripped the back of the car off.  I just wanted to bring it home in one piece.”

Constantino had a great battle with Rocky Warner for the third position.  The pair swapped the spot a couple of times before Constantino finally settled into the position.

“He did not want to give it up,” mentioned Constantino.  “I was faster on the top in one and two.  Then he showed his nose down on the bottom of three and four.  It was good down low so I got back down there.  I was trying something to catch the leaders.  At that point there was nothing left to do.”

He did some different things with the car that paid off as he did some testing as well in preparation for the 200 in a couple weeks.

Perrego, Constantino and Friesen won the heat races on the night for the 25 cars in attendance…

David Schilling went for a wild ride on lap 18 of the feature.  Schilling caught the wall in turn one and started flipping.  His flipping ended in turn two with a destroyed race car.  Contact was also made by Josh Hohenforst.  Thankfully both drivers weren’t hurt in the crash…

Roger Henion Jr., had his night end in hot laps when the transmission output shaft bearing and yoke broke.