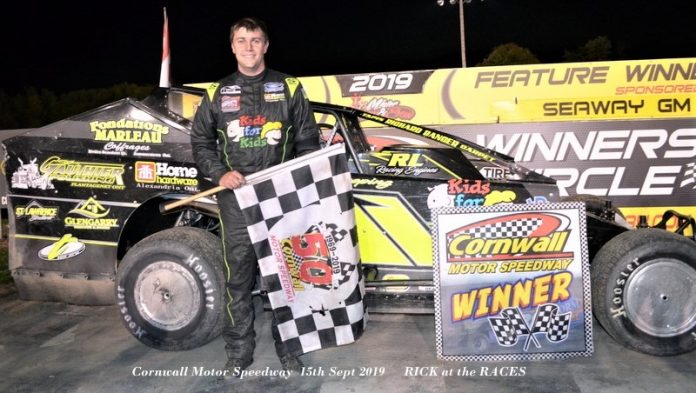 CORNWALL, ONT – It was the final night th 2019 season at Cornwall Motor Speedway with the remake features from September 1st. Seaway GM was the main sponsor for this final night.

Chris Raabe and Brianna Ladouceur led the way in the Fat Les Chip Stand Canadian Nationals 125-lap feature as Brianna Ladouceur took the lead over Raabe and Ryan Arbuthnot with Carey Terrance and Tim Fuller the top 5. Raabe used the outside lane to pass Ladouceur on lap 10 for the lead. The first caution came on lap 18 for Brian McDonald. Raabe to the lead with Arbuthnot moving to second and Terrance in third. Raabe was quick on top as Mario Clair cracked the top 5 with 25 laps in the books. Terrance moved up to second as Lee Ladouceur and Kevin Hamel got together in turn 3 on lap 32. Raabe the leader with Terrance and Steve Bernier now in contention running in third spot with 40 laps in the books. While Raabe was pulling away battle was strong between Terrance and Fuller for the second spot, Fuller inched closer to the leader at halfway point with Raabe resisting in front. Fuller took the lead on lap 70 and led the way until the competition caution on lap 75.

On the restart, Fuller pulled away from Raabe and Bernier with Terrance and Arbuthnot holding on the front 5 positions. Fuller got into heavy traffic at lap 90. As the feature picked up momentum, Fuller kept distance from Raabe with a lot of changed behind them as lap traffic was a factor with Bernier, Terrance and Mike Maresca joining the top 5 with 15 laps to go. Maresca passed Terrance just before caution on lap 119. On the restart, Raabe had a great jump and took the lead over Fuller as Mario Clair brought the caution on lap 121. Raabe to the lead over Fuller and Maresca. Raabe went to lead the final laps to capture his first win of the season over Fuller and Maresca. Steve Bernier was crowned the 2019 Fat Les Chip Stand Canadian Nationals.

Kurtis Cayer took the lead in the 25-lap Next Level Home Improvement Sportsman feature with Shane Pecore running in second with Jason Rose in third. Pecore used the inside lane and took the lead on lap 8 just before caution lights came out. Pecore in front as a series of caution slowed the pace in the first half of the feature. Pecore was in front with Cayer and Justin Lalancette now running third. A lot of battles behind the leader as Moise Page moved up to second with Cayer now in third. Pecore led the final portion to capture his 9th win of the season breaking the single-track record for the 2019 track champion.

In the 25-lap Alexandria Home Hardware Pro-Stock feature, Rock Aubin jumped to the lead with Dave Bissonnette in second, Aubin was strong in front as caution came on lap 4 with a tangle in turn 4, Tyler Bushey headed to the pits. On the restart, Aubin remained in first as Bissonnette was on his backbumper. Bissonnette passed Aubin in the backstretch on lap 8 for the lead. Caution was out on lap 19 for our 2019 track champion Stephane Lebrun with a flat tire. Bissonnette went on to the lead the final laps and got his third win of the year.

In the 25-lap Tracy Wheeler Assist2Sell Mini-Stock, Yanick Potvin took the lead over Justin Jodoin and Chris James, the first laps went on quickly as Brandon MacMillan brought the caution on lap 6. Potvin remained in front but yellow lights came back for Tyler Lamarche who broke in turn 2 on the following lap. Potvin had company as Mike Gaucher charged in front from his 10th starting position and took the lead for a few laps when Potvin regained the lead. Potvin crossed the finish line first but a few disqualifications for rough riding and light at the scale and Mike Gaucher was declared the feature winner.

One final event remains at the speedway with the Monster Truck event on Saturday, September 28 at 2:30pm. The Lavergne family would like to thank everyone for their support during a great 2019 season at the Cornwall Motor Speedway.