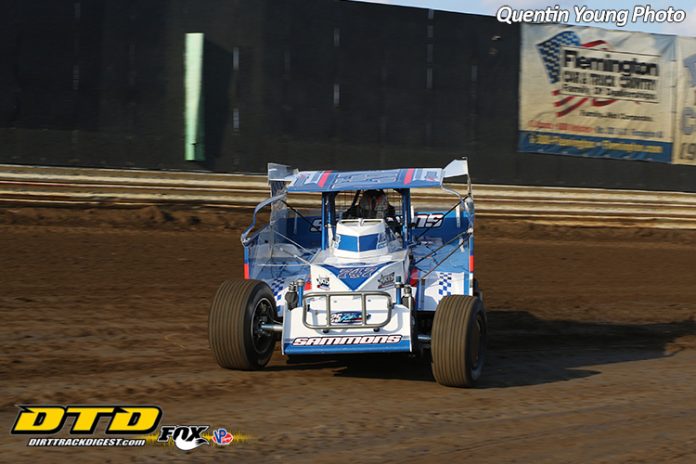 Sammons would jump back out to the lead on the ensuing restart with Kessler in tow. The second caution of the event would fly on lap ten when Kevin Vaclavicek, Dominick Buffalino and Blaine Bracelin got together in turn four. Sammons would again take command of the field on the restart. Brandon Grosso would take over the runner-up spot from Kessler after starting 10th on lap 13. The only slight hiccup that Sammons would have would be on lap 15 when his right side sail panel came loose and folded over which would not phase him one bit as he continued to set a torrid pace. Billy Pauch Jr. who started 12th would now be in the third position as him and Grosso battled for second while they chased after Sammons. 2018 track champion David VanHorn had now raced up from his 13th starting spot while him and Mike Butler put on a crowd-pleasing duel running side by side for the fourth position lap after lap toward the end of the event. They would all be no match for Sammons and he would lead wire-to-wire scoring his third Vahlco Wheels Modified main event of 2019 at New Egypt Speedway. Brandon Grosso would come home second with Billy Pauch Jr. third, David VanHorn fourth, and Mike Butler completing the top five.

“Two weeks ago we changed something on the car and had a motor issue, we got everything back in time for last week and found out we had a bent valve. So, we found something and it took us two weeks to run it. I drove as hard as I could. The track was really fun, I’ve won races where I had to run the bottom and it’s nice to win one where you have to get up on the wheel. We fought for this and we’re just happy to be here”, said Sammons post race.

After clinching the 2019 Vahlco Wheels Modified title the week prior, Billy Pauch Jr. was officially crowned champion this week, for Pauch Jr. it is his second championship in three years and four straight seasons where he hasn’t finished worse than second in points.

“It was a tough and challenging year, we really got going there. We really wanted to win tonight but hats off to Davey (Sammons), Our guys are awesome, this means a lot, I grew up here as a kid, we’ve had a good couple of years here and we have a lot of fun”, Pauch Jr. said following the race.

Robbie Holzwarth scored his second Crate Modified win of 2019 and the second of his career over Ryan Heim, Sammy Martz Jr., Matt Miller and Johnny Bangs. The point battle is closer than ever with Joe Toth leading Johnny Bangs by just two points and Ryan Simmons 10 out of the lead in third heading into next week’s final points race. The Crate Modified results are currently unofficial.

New Egypt Speedway is back in action next Saturday night when Hammer Electric presents Championship Night along with ¼ Midget Night. Track champions in the Larry’s Hot Rods & Harley’s Northeast Wingless Sprint Cars, Hammer Sportsman, Crate Modifieds, Street Stocks and the Mike’s Performance Center 4-Cylinders will all be crowned. Also all area ¼ Midget Racers are invited to put their cars on display and take part in our ¼ Midget parade during intermission.