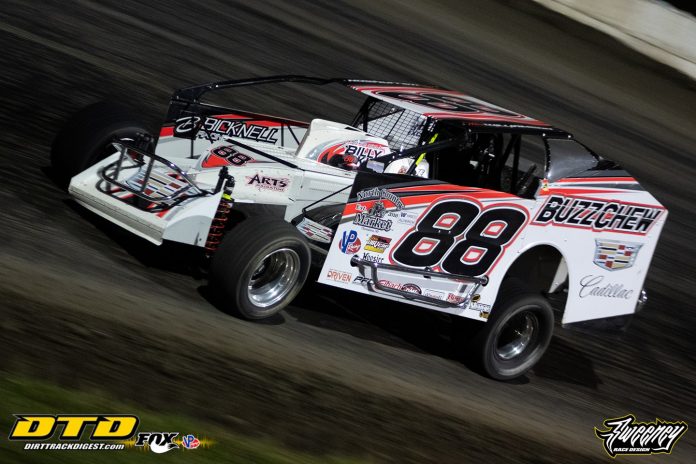 HOGANSBURG, NY – Mat Williamson made a daring race-winning pass overtaking Billy Dunn and Matt Sheppard to win at Mohawk International Raceway. Williamson went into this weekend without a single Super DIRTcar Series win in 2019 but now he will wake up on Sunday morning with two. The Mohawk win is worth $10,000 as well as a guaranteed start in the Billy Whittaker Cars 200 at NAPA Super DIRT Week XLVIII. Billy Dunn maintained second and Matt Sheppard settled for third.

Demetrios Drellos, in his black and white No. 111, brought the field to the green flag alongside Erick Rudolph. Drellos led the early stages but slipped up and over the cushion allowing Billy Dunn to inherit the lead. Dunn, Sheppard, and Williamson were locked in a battle when a lapped car forced the leaders to change their racing lines. Suddenly the No. 88 drove high and whipped by Dunn and Sheppard for the lead.

Mat Williamson is a force to be reckoned with in the Super DIRTcar Series and this weekend is proof positive of that. Friday night he took the win in the Duel at the Demon 100 at Brewerton Speedway and tonight he walks away with $10,000 and a Billy Whittaker Cars 200 guaranteed start.

“We’ve got a really good car. It was the same thing as last night. We were fortunate with the starting position [fourth both nights]. I dropped back there at the start and I was like, “Man if we don’t get up there before it rubbers we’ll be in trouble.” I think I was back as far as eighth and had to come back up. I made a Bonzai move going into three and four to get around Billy [Dunn]. With the rubber down, it made it challenging at the end. Fortunately, we were up front.”

At the halfway point Williamson took the No. 88 around the outside for a stunning pass on then-leader Billy Dunn.

“It was a Bonzai move to get around him and he got checked up by a lapped car. He’s great to race with and I’m surprised he didn’t give me any shots in the bumper at the end,” Williamson said with a chuckle. It takes a great team to get on a roll in the Super DIRTcar Series.

“I can’t thank Buzz Chew enough. Spot, Ernie, and Dan, they work on the car every week. My guys came with me tonight and worked their tails off in the pit area,” he said, proudly looking at his crew.

Runner-up Billy Dunn had a strong night in his Graham Racing machine. A bobble while working around lapped traffic cost him the win but he is happy with the direction of his racing program.

“This Graham Racing car was really good. We made some petty big changes after the Heat Race. We got it dialed in so we could drive to the front before it rubbered.”

Battles were intense all over the track, especially in the first half of the race. Unfortunately for Dunn, a lapped car unintentionally changed the dynamics of the race for the win.

“Sometimes that’s the way it goes. Lapped traffic didn’t get out of the way but hey they are racing too,” said Dunn.

“Two seconds in these cars that I haven’t run much. I gotta thank Ray Graham for the opportunity and my crew guys. They worked their tails off and hopefully, we can build some momentum for the end of the year.”

Defending Series Champion Matt Sheppard showed off once again why he is a champion. The No. 9s is always there at the end.

“We didn’t get a very good start and dropped back a little bit. We passed a lot of cars and got up here with the leaders,” noted Sheppard.

Tricky track conditions made strategic decisions very difficult but for Sheppard, the whole race came down to this lap-forty moment:

“I was about a half a car length short of beating Mat [Williamson] to the rubber down there out of one and two at about lap 40. I would have never dreamed that that would be the difference between first and third tonight.”

Larry Wight picked up the Billy Whittaker Cars Fast-Time Award after setting the quickest lap out of the thirty-five car field. Wight and his Gypsum Racing teammate Billy Decker both finished the night with top tens.

In the Dig Safely NY 811 Redraw Mike Mahaney drew number 12 out of 12 possible starting positions. For that, he is granted one free tire courtesy of Hoosier Racing Tire.

The Super DIRTcar Series is back at it again next Saturday, September 21 for another $10,000-to-win NAPA Super DIRT Week XLVIII qualifier.