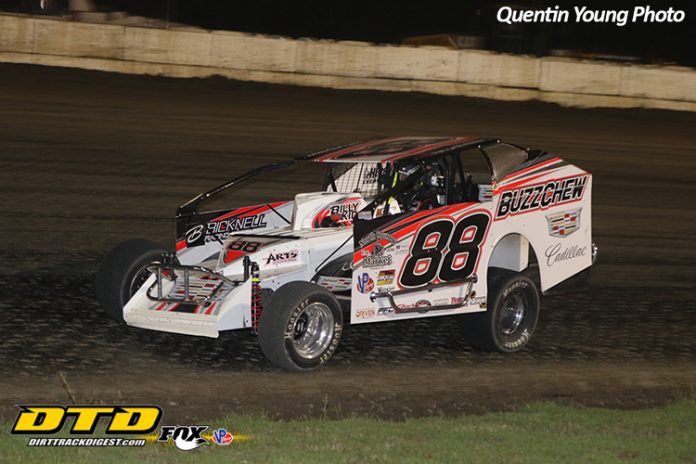 After allowing the weekend to settle in my mind I decided to bring you up to speed on some of the things I’ve been up to since the last column I wrote. After the final point shows at Brewerton and Fulton I had a weekend off from chaplain duties at my weekly tracks. My wife and I took advantage of that time to bring a couple from our church up to Old Forge for an overnight getaway. The wife in that couple is battling cancer and we wanted to bless them with some time away from home. Escaping the normal routine can bring a persons perspectives to a new place of faith for the fight against such a vicious disease.

While we were there we drove up to Inlet for some lunch. I wasn’t aware that the Buzz Chew Chevrolet race shop was located there until later that night. While we were enjoying some pizza and wings a man interrupted and asked if I wrote for DTD because he saw me in one of the hoodies that I wear to represent this site.

As we struck up a conversation he told me his son is a 410 Sprint Car driver from PA, and they were taking the weekend off for a family wedding. The husband we brought with us is an avid 410 Sprint fan so he really enjoyed talking racing with them. Later that night we stopped at a convenience store for a few things and I noticed a poster size picture of the Buzz Chew 88 piloted by Mat Williamson hanging by the coffee bar. The owner told me he’s one of the the team’s sponsors and had high hopes for Mat’s efforts on the tour with the Buzz Chew Chevrolet 88 DIRTcar big-block Modified.

Fast forward to the beginning of the next weekend. The Super DIRTcar Series came to Brewerton for a 100 lap tour show. Behind the scenes a lot of people I spoke to we’re expecting Matt Sheppard to dominate because of his history and multiple championships at the ‘D-Shaped Dirt Demon.’ Throughout the event Sheppard was in cruise control working his way to fourth place, but other than one short-lived run in third place near the end of the race Sheppard didn’t go further forward and finished in fourth.

Larry Wight and Sheppard put on a show for several of the closing laps battling for spots in lapped traffic, while Chris Hile worked his way into second place.

The upset of the night was by Williamson who drove flawlessly all night after taking over the lead. His Buzz Chew Chevrolet 88 car was hooked up on the top of the speedway, shotgunning to the lead on every restart, and outrunning the stellar field of Super DIRTcar Series teams for the win. Williamson went on to pull the “sweep” by winning again on Saturday night at the next series race.

Saturday I kept a seven year old promise to attend a race (once I had a Saturday off) at Square Deal Riders Club in Harpursville, N.Y. Yes, it took seven years to find a night that didn’t overlap our former quarter midget and micro sprint racing schedule, or Fulton’s schedule. I had a blast watching several classes of flat track motorcycle riders compete on their final night of the year. I was able to catch up with friends, make a few new ones, and led opening ceremonies with an invocation. If you’ve never been to a flat track motorcycle race that would be the place to see your first. Mike Williams does a phenomenal job prepping and maintaining the track throughout the night. Mike is former Mod Lite and current Sportsman driver Lisa William’s husband. I had the privilege of joining them together in marriage at the same track seven years ago.

While I was in the mountains enjoying our time with friends, talking racing briefly with people involved in the sport, and relaxing, I was constantly reminded of God’s faithfulness.

“Therefore know that the Lord your God, He is God, the faithful God who keeps covenant and mercy for a thousand generations with those who love Him and keep His commandments;
Deuteronomy 7:9 NKJV”

The vistas from the top of McCauley Mountain Ski resort, the winding roads dwarfed by the landscape, the endless lakes, and the people I met along the way all revealed something about God’s nature everywhere looked. He is faithful. He is always present.

He cherishes His church like a groom cherishes his bride.

“that He might present her to Himself a glorious church, not having spot or wrinkle or any such thing, but that she should be holy and without blemish. For no one ever hated his own flesh, but nourishes and cherishes it, just as the Lord does the church.
Ephesians 5:27‭, ‬29 NKJV”

You don’t have to look too far to find Him when you decide you need Him. I’ve found that most people wait to reach out to Him when they’re feeling trapped in a consequence of life, and God is even okay with that as long as you’re sincere when you call out ro Him.

“Then you will call upon Me and go and pray to Me, and I will listen to you. And you will seek Me and find Me, when you search for Me with all your heart. I will be found by you, says the Lord , and I will bring you back from your captivity;
Jeremiah 29:12‭-‬14a NKJV”

Notice that God’s instructions on how to find Him begin with a prayer, followed by searching your heart and offering it completely to Him? That’s because everything experienced through love, or a loving relationship begins within your heart. God is more interested in personal sincere relationships that any amount of religious ritual mankind can think up.

He created us to connect with our heart. Way back in Eden God walked with Adam in the cool of the day, building a relationship that would allow Adam and Eve to partner with God to have dominion over His creation. They were deceived into breaking that covenant, but Jesus Christ became the perfect sacrifice to establish a better covenant built on better promises.

If you want to know more about the promises of God given to us in the New Covenant we’re here for you. Just email is at flchaplain@windstream.net or message us on Facebook at Finish Line Chaplain. I’ll see everyone at Outlaw Weekend at Fulton Speedway on Friday October 4th and Saturday October 5th. Until then, we’re believing for God’s very best blessings to flow into your life.