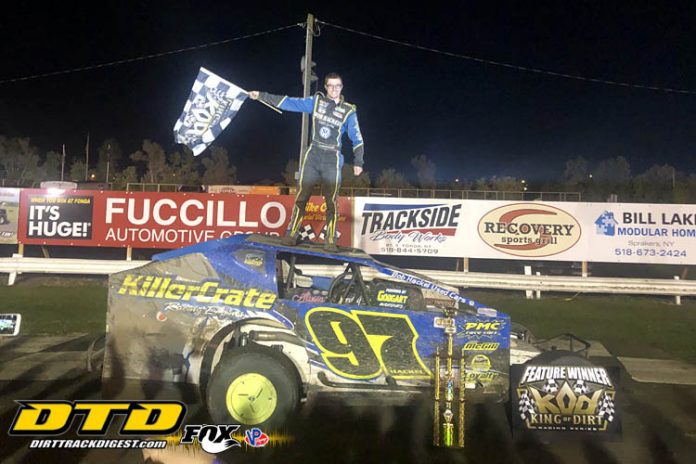 Friday evening it was back to our 2019 Friday night track.  When you spend a whole season at any track you develop relationships with so many of the competitors and fans and that’s the case at Albany-Saratoga. A few weeks ago we met a young lady, Allana Jordan in the Four Cylinder division and she was leading the points and battling to win her first title.  Going into the final point show on Friday Allana was leading Robert Gamey by a mere four points so the pressure was on.  The 17-year-old drove with much caution hoping for that first championship.  She started 13th and when the checker fell finished the event in second and took the title.  We congratulate her on her title and wish her well, she has a great future in our sport.

The pits at Malta filled with 117 cars, the big-block Mods, Pro Stocks had the night off so the 358 Mods were the headline division and were joined by the Junior and Senior Slingshots.  The 358 Mod feature was dominated by Jessey Mueller and his DKM Chassis.  Jessey started on the pole and for much of the race had Brett Hearn chasing him and at the finish he had visitor Anthony Perrego trying his best to steal his lead.  Jessey won a big-block show in May and now has two wins at the Great Race Place. Walking through the pits we met up with a few familiar faces.  We snapped a photo of these four, the history and future of our sport, 60 year fan, brother, Rich Biittig, rookie Limited Sportsman driver, Montgomery Tremont, veteran driver, Kenny Tremont, Jr., and Melissa Lazzaro, daughter of the legendary, Lou Lazzaro.  Melissa is currently doing duty as a member of the announcing team at Fonda Speedway this season.  Melissa has certainly come into her own behind the mic and after watching the MAVTV production of the Firecracker 50 from Fonda it cements how far she has come in a place that her dad help make famous. Bob James (BOBCO video) has been around racing for many years and has provided fans, drivers and the media with his video expertise and dedication to the sport.  Bob is currently going through some serious health issues and on Thursday night as part of  Malta Madness Weekend at Albany Saratoga there will be a raffle to help defray some of his medical costs.

Fonda was back in action on Saturday night with a Sunoco Modified 30-lap event paying $4000 to win and the King of Dirt (KOD) 10th Annual Northeast Cate Nationals, 50-laps paying $2000 to win.  Also on the card was the CRSA sprints, Pro Stocks, Street Stocks, Four Cylinders and Mohawk Valley Vintage Dirt Modifieds (MVVDM). Mike Bruno brought his KOD series to Fonda and along with it several visiting competitors.  One, Vince Quenneville, Jr. who said it was only his second time at the track and that he would probably have to use his point leader provisional and he was correct because he drew a bad number for qualifying events and started the consolation in the rear.  He finished the event in 16th. Another visitor at Fonda on Saturday, but not for the KOD series, was Neal Stratton in his familiar No. 87 Modified.  It was Neal’s first time at the track in a Modified and when we spoke with him after warm ups he said he wished he could get a few more laps. Neal is a hands on, second generation competitor and he was busy working on his car as we spoke.  Neal had been to Fonda once before in the KOD small-block series. As the KOD event was getting ready to take to the track on Saturday a small rain shower hit the Track of Champions putting down just enough moisture to make for a very fast race track.  However, it caused a delay in the program but fans patiently waited out the running in of the track to see a fantastic 50-laps of racing.  Fonda’s 2019 602 Sportsman Champion, Tim Hartman, Jr., took home the win in the KOD event with JaMike Sowle getting second and Brian Borst with the final podium finish.  The KOD Series crowned their champion on Saturday and Bobby Hackel, IV took home his first title in the series. Saturday was proof that two promoters can come together to benefit drivers, owners and fans.  Mike Bruno brought his KOD series to Brett Deyo’s Fonda Speedway and the result was 42-cars strong and some great racing for the fans.

The MVVDM were in the house at Fonda on Saturday and crowned their champions for the season.  Hall of Fame driver, C. D. Coville was also on hand to draw the winning name in the rocking chair raffle donated by Al Kugler and custom painted by “Custom” Bob Niemietz.  John Wentworth of Bleecker was the winner of the customized chair.  Laurie Fallis of the MVVDM presented Fonda promoter, Brett Deyo with a special plaque to thank him for his support of the organization and letting the group race at Fonda on many occasions this season.  They will return for Fonda 200 weekend.

Hope to see many of you at Malta this weekend and the Fonda 200 a week later.