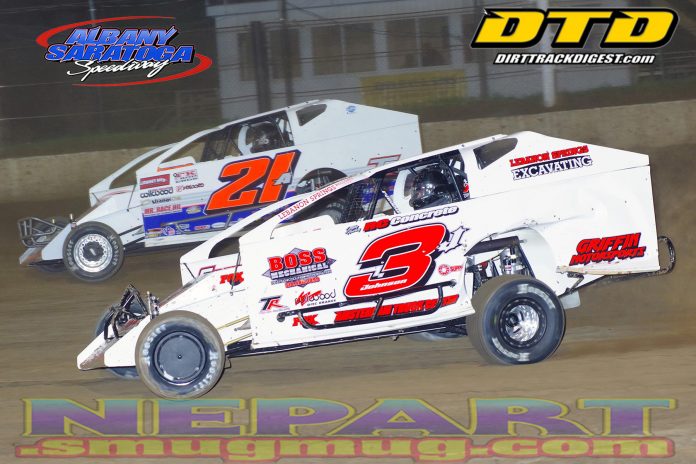 MALTA, NY – As the Super DIRTcar Series gears up for the NAPA Auto Parts Super DIRT Week Billy Whittaker Cars 200, there is one final piece of business outstanding — the final guaranteed starting spot, which goes to the winner of Saturday’s $10,000-to-win Feature at Albany-Saratoga Speedway.

This race was not initially slated to be a NAPA Super DIRT Week qualifier, but the excitement of the high stakes races was enough for Albany-Saratoga Speedway officials to bump up the huge finale to their “Massive Malta Weekend” to make it a $10,000-to-win. Teams should note that the event also pays $1,000 for 10th and $500 just to take the green flag!

Earlier this season, the Series raced on the famous eastern New York dirt track, where Stewart Friesen edged out Brett Hearn for the guaranteed start and $11,111 in The Big Show XI. Race fans have come to expect nothing less than specular wheel-to-wheel racing at Albany-Saratoga.

While Matt Sheppard has a strong lead on his fellow Super DIRTcar Series stars, it is not insurmountable, especially with the premier Series race teams gunning for the top spot behind him including Mat Williamson, Erick Rudolph, Larry Wight, Billy Decker and Jimmy Phelps.

Peter Britten, Mike Mahaney and Demetrios Drellos have many laps around the Malta oval and should not be counted out.

Home track hero and 900-plus-win Big Block Modified superstar Brett ‘The Jet’ Hearn was the runner up in his own Big Show back in June. The famous No. 20 will be looking for retribution on Saturday night.

Albany-Saratoga regulars like 2019 Track Champion Marc Johnson, Matt Delorenzo in the No. 3D, Mr. DIRT Track USA Champion Kenny Tremont Jr., and many more will be on hand to battle the Series stars.