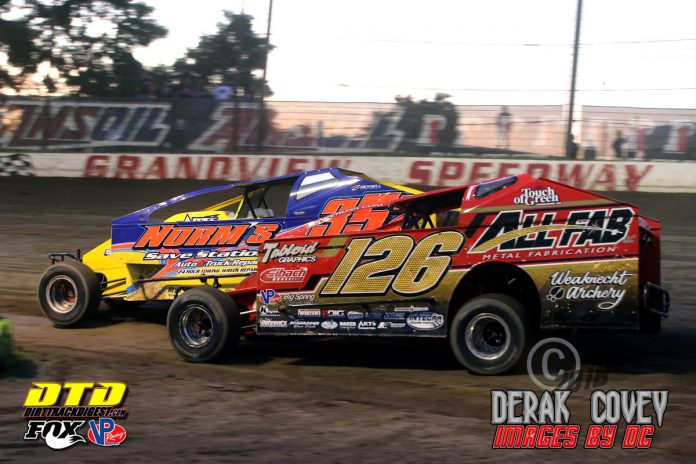 BECHTELSVILLE, PA – The biggest stock car racing event of the season at Grandview Speedway, the 49th Annual Freedom 76, is set for Saturday, September 21st. More than $25,000 is being offered to the winner of what has become the “Granddaddy” of area Modified stock car racing classics. The action gets the green at 7 p.m. A September 28th rain date is in place.

Duane Howard, the new track Modified champion and defending champion of this event, is being touted as a favorite to win. He is a five time winner of the Classic. Other past winners expected to be entered include Craig Von Dohren, the all-time leading feature winner at the Bechtelsville clay oval. And there will be Jeff Strunk, a seven time winner, Brett Kressley, past winner Ray Swinehart, along with three time winner Meme DeSantis, Mike Gular, Doug Manmiller, and quite possibly six time winner Billy Pauch Sr. and Jr. along with NASCAR Truck Series standout Stewart Friesen.

Of course the 49th version of the Freedom 76 will also attract many of the top names in the sport as visiting talents along with a large field of Grandview regulars. You just never know who might show up to try for the $25,000 plus winner’s money.

And on Friday, September 20th the Mid Atlantic Sprint Series along with the Sportsman racers will be in action in the doubleheader Freedom 38. Modifieds entered in the Freedom 76 will be permitted some practice laps as part of the Friday night racing action. Heading up the popular sprint car racing action will be such talents as Tim Tanner Jr., Jon Haegele, Jeff Geiges, Ryan Stillwagon, and a long list of others.

Bobby Gunther Walsh and his sponsors have added some excitement by posting $500 for the Hard Charger in the 76 lap race that will this year have no mandatory fuel stop.

Top performers during the Saturday night qualifying will take part in a Cash Dash paying $1,000 to win.

Adult admission for the Freedom 76 is $40 but advance tickets are available up to and including September 20th and they are priced at $35. Youngsters 6 thru 11 pay $10 and kids under 6 are admitted free.

Advance ticket holders are admitted at 3 p.m. while the general admission gates will be open at 3:30 p.m.

Between 3:35 p.m. and 4:30 p.m. Duane Howard and Brad Brightbill will be meeting fans and signing autographs at the SDS Photo booth.

There is no license required for the Friday and Saturday stock car racing events.

Admission for the Friday, September 20th, Sprint and Sportsman doubleheader, is $12 for adults, $5 for youngsters 6 thru 11 and under 6 are admitted free. Pit admission is $35. Racing gets the green at 7:30 p.m.

The Freedom 76 has a September 28 rain date while the Friday night event offers no rain date.

Full details on camping, parking, seating and more is available at www.grandviewspeedway.com at the Freedom 76 link. Rules for the race and entry blanks are also available at the same location. Those with campers on the speedway grounds are reminded that the campers must be removed the day following the Freedom 76.

Brad Brightbill earned his first title in the T.P.Truck Equipment Sportsman division getting 4172 points. Second spot was taken by past champion Brian Hirthler with 3796 points. Third spot went to Brad Grim who had tallied 3670 points. Fourth went to Brad Arnold with 3551 followed by fifth place finisher Kyle Lilick with 3541 counters. Sportsman raced in 20 races during the season with 55 racers earning points.