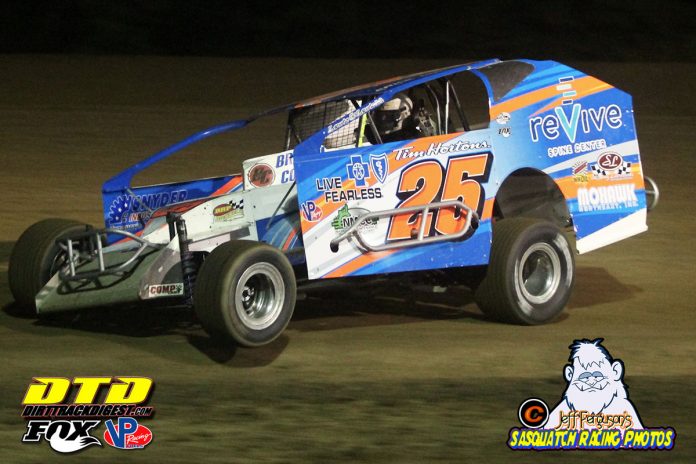 MALTA, NY – If Erick Rudolph needs a nickname, “Showtime” would be appropriate.

Rudolph kept the Albany-Saratoga Speedway crowd on the edge of their seats with an amazing heat race performance, and then came back and made a stunning pass on 2019 track champion Marc Johnson on the white flag lap to win Friday night’s Tom Clothier Trucking Suicide Prevention Awareness 40-lap small block modified feature.

Rudolph’s first career win at Albany-Saratoga, which put $4,000 into his pocket, highlighted Day 2 of “Malta Massive Weekend.” Saturday’s finale will feature a 100-lap Super DIRT Series race, which will pay $10,000 to win and offer a guaranteed starting spot in the Billy Whittaker Cars 200 at Oswego.

Friday night’s 40-lap feature was Johnson’s to win. By virtue of the heads-up start, he started on the outside of the front row, and after Don Ronca set the pace for seven laps, Johnson took over.

Just two laps after getting the lead, Johnson avoided disaster when he nearly hit the car of Glenn Forward, which was slowing to get into the pits. But Johnson never made contact, and set sail.

But then things started to change. The first yellow of the race came out on lap 29, when Pat Ward slowed on the front stretch. That erased Johnson’s big lead and put Warner next to Johnson, with Wight third and Rudolph, who had started ninth, fourth.

Another quick yellow came out for Peter Britten, who had suffered a flat right front tire, but with nine laps to go, Johnson was still in control, with Warner still second and Rudolph now third.

On the next restart, Rudolph moved to the high side of the speedway, and on lap 33, dusted off Warner for second and quickly pulled up on Johnson’s rear bumper. Rudolph was running high through the third and fourth turns, building up momentum, but Johnson seemed to be using his home track advantage, getting through the first and second turns quicker to stay out front.

On lap 37, Rudolph ducked to the inside and tried to squeeze inside Johnson coming through three and four, but Johnson slammed the door, with the two making contact coming out of the fourth turn.

But that didn’t slow Rudolph. He went right back to the top, pulled even going down the backstretch on lap 39 and had the lead as the two cars passed starter Rich Peterson’s white flag.

When they hit the finish line about 16 seconds later, Rudolph had his first career win at Albany-Saratoga by 0.441 seconds.

“It seemed like a lot of people were running the bottom, and they seemed to beat up the track quite a bit,” said Rudolph after the win. “The top came in, and I was lucky that I was the first one to get up there.”

Following Rudolph and Johnson across the finish line were Warner, Wight and Mike Mahaney.

Earlier in the night, Rudolph started last in his heat race, but put on a clinic, coming from 11th to finish third in 10 laps and get into the redraw.

“In the heat race, I drew the worst pill possible, but the heat went good,” Rudolph said. “Then we had practice, and I learned a little from that, and just fine-tuned in for the main event.”

Prior to the feature, there was a draw for positions for the Andy’s Service Pick-5, with the drivers who finished in the designated spots getting a $200 bonus. The bonuses went to Ronnie Johnson (ninth), Matt Pupello (17th), Randy Green (18th), Rob Pitcher (22nd) and Ricky Davis (24th).

There were also $200 bonuses for each heat race winner, courtesy of Dave Prime Jr. of Mac Tools. Those bonuses went to Don Ronca, Marc Johnson, Justin Barber and Jessey Mueller.

An optional big block modified timing session was held for cars that will be participating in Saturday’s Super DIRT Series race, with the driver with the fastest average time for two runs getting a $500 bonus from Ron Mensing and his Native Pride initiative. That bonus went to Wight.

Tim Hartman Jr. dominated the 30-lap Dave’s Electrical Service Series sportsman race, which paid $1,000 to win. Hartman started fourth, took the lead away from polesitter Kale Groff on lap nine and stayed out front the rest of the way, picking up his fifth win of the year. Groff finished second, with Brian Calabrese crossing the finish line third.

“It was beneficial to start in the second row,” said Hartman Jr., the 2018 sportsman champion at the Malta track. “You can see what the other guys are doing. You can be patient and see what you have to do.”

Randy Miller held off longtime rival Al Relyea in the 20-lap Lake Auto Parts street stock feature. Miller started third and went right to the front. Relyea, who started right behind Miller, used a restart on lap seven to move into second, and was never more than two car lengths back the rest of the way, but had to settle for the runner-up spot while Miller picked up his fourth win of the season.

David Frame, the 2019 dual cam four-cylinder champion, had one of his best runs of the season Friday, passing Josh Kane for the lead on lap 12 to win the 15-lap four-cylinder feature. Jaxson Ryan had the lead until he ran into mechanical problems on lap nine, coming to a stop in the second turn and giving the lead to Kane.

The Mohawk Valley Vintage Dirt Modified series also was part of “Malta Massive Weekend.” John Flach Jr. won the replica feature, just as he did earlier in the year, while Mike Cole won the classic division.