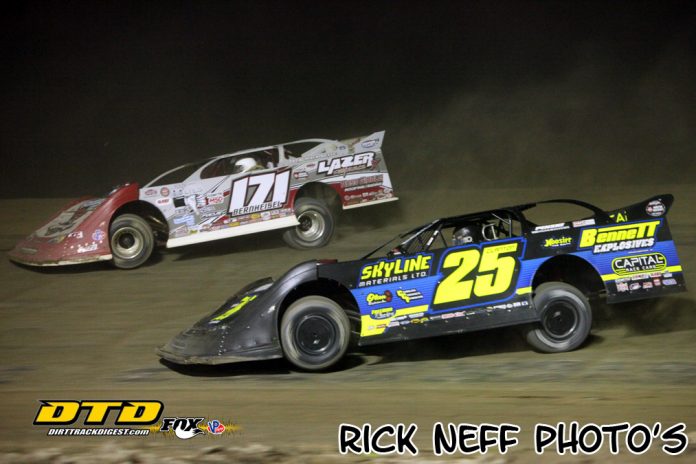 DUNDEE, NY – Since the driver change just over three months ago, Skyline Motorsports has really turned their season around with veteran pilot Shane Clanton behind the wheel of the #25 Capital Race Car.

Outrunning the record-chasing Brandon Sheppard for the third time this season, Clanton kept his cool on a restart with three laps to go and drove away from the Rocket1 Racing driver to claim his fourth World of Outlaws Morton Buildings Late Model Series Feature win of 2019 in the second-ever visit to Outlaw Speedway.

“We’ve been working really hard to get what we’ve got tonight,” Clanton said after the race. “Hopefully, we can carry this momentum through the rest of the year.”

“The Georgia Bulldog” made it look easy, taking a clean sweep of the night by setting quick time in Qualifying, winning his Drydene Heat Race and redrawing the outside pole before taking off on the first lap and opening up a sizeable advantage over Sheppard.

Clanton’s quick lap times and Outlaw’s quarter-mile size allowed the Zebulon, GA-native to catch the rear of the field within the first 10 laps. He made quick work of the first several lapped cars in line while still maintaining his 2.5-second advantage out front.

“I could go wherever I wanted to. The top, the bottom, it didn’t matter. Wherever they were at, I was able to go where they weren’t,” Clanton said. “That’s what it takes to get through traffic. Our car is really balanced right now, hopefully we can keep it up.”

But soon, Sheppard began to crack the whip a little harder, making up almost a full second by the time the race’s first caution flag flew on lap 29. This erased Clanton’s lead and put “The Rocket Shepp” right on his rear bumper for the first restart, which he expertly handled.

Four more yellow flags were thrown before the end of the race, which gave Sheppard, still vying for his record-breaking 19th Morton Buildings Feature win of the year, several chances to swipe at the lead. But Clanton was simply not going to be denied, and he only received a few looks to his inside for the lead. Including one from Chase Junghans, who had a strong first restart and grabbed the second spot from Sheppard before relinquishing on a restart six laps later.

“I restarted on the outside of Sheppard and got by him, and thought ‘heck, I should do that again.’” Junghans said. “But on the next one, he got back by me.”

Sheppard shot around Junghans’ outside to take the runner-up spot back, which he held through the final stage of the race to collect his 33rd top-five finish in 35 races. Overall, a solid night for the Rocket Chassis team, but Sheppard felt like he needed a few more long stretches of green-flag laps in order to catch Clanton and have a shot at the lead.

“I could make up time on that last long run, but when we got a yellow with three to go, it took me a few laps to get rolling,” Sheppard said. “I needed Shane to get away from me a little bit so I could get some clean air and get my rhythm back.”

He ran most of the race in the bottom lane, where he was able to make up ground after the restarts.

“That one groove we were in was the fastest way around,” Sheppard said. “You could move all over in lapped traffic, but the line we were in at the end looked to be the fastest.”

While leader Clanton was dealing with the pressure from behind him, Sheppard was keeping a conscious eye towards staying in his groove to avoid rapid tire wear, which some other teams struggled with over the course of 50 laps. That also factored into his decision to stay on the bottom.

“I was definitely trying not to wheelspin too hard, but whenever you get up into the cushion, that’s all you can do it wheelspin. It was just one of those deals where you’ve got to hope it doesn’t happen to you,” Sheppard said.

As for Junghans’ night, he and the ShopQuik team are very proud of their podium finish. Junghans said it’s been a challenging last few starts but can feel the steady progress being made.

“I think we’re going in the right direction. We’ve been struggling a little bit in the past four or five races. But we never give up, so hopefully we can carry the momentum over into tomorrow and finish the weekend strong,” Junghans said.

After riding third in Series points behind leading Rookie of the Year contender Ricky Weiss for several weeks, Clanton grabbed sole ownership of second place in overall points with the win on Friday night. As most drivers’ attitudes are towards points standings, Clanton isn’t exactly keeping score after every race, but knows the win did reward him in the standings department and is still hungry for more.

“If we keep winning these races, the points will take care of themselves,” Clanton said. “It is what it is with these points, we made our bed and now we’re going to lay in it. Hopefully, the rest of the year we’ll do good and win some more races.”

With respect to the finishing order, it was a great night to be an Outlaw at Outlaw Speedway. Seven of the top-10 spots were claimed by full-time World of Outlaws drivers, just one night after the Northeast locals had claimed three of the top five spots in the visit to Stateline Speedway.

And for the second night in-a-row, Sheppard and Rocket1 will have to wait yet another day to make history, in search of that record-breaking 19th Feature win in a single season. Regardless, he and the team are having a season for the ages, but that doesn’t mean the rest of the Outlaws are just rolling over.

Can Sheppard capitalize and break the record in the final race in the Northeast for 2019? Find out tonight, as the Outlaws invade Selinsgrove Speedway in Pennsylvania for the 21st annual Late Model National Open presented by Jeff’s Autobody & Recycling Center. Hot Laps go live on DIRTVision at 6:15 p.m. ET!