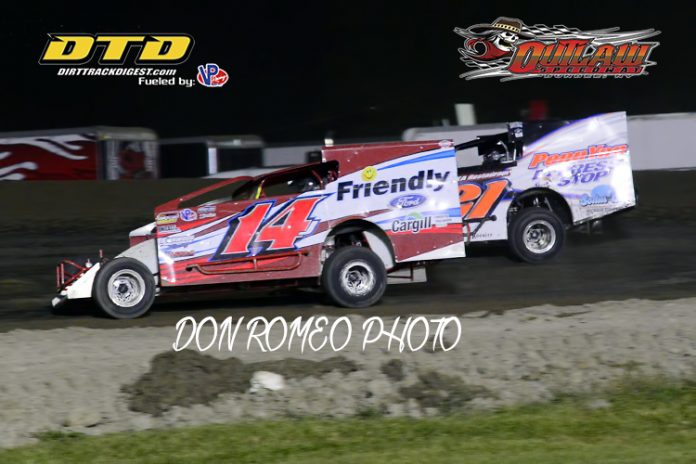 DUNDEE, NY – Joe Trenca took full advantage of his pole position starting position in winning the 30 lap feature and the $5000 that went along with it as 360 Sprint Champion of the 4th Annual Outlaw Speedway Fall Nationals.  By virtue of picking up the Dash win the previous night, Trenca and Jared Zimbardi brought the twenty-four car field to the opening green flag.  Only two yellow flags slowed the pace with the first coming on lap ten and the second and final caution on lap thirteen and in both cases Trenca was not going to be denied a victory in the prestigious Fall Nationals event.  From the opening green and after each restart Trenca was able to open up a comfortable advantage over Zimbardi as both Davey Franek who started ninth on the grid and Paulie Colagiovanni who lined up in fifth were making their move to the front.  Zimbardi, who has had an obvious love affair with Outlaw Speedway over the years winning numerous A Main events along with continual top five finishes had nothing for Trenca and as the laps were winding down had to fight off the challenge of Colagiovanni who was able to get around the Bradford, Pa speedster and set sail for the high flying Trenca.  However, without the help of any additional yellow flags to tighten up the field it was too much of a margin to make up and as they crossed the finish line to complete the 30 lap feature Joe Trenca held a comfortable second and a half advantage as Colagiovanni had to settle for a well-deserved runner up finish.  Zimbardi was able to hold on for third at the end chased across the line by Franek and Matt Farnham who rounded out the top five.

Some thirty-two 360 Sprints were on hand requiring four qualifying heats which were won by Jordan Thomas, Steve Doell, Matt Farnham and Derek Locke.  Denny Peebles won the B-Main as Farnham picked up the Dash victory.

For a more concise wrap up of the 360 Sprint portion of the Fall Nationals simply log on at www.patriotsprinttour.com.

The A. Verdi Storage Containers along with the Lucas ESS 360 Sprints will be back at Outlaw Speedway as part of the 4th Annual Dutch Hoag Weekend in October for a $3000 to win event.

Veteran driver, Alan Johnson has been consistent all season long at Outlaw Speedway.  But, the 2018 Modified Track Champion was shut out of victory lane throughout the regular season and wound up third in the final point tally behind fellow full time racers, Matt Sheppard and Steve Paine.  However, on this night the man better known as AJ Slideways was not going to be held back as he came away victorious in the Gunslinger 50 lap feature and walked away with the winner’s check of 3 grand.

By picking up the win and second place finishes on the pervious nights Dash event, Derrick Podsaidlo and Corey Costa brought the twenty-four car Friendly Chrysler, Dodge, Jeep Ram Modified field to the opening green flag.  Podsaidlo would lead the opening four circuits giving way to Nick Nye after a lap five restart.  Journeyman racer, Nye who started third on the opening green flag would then set the pace for the next thirteen laps, but Podsaidlo would regain the top spot on lap nineteen.  The second and final caution flag would wave on lap twenty-two and on the restart it would be D. Pod again setting the pace, but Alan Johnson was now on his rear bumper.  Johnson, who lined up on the outside of the third starting row very methodically worked his way to the front of the field and as he motored past Podsaidlo to take the lead on lap twenty-nine and from there it was all AJ Slideways as he led the remaining twenty-one laps and cruised to the win by a half straight away ahead of Podsaidlo who came home with his best feature finish of 2019.  Nye, like D.Pod ran in the top three the entire distance came home for third as he was followed across the line by Corey Costa who stayed with the leaders the entire distance.  Hurricane Steve Paine, who started tenth at the opening green flag rounded out the top five finishers after a steady drive.

Thirty-one Modifieds tried to qualify for the feature event with heat wins going to a pair of second generation drivers in Kyle Coffey and Greg Birosh with Steve Paine and Billy Shantel Sr. claiming the other two heat victories.  Scott Landers landed in victory lane winning the consolation event.

For the Sunrise Insulation Outlaw Speedway 602 Crate Sportsman it was yet another event in the season long American Racer Tire Sportsman Series.  With thirty-two Sportsman jammed into the pit area five heat races were required to set the field with wins going to Karl Comfort, Anthony Kimball, Tommy Collins Jr., AJ Lloyd and Dale Welty.  A pair of consolation races were picked up by Travis Green and Dustin Jordan.

2017 Outlaw Speedway Sportsman Track Champion, Karl Comfort and third generation driver, Alex Payne brought the twenty-five car field to the opening green flag as Payne would show the way leading until lap eleven. Tommy Collins was definitely on a mission having lined up inside row two on the original start and by lap twelve he was passed both Payne and Comfort and into the lead, a lead that he would never relinquish.  With only a pair of caution flags to slow the event on laps six and seventeen, Collins was on a rail and once out in front opened up an insurmountable lead and as the double checkers dropped, Tommy Collins Jr. had picked up his third feature win at Outlaw Speedway in 2019 and solidified his point lead over Kenny Hammond in the Outlaw Speedway American Racer Tire Series heading into the season finale in October.

Like Derrick Podsaidlo in the Modifieds, Alex Payne also had by far his best run of the 2019 campaign finishing in second spot as he continues to impress in his first year of full time competition in the Sportsman Class.  Karl Comfort chased Payne across the line for third as 2019 DIRTcar Hoosier Tire Outlaw Speedway Track Champion, Will Shields finished fourth while series contender, Kenny Hammond rounded out the top five.

For the Stan’s No Tubes Street Stock Division it was a tune up for the upcoming Empire 100 to be staged as part of Dutch Hoag Weekend on October 18 and 19, 2019.  Thirty- two of the Classy Street Stocks crowded into the Dundee, NY pit area requiring four qualifying heat races which were won by Adam Depuy, Glen Whritenour, CJ Guererri and Josh Pangrazio.  Veteran racer, Bob Buono moved into the feature event by claiming the consolation win.

One time 2019 feature winner, Aksel Jensen along with Pangrazio brought the field to the opening green flag as a field littered with top notch drivers and equipment were lined up right behind them.  Kurt Stebbins makes very few appearances at the popular Yates County Speedway throughout the season primarily focusing just on Outlaw Speedway special events.  Stebbins was not going to be denied on this night as he lined up ninth on the starting grid, passed a whole bunch of very good cars and walked away with the victory and the $1,000 pay check.  And by his outstanding performance, Stebbins now can lay his claim to the season ending Empire 100 in October.  Six time feature winner this year at Outlaw Speedway, Glenn Whritenour was able to come home with second place at the finish as he was followed across the line by Gene Balmer with Jimmy Grant finishing fourth.  Quinn Sutherland came from deep in the field starting way back in nineteenth, mowed thru the field and rounded out the top five finishers.

Like Alan Johnson in the Mighty FCDJR Modified Division, 2018 Outlaw IMCA Modified Track Champion, Rodney Morgan has keep kept out of victory lane throughout the regular season.  Having played second fiddle to both Rich Michael Jr. and 2019 Track Champ, Brandon Smith on numerous occasions, Morgan has struggled mightily.  However, on a special occasion like the Annual Fall Nationals coupled with a very stout field of some eighteen of the best IMCA Mod pilots in the regions, the very popular Rodney Morgan was not going to be denied on this night as he picked up the feature win in the Marion Decker Insurance IMCA Modified FASTSHAFT feature go.  Morgan started in the fourth row, moved to the front and walked away with the $1000 win as he was chased across the finish line by track invaders Brad Sites, Bill Nichols, Tyler Stoddard and Brenton DeYoung.  Earlier evening heat races were won by Morgan and Brandon Smith.

In the Marion Decker Insurance sponsored Hobby Stock Division a good field of some sixteen full fender machines took the opening green flag.  Justin Eldredge and Tyler Burnell led the field to the opening green flag as they were followed by a host of 2019 feature winners in the class.  Justin Eldredge, who picked up an earlier evening qualifying heat win was not going to be denied his second victory at Outlaw Speedway in 2019 as he was able to hold on and win in the Fall Nationals Classic.  Eldredge was followed across the finish line by Tyler Burnell who was steady throughout.  2018 and 2019 Track Champion, Marc Minutolo came home for third at the finish chased across the line by Jamie Eldredge while Buck Mills Jr. came home for fifth.  In addition to Justin Eldredge, five time 2019 feature winner, Wayne Ellison and 2019 feature winner, Bubba Burnell picked up the remaining two heat wins.

Congratulations to all competitors as over 180 cars were on hand for the night of activity.

Outlaw Speedway will now take a one month vacation as the track management and staff will prepare for the 4th Annual Dutch Hoag Triple 7’s Weekend on October 18 and 19, 2019.

A complete list of all classes that will see competition and on which nights is already posted by going to www.outlawspeedwayllc.com.

Continual updates will be made available on a regular basis as the event draws near and can be found on www.Facebook.com/OutlawSpeedwayLLC/.