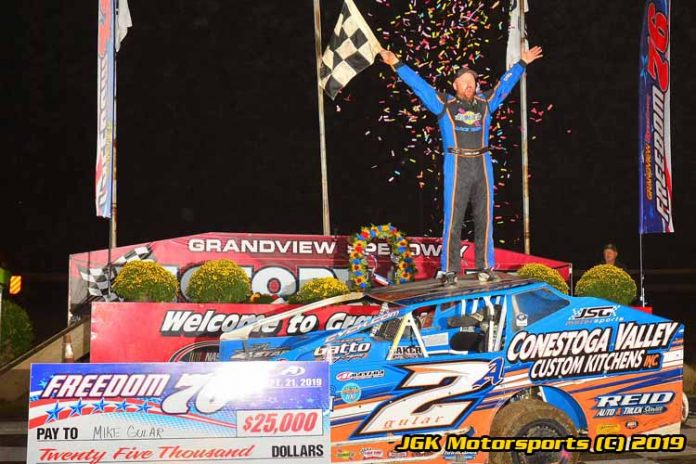 BECHTELSVILLE, PA – Veteran racer Mike Gular returned to his “home track” of Grandview Speedway on Saturday night to participate in the running of the 49th Annual Freedom 76-lap T.P. Trailers 358 Modified feature which netted him $25,000 plus lap money as the winner.

The 2018 defending point champion accomplished the goal he set out to achieve last year which was a point title. The 2019 season saw the Sassamansville, PA speedster venture to other tracks as a learning experience in which he did quite well despite the long haul to New York.

Gular, who started seventh in a field of 31 competitors, moved into third on the fourth lap and made a bold move when Frank Cozze and Rick Laubach running first and second got bottled up behind lap traffic. T.J. Lily broke right at the finish line causing the top three to scramble. Gular saw an opportunity open and shot into the lead just as the yellow came out on the 19th lap. Gular maintained the lead on the restart and held off the challenges of Cozze and later eventual runner-up Laubach on the three restarts needed once he was in front. When the checkered unfurled Gular proved he still knew his way around the 1/3-mile oval and pulled into victory lane for a well-earned triumph. It was a “dream come true” for Gular and the team since it was something he wanted to win for several years.

In addition to monetary awards from T.P. Trailers and product certificates from VP Fuels provided he sported the proper decals, Gular received the Dan’s Deli ½-way hoagie award and a Bob Hilbert Sportswear jacket. Craig Von Dohren, who finished sixth after starting 29th having to get into the field via the Minuteman 20, received $500 from fellow driver Bobby Gunther Walsh and his sponsors as the Hard Charger of the race.

Through the luck of the draw Cozze, a guaranteed starter by finishing second in the Forrest Rogers Memorial a race won by 2019 point champion Duane Howard which also earned him guaranteed position, grabbed the early lead trailed by Laubach, Billy Pauch Jr., Ryan Beltz and Gular.

Beltz, while running fourth, spun into the backstretch infield for the first yellow on the third lap. The previous lap Pauch Jr., third place runner, pulled out of competition. Cozze held onto the lead when action resumed with Laubach trying every which way to get around him.

The top there comprised of Cozze, Laubach and Gular, scrambled on the 19th lap yellow when Lilly broke on the homestretch. Gular saw an opening just before the yellow was thrown to overtake the lead as the trio crossed the line. Second through fifth with Gular at the head of the pack when action went green again was now comprised of Cozze, Jared Umbenhauer, Laubach and defending race winner Howard. Trying to get into the top five was Brett Kressley and he did that on the 30th lap.

By the half-way marker Gular distanced himself from the competition with Cozze, Laubach, Brett Kressley and Umbenhauer in tow having a four-way battle for second. Right in the thick of the action was Doug Manmiller in sixth and by the 56th lap he overtook Kressley for fifth.

Kressley, in sixth, spun in the second turn with a flat tire for the 68th lap yellow, but Gular still maintained the number one position on the restart.

A multi-car tangle between turns three and four brought out the yellow with 69 laps in the books. Gular wasted no time pulling away on the restart as he knew now Laubach, Manmiller, Cozze, Howard and Von Dohren wanted to change the order.

Gular stuck to the bottom trek while Laubach attempted to overtake him running the top lane.

Gular never gave up the lead and went on to claim the biggest win of his career. Chasing him across the line were Laubach, Manmiller, Cozze and Howard. Rounding out the top ten were Von Dohren, Jeff Strunk, Umbenhauer, Mike Lisowski and Bobby Varin.

Howard also picked up an additional $1,000 and a Penske Shocks certificate by winning the 10-lap Cash Dash.

Coming up next at Grandview Speedway is Enduro and Blast from the Past Vintage racing. It all happens on Saturday, September 28th at 6 p.m. and features Big Cars, Small Cars, Junk Yard Cars, Mechanics Race, Xcel 600 Modifieds along with two features for the Vintage racers. A lot of action for just $10 (adults) and youngsters under 12 free.

Then on Saturday, October 19th, 6 p.m. Thunder on the Hill Halloween Party featuring 358/Big Block Modifieds in a 40-lap main event plus Sportsman and MASS Sprinters.