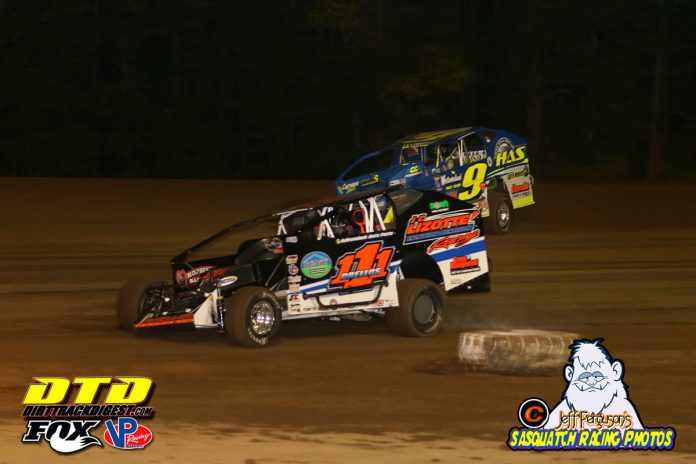 Demetrios Drellos pulled off the surprising upset in Saturday night’s Super DIRTcar Series event at the Albany-Saratoga Speedway.  The 22-year-old driver, in his first year on tour, held off the likes of Matt Sheppard, Larry Wight and Billy Decker in claiming the $10,000 victory.  It was a surprise to everyone in attendance and to the driver of the No. 111 that he eventually ended up victory lane.

“It didn’t take as long as I expected actually, if you me want to be honest,” said Drellos.  “I thought it was going to take a few years.  I guess sometimes you just hit it right and I hit it right real close to home.  The track was perfect for what we setup for.  We expected it to be a medium track and that’s what we went with.  We gambled with the tire and it paid off.”

Drellos, a former regular at Albany-Saratoga, went with a little different setup.  He elected to use a different tire compound than many in field.  That choice, along with a prime starting position on the front row, helped him hold off all challengers throughout the 100 lapper.

“I didn’t come here at all this year, except once for the other Super DIRTcar Series race,” mentioned Drellos.  “I think that actually helped us because every week people would go with the 400 (Hoosier Tire Compound).  I didn’t run the 400 because I ran here three years and never needed one.  I just took a gamble and went with what I know.  It worked out.”

It worked out just a week after he watched a Super DIRTcar Series win slip from his grasp.  Drellos controlled the first half of the series event at Mohawk International Raceway only to be late in finding the rubber on the bottom of the racetrack.  Saturday’s win takes the sting off that finish a bit.

“Mohawk, I love that track,” commented Drellos.  “I ran there every Friday as much as I could.  It helped a lot there.  The problem with that track, I couldn’t see where it took rubber running the top.  I just made one mistake and then I had to get to the bottom.  This definitely, definitely makes up for it.”

Drellos was forced to survive multiple restarts during the race.  On the double-file restarts he elected the outside, which traditionally isn’t the fastest lane, but it worked for him.  He was tested once with single-file restart on lap 91 which ironically had Decker lined up on his back bumper.  It all worked out.

“That was definitely the most stressful one because even on a double-file start, sometimes you can predict how they go,” stated Drellos of the final restart.  “I think earlier in the race Larry (Wight) was on the inside of me and I took top.  I know he likes the top.   If I could take that lane away from him early in the run he couldn’t gain that momentum.  That is a risky thing, taking the top, because no one takes the top here at Malta.  The track seemed perfect for what it was.  We just made it work.”

A result of the win is a guaranteed starting spot at Oswego Speedway in the Billy Whittaker Cars 200.  A locked in spot at Super DIRT Week is a huge boost for him and his team.

“That is a huge weight lifted off my team’s shoulders and my shoulders knowing that we can roll in there and experiment during the practice sessions,” he said.  “We don’t have to worry about getting in, but worrying about how good of a spot we can start.”

Billy Decker hopes that Saturday night’s runner-up finish is a sign that his LJL Racing team has turned a corner.  Decker hasn’t been able to finish up to his standards for much of the summer.  He feels like the team made strides in the pair of events they ran at Albany-Saratoga over the weekend.

“We had a good car and I’m pretty happy,” stated Decker.  “Honestly, we’ve been struggling a little bit and I think we are close.  We were hung in mediocrity there for a while so we keep making changes.  We keep working hard.  We’ve been trying to find something that I like and can race well with.  I think the last two nights, obviously both of them were here, but I think we made a gain.  I don’t want to say too much about it because the next thing you know we’ll suck, but it’s a step in the right direction.”

Decker chased Drellos late hoping for that first series win, but it wasn’t to be as he had to be pleased with second.

“He had a little different tire on then we did,” Decker said of Drellos.  “He took off and we didn’t.  I was trying.  I was running my guts out. I just wasn’t as good as he was.”

Williamson in the Hunt

Mat Williamson kept his hot run going by finishing with another podium finish on Saturday.  Williamson mixed it up late with Decker and Stewart Friesen before settling for third.  He is in the midst of a hot streak as there was some disappointment in his voice that he didn’t get his third consecutive win.

“I just told Buzz you know you are on a good run when you are disappointed with a third place,” mentioned Williamson.  “At the beginning of the year we came here and were ecstatic about it.  It’s a good run for the team.  We’ve been rolling pretty good lately.  When the 9s (Matt Sheppard) starts ahead of you and you pass him, you try to make up as many points as you can.  We are happy with it.  We are on quite a run and hopefully we can keep it rolling.”

Williamson is going to continue to dig in the point standings with the series.  He made sure Friesen didn’t get by him late in the go as he wanted as many points as possible.  He’s closed the gap to Sheppard to just 90 points in the standings.

“I raced Stewy really hard,” cited Williamson.  “We knew this was going to be a night to gain on points.  Every little bit counts.  Hopefully that will pay off at the end of the year and a little bit might matter.  The race track was awesome.  A little too fast for my liking.  I like when you got to slow down and finesse it.  It was elbows up.”

Stewart Friesen continues to adjust to life in his new Bicknell.  Friesen started the deepest off all finishes in the top five as he came from 15th up to fourth.  He drove the wheels off his No. 44 to get to there.  He just lacked the track position to challenge for the win.

“My car was good the whole time, but it was just getting track position,” stated Friesen.  “I was stuck behind little (Danny) Varin there for a lot of laps and Matty D (DeLorenzo) for a lot of laps.  Everyone was kind of searching.  When I’d get clear track, I could rip.  I would get hung up on the bottom for a lap and lose some momentum.  It was good.  We came a long-ways.  We are just learning this car, this package.  It is different.”

Friesen made up the most ground by banging the cushion on the top of the speedway.  He ran much of the race on the outside without losing speed as his car was stable underneath him.

“These cars you can do that,” mentioned Friesen.  They are very stable.  I went where the bite was and where the car felt gripped up.  I tried to not super kill the tire. I didn’t know how long I could do it for, but I just kept going and going and picking off guys.

“Guys would go to the bottom and we’d roll them on the top.  It was good. I could move in the middle toward the end.  This place is super tough to pass; it’s very even.  We passed some good cars tonight and built our notebook.”

There were 41 cars pit-side for the event…

Pat Ward was leading his consolation event when sparks shot from under his No. 42p.  He slowed and was towed into the pit area…

Sheppard has a disappointing finish outside the top five after starting on the front row.  Sheppard lost power-steering.