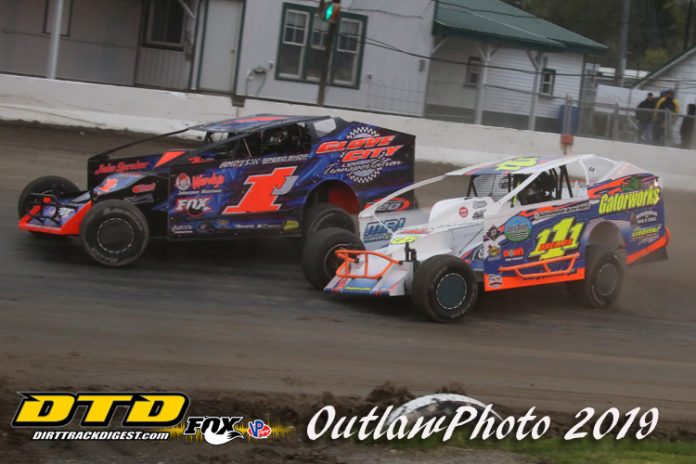 FONDA, NY – In the words of Gustav Mahler, “Tradition is not the worship of ashes, but the preservation of fire.”

After a 17-year absence, an auto race built on tradition returns this weekend at the legendary Fonda Speedway. A new chapter will be written in the legacy that is the Fonda 200 Thursday-Saturday Sept. 26-28.

The list of past winners includes pioneers, legends and Hall of Fame drivers who have been able to conquer the Track of Champions for 200 laps.

This weekend, $53,000 awaits the winner of the 200-lap Sunoco Modified event that headlines the three-day racing festival. This is the single richest event in the history of Fonda Speedway with an A-Main purse structure of $125,675 minimum.

Brett Hearn has enjoyed more success than any other driver in the 200 with four victories including the most recent edition in 2002. It is quite possible that Hearn will be the only past winner in the field this weekend with the Madsen Motorsports No. 20.

Many new names would like nothing more than to put their name on the win list for the 200.

Stewart Friesen, while not on the road with the NASCAR Gander Outdoors Truck Series, has been the dominant driver at Fonda Speedway over the last decade and is a leading contender for the 200 victory. His wife, Jessica, will complete a two-car Friesen family effort for the 200.

Matt Sheppard has been the leading dirt Modified winner of late regardless of track or sanction. Sheppard won the $8,000 Fonda Speedway Season Opener and finished a close second in the July Short Track Super Series event.

Tim Fuller, a former Fonda champion and the winner of the 2018 season finale at the track, jumps into the Adirondack Motorsports No. 24 for the event with backing from St. Lawrence Radiology.

The combination of Billy Decker and Jeremy Smith racing, who won the Short Track Super Series North Region title in 2018, are loaded for a 200-lap assault on Fonda. Decker has won many crown-jewel races in the Northeast and has his eye on this classic.

Last weekend’s big winners – Mike Gular in the Grandview (Pa.) Speedway Freedom 76 and Demetrios Drellos at Albany-Saratoga (N.Y.) Speedway – will both be in the field with momentum on their side. Gular will be aboard the Terry Fasnacht No. 2A and Drellos reuniting with the Nelson Motorsports operation.

Andy Bachetti enjoyed his strongest Fonda outing to date in the July Short Track Super Series stop and will return to challenge in the Fonda 200.

Anthony Perrego, the Orange County (N.Y.) Fair Speedway small-block Modified champion, utilized the Sept. 14 event as a shakedown for the 200 with Ray Graham’s No. 18. He finished second to Friesen and has high hopes for a $53,000 performance.

Mike Mahaney has enjoyed outstanding winning performances at Fonda, including a $12,000 payday in 2012. Mahaney will be in the house this weekend driving the George Huttig No. 35.

Orange County Fair Speedway regulars Allison Ricci and Roger Henion Jr. competed in part-time schedules at Fonda to get up to speed during the 2019 season. Both will be back looking for 200 glory.

The BBL team of Brian Gleason and Matt DeLorenzo will be out in full force for the weekend. Gleason ran as a regular at Fonda this season, while DeLorenzo made only select appearances.

Rocky Warner is on the heels of a career defining Fonda season aboard Jake Spraker’s No. 1J, taking the track championship. Warner already won the Vermont 200 at Devil’s Bowl (Vt.) Speedway and is geared up for the post-season classic.

The father-and-son combination of Bobby Varin in the Palmer’s Service Center No. 76 and Danny Varin driving the Ed Monger No. 93 both reached Victory Lane at Fonda this season and will be ready to challenge for the $53,000.

Dave Constantino emerged into a Sunoco Modified contender with the Laudy Hoyenga No. 34, winning his first Fonda feature this season. The second-generation driver is ready to tackle the 200.

Thursday (Sept. 26) is reserved for camper and trailer parking in addition to open practice for those seeking lap time on the famed Track of Champions layout.

Friday (Sept. 27) will include 15-lap qualifying races for the Sunoco Modifieds, the Patriot Sprint Tour with a full program plus a make-up feature event postponed by rain on May 25, Pro Stocks competing for $1,000 to win, Trackside Body Works Street Stocks in a $500-to-win event and Four Cylinder Cruisers.

Reserved grandstand tickets are available now and can be obtained by calling the speedway office at 518.915.4395 and leaving a message for Angela Hanson. Office hours for walk-up sales are posted on the speedway Facebook page as well.

A Fonda 200 information page can be found on the speedway website: http://www.thefondaspeedway.com/fonda-200/