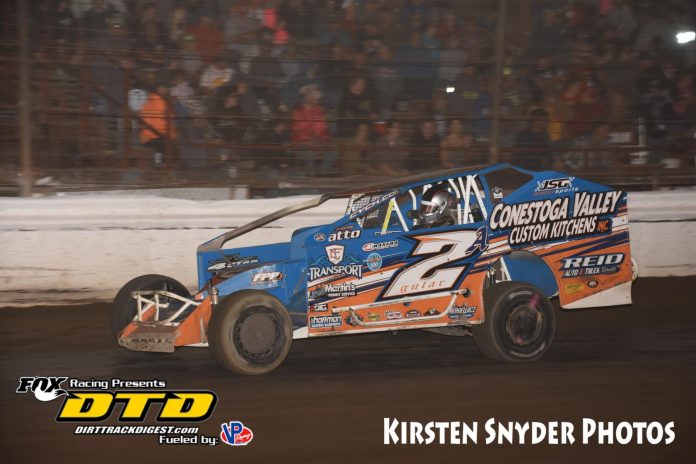 Mike Gular, driver of the No. 2A, and car owner Terry Fasnacht had a plan back in 2017 when they got together to compete as a team. That plan was to be recognized as a topnotch team on the Northeast Dirt Modified circuit. After a few strong end of the season runs back in 2017, the team came back the following year with new equipment ready to embark on their new challenge.

Chasing both the North and the South regions on the Short Track Super Series, the team took on some of the best racers in the Northeast culminating with a huge win the “Hard Clay Finale” at the Orange County Speedway.  This gave Gular and the team a very respectable fourth-place finish in final North series points standings. Gular also managed to do what no other driver has been able to do since 1999 other than Craig Von Dohren, Jeff Strunk and Duane Howard, which was to win a points championship at the Grandview Speedway. The only caveat to that title was that Gular wasn’t able to win a race at the speedway on the way to his championship season. Although Gular won the title driving for owner Rich Stankiewicz, both teams worked together to accomplish that goal.

At the end of 2018, Stankiewicz decided to sell his equipment leaving Gular to just concentrate on the Fasnacht team. Original plans were to defend his Grandview title but the team decided to switch their Saturday night venue to the Orange County Speedway mostly due to the money being offered, but Gular also knew that if the team wanted to improve it needed to branch out and run at a different weekly track and also a track that utilized Hoosier Tires instead of the more prominent American Racer Tires used on the tracks Gular was accustomed to racing at. Wanting to compete at some of the other big paying Modified races, Gular knew him and his team had to gain experience running the Hoosier brand of tires to be able to compete.

Although expanding his racing experience and switching tracks was something Gular knew he had to do, the Boyertown, Pa., driver still considered Grandview Speedway his home. Only a short distance from his house, Gular and the team attempted to compete at Grandview as much as his schedule would allow. Gular managed to win one of the years Thunder on the Hill series at Grandview and was looking forward to competing in the season ending Freedom 76, a race he has always wanted to win since he started driving at his home track.

Saturday night, September 21st, 2019 that dream came true as Gular dominated the 76-lap event. Passing both Rick Laubach and Frank Cozze as they caught lapped traffic on lap 19, Gular never looked back and went on to take the biggest win of his career along with a check for $25,000.

Gular went onto talk about how running so many different tracks helped the team coming into the 76er.

“Traveling helps, we learned a lot this year. We wanted to try and learn some stuff and expand what we knew and I think it’s paying off. We’ve got two wins here and that’s a lot more than I’ve had here the last couple of years.”

Winning this race has always been on Gular’s radar and with this win it should only spring the team onto bigger and better things.

“Confidence is everything, so this is huge going into the next couple of big races we’ve got. We have Fonda next weekend, then Oswego and Eastern States and we’ll see whatever we hit up in between there.

Gular went onto talk about the pass that put him into the lead and how lapped cars came into play.

“We were sitting third and we’re in the right spot at the right time,” explained Gular. “I was watching where they were going with lapped cars to spot a weakness and find a spot to get past them. They checked up a little bit just trying to be patient with the traffic and I was able to sneak by them.”

Once in front, Gular pulled away to a safe advantage. With a long green flag run, that also means having to navigate your way through lapped traffic which Gular did with the precision of a surgeon.

“The lapped cars were really good tonight,” cited Gular. “Everyone held their line, it was good. We were trying to tiptoe around the middle there and never had a problem. They (the tower) were good on the radio tonight too”

After the long green flag run, the yellow was out on lap 68 bunching up the field and giving everyone a shot at the leader once again. The yellow flag would come out on two other occasions during the last eight laps of the race, but Gular was up to the challenge every time but it was not without some consternation on his part.

“I was not looking forward to those restarts, but I was happy to get out of lapped traffic a little bit and get some clear track in front of us,” said Gular as he talked about the last few laps. “I felt we were really good on the bottom. I could tell from running here all the time and all the years I ran the bottom and I just felt if anyone was going to go around me it was gonna have to be on the outside.”

Talking to Gular as much as I do, I know how hard he and his team work to make this deal successful and the driver knew as well what it means to everyone involved.

“The guys on this team bust their ass, everyone has full-time jobs and we all work,” a thankful Gular explained. “We run a lot of races in the summer and it’s paying off now. We’re getting a lot of experience. It’s a grind and we keep grinding all of the time.  It’s nice to get this for them and for everybody that’s involved. You know, Terry (car owner Terry Fasnacht) spends a lot of money and we have a lot of sponsors who help us out. It’s just huge! This is the biggest win of my career and anytime you can put your name on this win list for Grandview Speedway is just huge. I have a championship and now this, we just need the Forrest Rogers and the opener (Bruce Rogers Memorial) and we’ll be set.”

Getting to know Mike and his team as I have over the past two years, I have witnessed a good driver and team mature into a great driver and team who have to be considered contenders anytime the Fasnacht No. 2A pulls into a speedway.

A confident Mike Gular is a dangerous Mike Gular and it wouldn’t surprise this writer at all if we see Gular and his team once again hoisting another big check and trophy as the season ending big races are upon us.

As always, feel free to email me any questions at dirtracefan25@hotmail.com or contact me on Twitter @dirtracefan25